Third 'Kings of War' game in 3 weeks, this time against Adrian. Adrian had dragged out a little used Orc army now many years old, and as usual my Dwarves took to the field, keen as ever to seek redress for any wrong doing, imagined or real!! The game was a 'Kill and Pillage' scenario with 1100 points per side.

The Dwarves adopted a defensive positon (now that was a surprise), seen here on the left, as the Orc hordes swarmed forward. 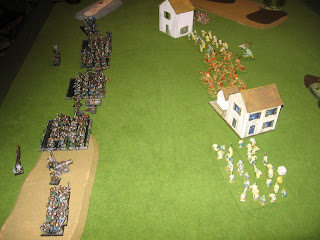 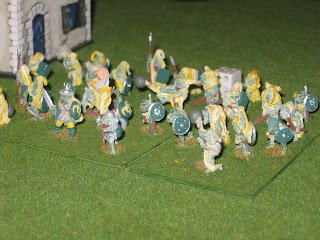 The Orc army was led by a Krudger on a flyer (sounds like something that would make your eyes water, and in this particular case it did!!!) 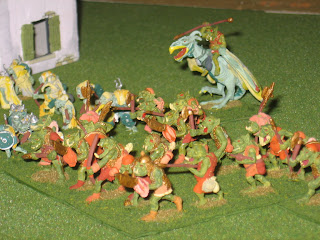 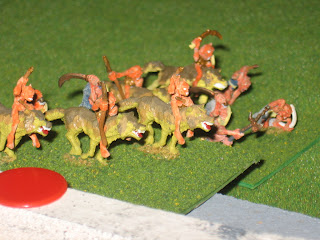 After inflicting several turns of artillery fire on the Orcs as they advanced, thr Dwarves then launched an attack against the advancing hordes .. SPLAT!!! 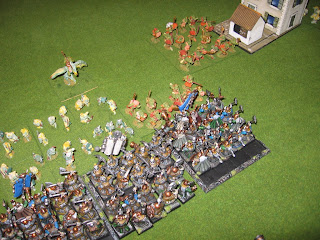 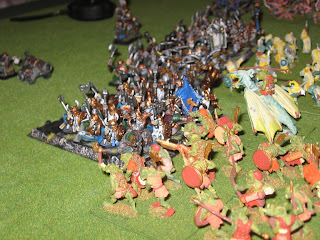 The initial assaults routed one unit of Orcs, but bounced off the remainder.

Foolishly (I'm a slow learner) I had yet again placed the Dwarf Berserkers on a flank. They attacked an Orc unit, but were then in turn hit front and flank by Orc units, and routed. They dish out the attacks on the charge, but are not too hardy when the enemy strikes back. 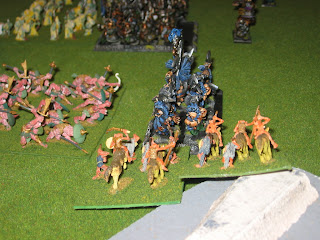 Meanwhile the combats continued in the centre, while an Orc Horde routed on the Orc left flank, after taking too many hits from Dwarf cannon and rifle fire. 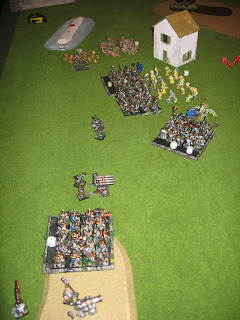 The Dwarf Horde of warriors was then hit in the flank and front, and... ouch!! the first Dwarf rout!!
The Dwarf King meanwhile was busily engaged holding back the Orc riders. 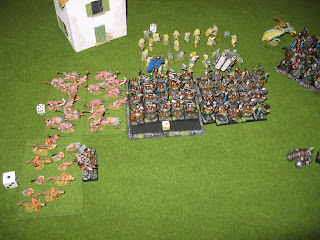 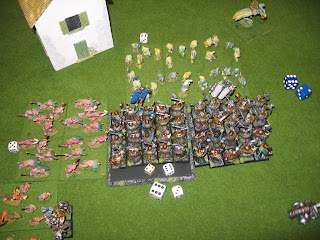 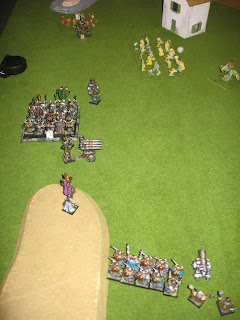 The Orc Krudger swooped in and attacked a unit of Dwarves in the flank.. another Dwarf route!! 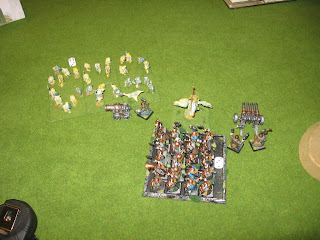 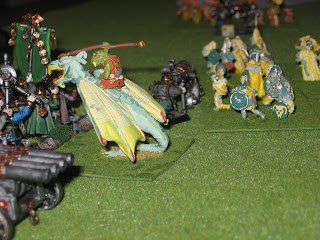 And the game was over - 6 turns for each side, and a solid Orc victory.

This was interesting. The Orcs (as with other game systems) dish out the punishment, but are also relatively fragile. Their low Nerve value means that they tend to route relatively more easily, but when they get into contact.. ouch. And the Dwarven toughness makes them relatively more resilient.

The Orc Krudger costs a lot of points, but is well worth it.. he dished out a lot of Dwarven pain!!!

The game ebbed and flowed nicely. In the early stages of contact the Dwarfs grabbed the initiative and several Orc units were routed. After 4 turns it was looking like a Dwarf victory. But this is a game of flanks, and it was the ability of the Orc riders to get on to the flank that caused the Dwarf collapse.
At 1100 points these are still small games in KoW terms we think. On the one hand the larger games will allow more resilience for both sides. On the other hand the games may possibly have a feeling of sameness about them (and that's after only 3 games). I'll reserve my opinion on that until we have played more games. Certainly for the Dwarves the Orcs presented a different set of challenges to those met when facing the Humans.
at July 09, 2011 2 comments: