"This is the BBC World Service. News today of a British victory in France, as forces from the BEF blunt the advance of German Panzers in Northern France. Troops from 7th Panzer Division believed to be under the command of German General Irwin Rommel were stopped in their tracks by a determined BEF defence. Field Marshall John Vereker The Right Honorable The Viscount Gort spoke glowingly of the grit and determination of the British troops under his command as he met with Prime Minister Winston Churchill and the War Cabinet today in Whitehall. "We gave Jerry a bloody nose today" he said." 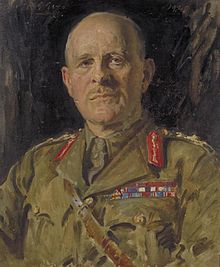 Dark rings surrounded eyes, lines carrying days of grime streaked from the corners of mouths, as if hope had fled in the face of despair. The Brigadier scanned those same faces, seeking out signs of hope.

"I know this regiment has suffered losses. I am only too well aware of the fate of my predecessor. But I am not him. Retreat is a contagion that, once admitted, takes hold like an epidemic in a poor house. Gentlemen, we are here to exorcise those daemons. We are here to do a job. We have a nation looking to us, depending on us, praying for us. We must be the Drake to Spain's Phillip. We need to heed the cry 'They shall not pass'. We have a job to do. Now, let's be about our business. There is much to do this day. Frankly, I can think of nothing better to quote than Shakespeare's Henry IV:

"And gentlemen in England now a-bed
Shall think themselves accurs'd they were not here,
And hold their manhoods cheap whiles any speaks
That fought with us upon Saint Crispin's day."

Light and hope appeared on the faces that looked towards him, and the Brigadier smiled.
"Guns, we can't have the performances your boys gave before Arras. I want your guns up close and personal. Jerry is too strong to leave our boys unsupported."
"Sir, I have a battalion tasked to close support for 1 Battalion, and another from division allocated just for the regiment. My boys will be there, trust me."
"I do. Thank you. Tracks, your boys are allocated to 2 Battalion. I need you there, I need you mobile, they need you on form and ready to best Jerry. We must keep the German armour at bay. They cannot be left to wander at will amongst our infantry as they did three days ago at Arras."
"We have all available runners allocated, Sir. A mix of  Matilda 1s and IIs, some straight from the workshops after their long march."
"Keep them hidden. James.. it's essential that you stay in close contact with Tracks. Don't be afraid to use them. Henry, you are our reserve. 3 Battalion must be ready to move instantly, no delays. I expect 2 Battalion to bear the brunt of the German attack. Your move may be the difference between their survival and their loss. I'll settle regimental HQ alongside you. Keep the battalion alert.. our whole future may ride on the swiftness of your move. "
"Sir, you can depend on us."
"Trust me, I am Henry. Right gentlemen, let's be about our work. I am sure Jerry will be here before the morning is more than a mere pup." They stood and hurried from the command tent, intent upon the job they had trained for.


1 Battalion also had the regimental AA platoon (a 40mm Bofors battery) attached to it. In the absence of the Luftwaffe above the battlefield, this battery gave good service in direct support of 1 Battalion infantry before being destroyed by the German 150mm artillery battalion. 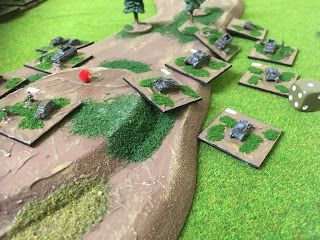 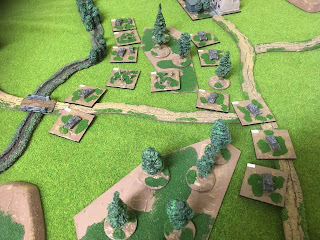 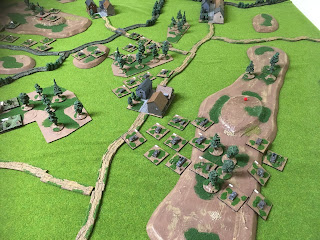 In the meantime 3 Battalion, the regimental reserve, was ordered forward to support 2 Battalion.. the attacking german infantry now faced massive odds. The British artillery, and the battalion 3" mortar tubes from 1 and 2 Battalions, had taken a devastating toll on the German infantry. British 60pdrs tasked with counter battery missions destroyed the entire German battalion of 150mm guns that had taken a heavy toll on 2 Battalion's forward positions.

The German advance was halted,. The attack across the river was in danger from the 1 Battalion counterattack which threatened its own left flank. The target of its attack, 2 Battalion, was now reinforced by 3 Battalion, leaving it facing overwhelming odds. The German Panzer attacks on their right were halted by the indomitable fighting from the 7th RTR Matildas, against which it was helpless. The German 88mm flak battery had been positioned in the wrong place to combat the RTR vehicles, and was eliminated early by the RSA 25pdr fire.

This was another excellent game fought with the Spearhead rules, using our 6mm armies. The vehicles and infantry were from Heroics and Ros, and the forces were developed using Keith McNelly's scenario generation system. Keith was attacking using his German force, and I was defending using my BEF force.

The game ended with a British victory. The BEF had 5 object points, the Germans 4. We had both used an Option A which reduced our totals by 1 each, while the British had a small manoeuvre battalion, the Divisional cavalry (MkVIs and Bren Carrier Platoons) uncommitted and off table at the end of the game. The Germans had one battalion (the 1500 mm off table artillery battalion) destroyed.
This was an outstanding evening of gaming, the battle lasting four hours before we 'called time'.
at February 02, 2019 1 comment: