HotT Carnage.. and it certainly was!!!

It was Christchurch's first.. HotT tournament that is, and 8 layers gathered (it was meant to be 10, but 2 were unavoidable detained..). The tournament followed the Berkeley format, with 5 rounds of play during the day. The players and armies fighting it out for the 'Emperor Dragon' trophy were:

These two photos from the day: some of the guys at play.... 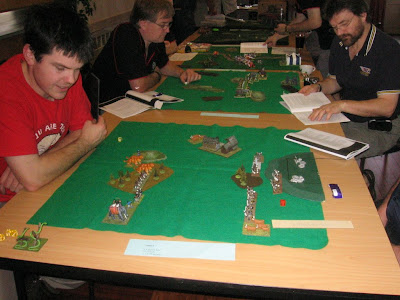 And the Lost Worlds army messing around with some Indians... 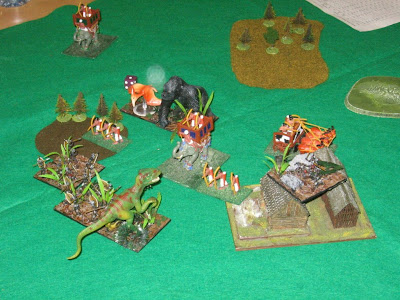 The games were exciting, many of them close calls, and the Gods were as fickle as you'd expect, coming and going as they saw fit. Notable for their absence were Dragons.. none to be seen in any army lists (no wonder they didn't appear on the table!!).

The overall winner of the tournament, and so holder of the "Emperor Dragon" trophy, was Basil (club president.. no connection there.. truly!!). The best concept army was won by Gordon with his Zulus (a close one, as Gordon vied with Kevin and his wonderful Cavemen for the prize).

Special mention of Simon who, despite only 3 games before the day, managed to finish first equal on tournament points. He lost to Basil on casualty count back. Well done Simon.

Kevin managed the record for the greatest casualty count in army points.. a hard general, but totally in character with his Caveman army theme. Kevin had also played very few games before the day.

Many thanks to the guys who played... as you'd expect the games were played with a great sense of sportsmanship - what else would you expect with great guys and a few games of HotT. Plenty of mayhem and fantasy worlds murder: HotT Carnage - it certainly was.

Finally thanks to the Christchurch Wargames Club for supporting the event.