Our experiments in playing Spearhead with 20mm figures and models continues. In Spearhead everything should be based on bases 1.25" square. This creates more accurate combat frontages, and troop densities.  The issue is the size of vehicles. Vehicles in 1/72 obviously don't fit on bases 1.25" square. This means that individual models, representing troops of 3-5, vehicles occupy a disproportionately large area on the table surface.

In our last game we played with a scale multiplier of 1.5X. This meant that vehicles were closer to the right densities, although correspondingly infantry on the standard 1.25" bases occupied too small an area. Even though we played on a larger table area, it wasn't 1.5x the standard 6'x4' area that we usually use. Therefore troops moved further, action was joined much sooner, weapon ranges were longer and so more of the table area could be dominated by fire, and the opportunity to develop the game more fully with manoeuvre disappeared as you were on your enemy far too soon.

This time we played with the standard ground scale (this is what we do normally with our 20mm Great War Spearhead armies anyway).

The game was set in 1940, probably in France. Jim defended with a British infantry division defend list, two infantry battalions supported by A13s drawn from an Independent Armoured Brigade, and the divisional artillery. He also had a battery of the Corp 4.5" for counter battery work. Andy and I attacked with two Motorised infantry battalions from the Schutzen Brigade, and tanks from an armoured regiment, all from a Panzer Division. They were supported by divisional 105mm guns, with some 150mm for counter battery work.

Jim had taken the opportunity to keep three stands hidden (an option for the defender in the scenario generation system). What were they, and where did he have them deployed? 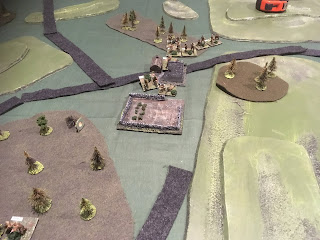 There is a vicious counter battery battle going on too, with Royal Artillery, and German field artillery, all taking casualties.

Another great game. We agreed that reverting to the standard ground scale allowed the game to develop. There was more tactical nuance for both sides.

Our conclusion is that despite the outsized vehicles, the standard ground scale gives a better game.
at October 13, 2018 3 comments: