Second game in a week, our response to the frustration of having to spend a lot of playing time wading through the 4th edition 40K rules book trying to find the right section/rule (partly a comment on the rules book/indexing system .. or lack of .. and also on the infrequency with which we play this rules system). Again Necrons versus Guard, the mission to hold the central objective - the ruined temple in the centre of the table.


Adrian chose to deploy his Monolith at the outset of the game rather than have it come in from reserve. I gained first turn.


My plan was to stack the left and centre, with a strong merged squad held back from the temple in the woods to provide cover, but within 12" of the objective. As the Guard is know for its firepower I wanted to allow Adrian to take the centre, and soak his troops in fire from Guardsmen, autocannon, Heavy Bolters, and a lascannon. I had taken a special weapons squad equipped with flamers, mounted in a chimera, ready to assault the Necrons who I expected to take the temple. I held several squads in reserve, and had a unit of stormtroopers mounted in a Vendetta gunship. I expected to drop them in amongst the Necrons to assault them.

The temple ruins are now occupied by two squads of Necron warriors, and a unit of Wraiths. They attract a lot of fire as per the plan and .. nope .. no effect.


The position is now pretty hopeless for the Guard, and the withdrawal begins. Can the Imperium ever halt the Necron advance? Probably not while I'm in command.

I'd modified my Guard list from the last game.. well more of a simplification really.  I took almost all of the heavy weapons out of the squads to make them more mobile/flexible. I added in a special weapons squad, and mounted it and the Veterans in chimeras. More mobile, but I failed to exploit that mobility.

I think the force is more flexible and easier to use, but the plan didn't work. I over-estimated the ability of the Guard shooting to take down the Necrons.

The Imperium is in danger ..

The Necron incursion had begun. The Imperium had pulled troops from sectors across the galaxy as it marshalled its forces to halt the threat. The very future of mankind was at stake.

Adrian and I like to get those lovely 40K troops out from time to time and push them around the table top in games that usually involve lots of laughs, lots of grumbling about the rules system and. . oh yes .. beer. I've commented before that we both became heartily sick and tired of the constant rules/codex updates (we do understand that it is a valid business strategy, we have simply opted not to buy into it figuratively or literally). So some time ago we opted to 'freeze' our 40K games in the 4th edition paradigm. It requires one of two tweaks, but as we never game in the tournament scene it really doesn't matter. 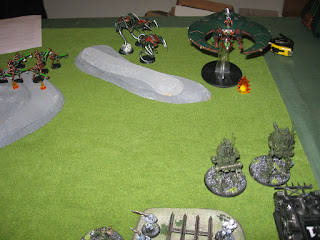 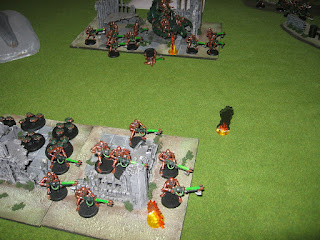 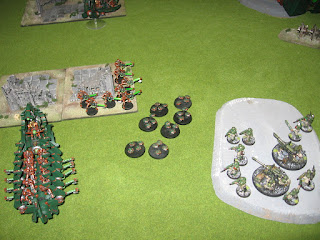 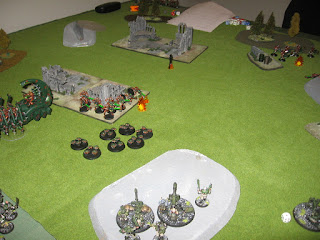 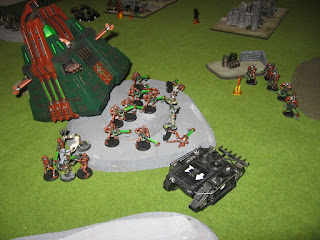 The game ended with a Necron victory as they held two table quarters to the IG one. It had been a lot of fun, but took quite a while as we haven't played 40K often enough to get past the constant referrals to the rule book trying to find vague references tucked away in illogical places in the rule book (well, that's how it has seemed to us anyway).

For me, a simpler IG army list is in the offing (as I often forget the special little bits/capabilities that some units bring). The army as fielded used just about everything I have, but there is the capacity to improve things. Taking Heavy Weapons out of the squads and using heavy weapons squads will give greater mobility to the infantry squads without compromising firepower. I am also going to trial a special weapons squad mounted in a Chimera.