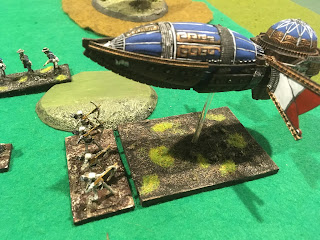 The Gods play with their subjects as ....

I write to you from the scene of a most cataclysmic encounter against beasts so horrendous that they leave the blood curdled. With several days to pause and recover, we once more resumed our advance as we attempt to claim the land of Guayabo for the glory of Her Majesty.

I insisted that our Hero Lieutenant Winstanley rest and recover more fully, and so he say back with our camp while the remainder of my forces advanced once more against the creeping horror that stood barring our way. With landing operations complete I was able to deploy the full force of Her majesty's steam powered robots, along with a regiment of Her majesty's glorious lancers.

Once more the same eerie sounds rose from the spiders, yet again (we assumed) seeking to bring the power of the Gods down to fight for them. We pushed forward despite the terror that rose in our hearts, freezing the very blood in our veins.

With the core of the spider hordes destroyed our glorious forces were able to resume their advance, albeit a little more cautiously. We were wary of what further horrors this strange seemingly blighted land might hold.

It would seem that even for the spiders, their Gods play with them as children with their toys, spurning those on whom they had previously shown favour. Hence ours was the victory.