The first photos are in... my first batch. These are the first traitors for the Lost and the Damned army... I have chosen to paint them in a range of camouflage uniforms to represent their diversity.

Too little time has elapsed for these guys to have adapted their uniforms, or to have succumbed to the forces of Chaos in any physical way. This first batch has jungle, desert and arctic camouflage uniforms. I loved painting them. 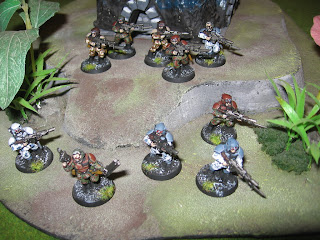 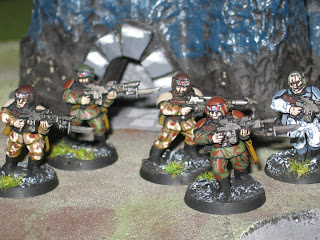 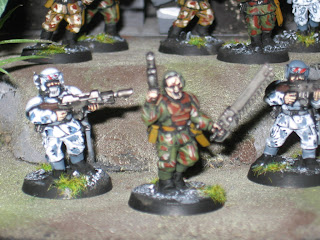 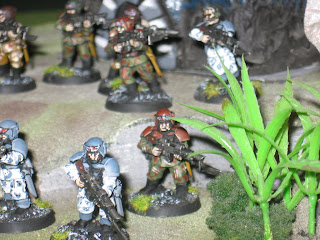 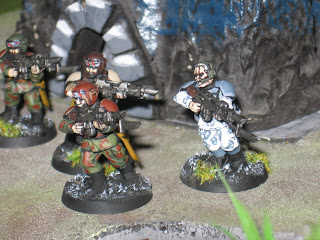 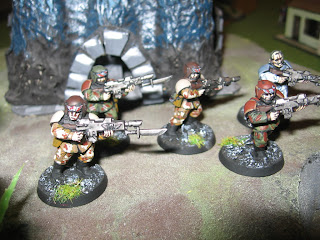 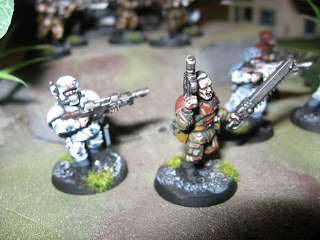 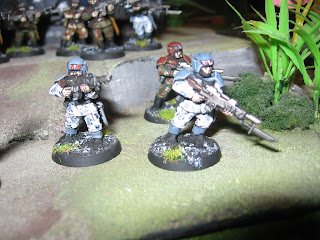 I pondered how I'd show their traitor status, and thought that for such an early formation a double slash of blood across the imperial eagle would do. I need to consider more conversions though.. must be some interesting things I can do with equipment, poses etc.

MUST THINK CREATIVELY.. "Didn't get where I am today by thinking creatively, Reggie!! But there are bound to be mutations in another squad.

Now for the next batch of ten.

I'm not one to shy away from a challenge, nor to issue one (although sometimes foolishly it seems). So, having been hell bent on finishing projects, I thought I'd use a challenge as a little more  motivation to finish a very long standing challenge: a brand new 400 point Combat Patrol army for Warhammer 40K. Specifically that Traitor/Lost and the Damned army I bought the figures for approximately 8 years ago.. yep, 8 years.

Now, a challenge to oneself is all well and good, but it's even more fun when others participate. So I've manage to convince Adrian and Andy to embark upon the challenge too.

Andy has opted to paint the Valhallans he bought some (he forgets just how many) years ago, while Adrian yesterday bought two boxes of the new Necrons for something different.

I must admit I may have cheated a little. Remember those heavy weapons I finished a couple of weeks ago?  Aha.

And the first 10 traitor guardsmen are nearly finished, so I have a little head start. But - all's fair in love and war (and painting challenges) they say. For my part, there are more traitor guardsmen, and some chaos space marines (again bought 8 years ago) to paint. I have several fan codexes from the web that I can work to for the L&TD, although rumour has it traitors will re-appear in the next iteration of the Chaos codex. I think a Hellhound might be in order too, and that's a new purchase, but we do what we have to do, don't we!!! I'll paint some cool stuff, and see where that leaves me.

The concept for the traitors is an unholy assembly of men from different units, men who have not yet done more than come over to the forces of chaos. To represent their many world/unit origins I'm painting them in array of camouflage pattern uniforms. The first 10 are already looking pretty cool.