Andy unveiled his latest HotT army.. Weird World War 1... a mix of weirdness that is a testimony to imagination. Albatross flyers - fair enough. But .. ghost hordes (the countless dead of WW1 returning again, and again, and again), and zombie blades and shooters: German infantry in gas masks.

And they launched straight into a spider horde. Evil vs evil .. whoaaa. This was a standard 24 point battle. 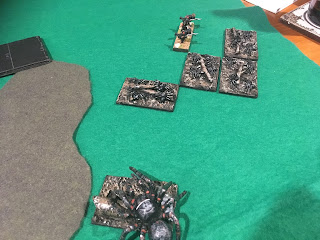 But it's all over for the Germans - casualties are too great, and victory goes to the spider hordes.

We then played  a second game, again 24 points .. this time I took another unholy piece of evil.. the Undead. Being slightly confused, I took Spiderman as a God with the Undead... oh well ... still  a legal army, just lost the flavour a little, 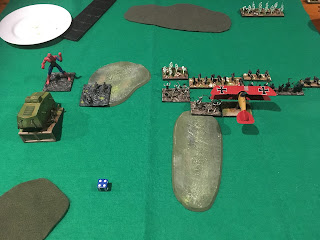 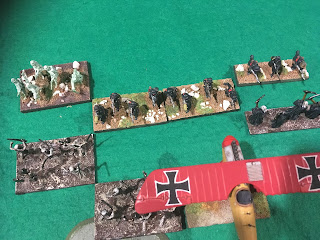 The battery on my phone died before the battle finished. The germans managed a great victory against the Undead... Spiderman the God disappeared, and the aerial hero carved through the Undead line... nasty stuff.

But two great games with a great new army. I have to say that a British equivalent is on the painting table as I type.
at April 18, 2018 2 comments: