So what's this then? eh?

Looking for new horizons? Well how about this then? It was the summer of 1976. We were 'ensorcelled' by the arrival in town of Russell P, a trainee teacher at the time, and a master of WRG's 3rd Edition Ancients wargames rules. Russell arrived with fellow teacher trainee Kevin O, and between them they revolutionised ancients wargaming in Christchurch. Russell was a master of creating armies from what little we had available, even casting his own figures from conversions sculpted from those few plastic figures available, often adapted with the application of plasticine.

I had a Roman army at the time, carefully crafted using those wonderfully historical Airfix Roman legionaries. I was longing for something different. Russell suggested Huns. Um, how does that work then? Simple, he cried. Take Airfix Hussars, carve away the head dress, clean up the pelisse, remove the sabre and replace with a javelin, a quick barbarian paint job, and you have Huns.

Several boxes of Hussars later, and I had 56 Huns, later based for a later edition of WRG's ancients rules ( I can't recall which) giving m 28 bases of light horse. They had their share of the limelight, and then we moved on. So this army, 40 years old this year, has sat in a box ever since.

I have a plan.


And they were the only army I ever tried to protect with gloss varnish. I cringe when I think of it. So, there are quite a few repairs to be made, horses to be glued to bases, riders to horses, and paint touch ups. They had a lot of use in their day.

They aren't exactly top quality, but they do have an endearing quality.  They look suitably 'barbarian', or 'hairy' as we used to say.
They'll do for Big Battle DBA. And what else he cried? Watch this space.
at July 21, 2016 10 comments:


Andy just provided me with thee photos of this latest element for his semi-historical ancient Egyptian HotT army: a behemoth. He wanted to encapsulate the idea of relentlessly powerful mummies breaking through the stonework. I thought the base was just gorgeous, gobsmackingly good in fact, so I had to share his photos. 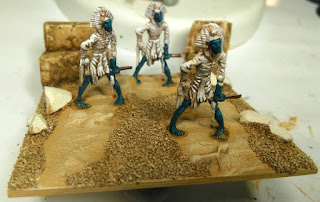 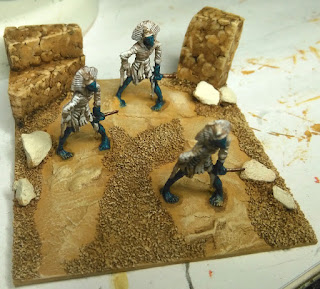 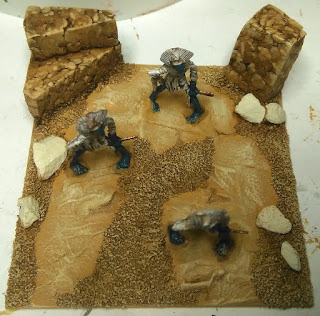