My Early Minoan/Mycenaean army (15mm Essex) was bought/painted under DBA v 2.0. The list changed slightly with v3, and so I needed to paint two bases of 4 x Auxilia.

Several months ago Jim came up with 8 suitably Bronze Age figures which he kindly gifted (thanks, Jim!!), and in the midst of the struggle to decide what to paint next, these seemed like an easy win. Despite a few hours of video conferences today for work, I managed to complete both bases. 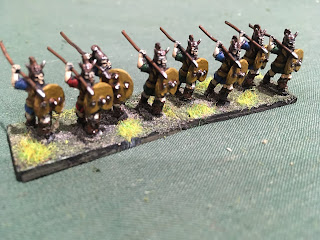 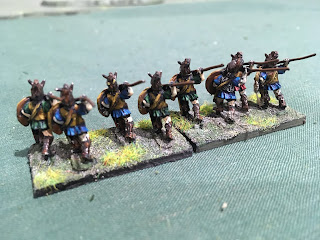 Sadly I am, after only 48 hours, once again facing the struggle to decide what to paint next. The problem is that I am struggling to find something that inspires me. There is plenty in the stash, but....

Oh well.. the struggle is real. However I suspect that when the world comes out of its enforced quarantine (a much longer period of time than many expect, I suspect) there will be a myriad of new figures and armies waiting impatiently to take to the table top.
at April 01, 2020 No comments:

A positive portent in troubled times

Some photos of what in better times would have generated much 'gaming activity. However the photos do mark the completion of two longstanding projects. The act of completion is of course symptomatic of the nationwide lockdown, something for which I much prefer the Māori word 'rāhui'.. a much gentler/kinder word.

1. The labelling of the bases for the French 1940 army for Spearhead. The first miniatures for this were purchased waaaaay back in the 90s for a different rules set. The expansion to a viable Spearhead force began last year, and the bases have sat completed in every respect except the labelling. With that done, the army is now playable, not that that will be happening any time soon but you get the idea. 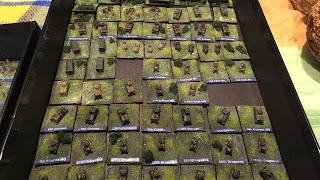 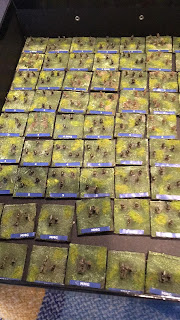 2. The last remaining artillery batteries for the Prussian army for the Franco Prussian War (played using Frank Chadwick's Volley and Bayonet rules). The figures for this were originally purchased in the 200s, so have sat awaiting attention possibly 15 years. 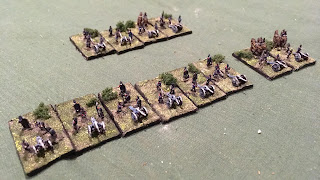 All of these figures are 6mm figures from the Heroics and Ros ranges.

So now, as we face at least another three weeks of 'rāhui', I need to look into the stash and see what takes my fancy next. In common with any 'gamer, there's quite a bit to choose from. The completion of these projects is a positive portent, at a time when it is important to maintain hope, and an element of forward focus, in order to sustain positive wellbeing.