"The Regiment will advance.."

The Regiment had been ordered to probe what Div HQ believed was an empty Norman landscape despite Intel's belief that veteran German panzer-grenadiers had occupied forward positions across the axis of advance. The Regiment was advancing, troops moving tentatively across fields and through farmsteads shrouded in early morning mist.


"One zero this is one zero alpha, over".. whispered voices.

"One zero over", more hushed tones.

"One zero alpha. We have movement in the tree line." The chatter of MG42 fire was clearly audible over the radio channel before the pressel switch was clicked off.

The point sections of the 2nd and 3rd Battalions were probing cautiously towards their objectives when fire broke out on 3 Battalion's front. Men dived for cover as 105mm rounds fell on their positions. The advancing Vickers platoons attached to 3 Battalion were early casualties. 2 Battalion continued it's advance through the village of Le Chat, it's first objective of the day, with the squadron of Churchill VIIs crawling reassuringly behind the forward troops.

1 Battalion had advanced to the heights on the left flank where it took up reserve positions. 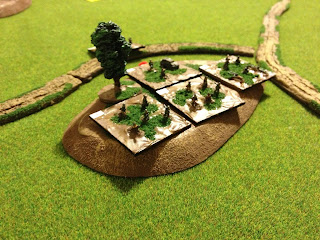 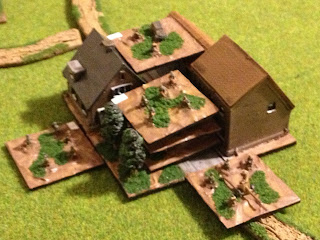 British counter battery assets (a battery of 5.5" guns) finally located the German 105mm battalion, and soon their fire had eliminated the entire battalion. However the damage had been done. 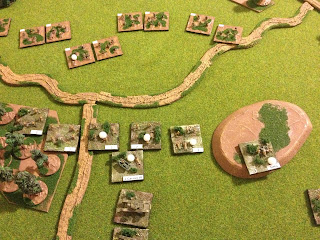 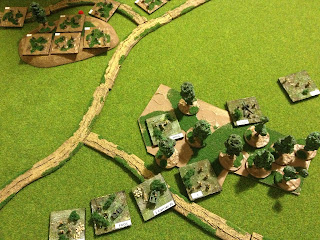 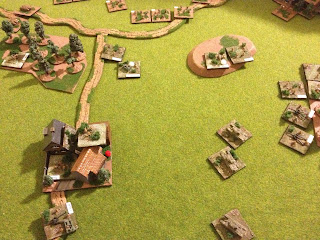 British artillery had been in high demand across the entire division, and so the 25pdr regiment attached to the infantry regiment was late in lending its support to the regiment. However once engaged the entire regiment brought its fire down on the dismounted infantry, stripping two full companies from the German flank attack.

The Churchill squadron had been caught in the wrong position and was forced to manouvre to try and counter the armoured threat on its exposed left. I had assumed that 1 Battalion, deployed in reserve, would be able to contain any flank threat, but this was proving difficult. My position was in jeopardy because I had relied on 1 Battalion to protect the left flank, and had failed to deploy 2 Battalion to be able to respond to a flank threat itself.

In addition the 17pdr company attached to 2 Battalion was positioned in anticipation of a German armoured thrust through the centre. Two of the three batteries were able to provide support to the flank against the flank attack, but the third battery was forced to manouvre to try and get into a useful firing position.

2 Battalion was close to a morale check, with 3 battalion not far behind. The Britsh troops had received a severe bloody nose, a result of poor planning and inadequate support.

Overall a great game, but a few lessons for me on list composition and deployment.

The game was played using the 6mm Ros Heroics vehicles and figures from Keith's collect (German) and my own (British). The game was developed using Keith's scenario generation system, and became an advance to contact using defend lists.

My own defend list was proved to need some development, in particular because I had no adequate Option A prepared to add to my defending force.
at August 03, 2013 4 comments: