It's been a very long time (a year I think) but finally I've been able to organise a Great War Spearhead game. I chose a small 1914 scenario from the scenario book 'Summer Harvest' because we are rusty with the rules, and so I knew that game play would be a lot slower than normal. The battle sees forces of roughly a division per side, not too bad for a smaller evening game (we thought).

The battle began with an Austrian regiment in light entrenchments holding the main ridge line. 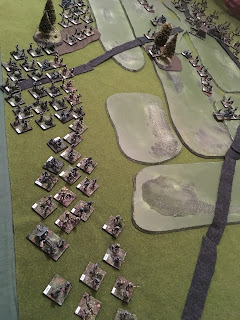 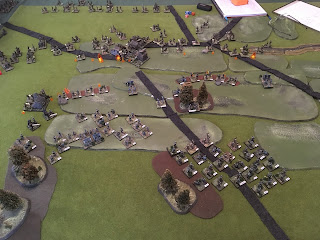 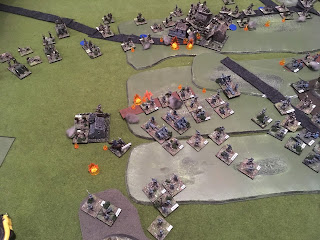 It is only at this stage in the game (Turn 9) that Jon finally makes a successful roll to get the support of his off table artillery regiment. 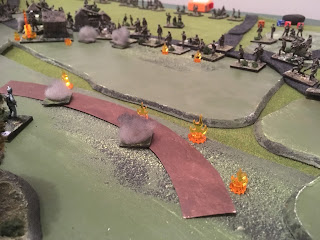 At this point night is falling and the action is abandoned. We were only able to run the game to 9 of the proscribed 12 turn.

The relatively indecisive nature of the end result was more a result of how much we'd forgotten since we last played GWSH as it was of anything else. It was easy to see how we might have each produced different outcomes with slightly different command choices. Perhaps the biggest issue for each of us was the relatively poor use of our supporting on-table artillery batteries. The bonus +1 fire factor for the on-table Russian batteries in these early months would have made a significant difference.

The scenario warrants at least another play - there are (as always) subtleties that are not apparent at first reading. this is one of the many things we love about Great War Spearhead and the historical scenarios that Shawn Taylor and Robert Dunlop continue to generate.