Hmmm... for the past 6 months or so I have been unable to do any painting of note at all. Why? Failing eyesight. Age catches up with us all, and for me the onset of presbyopia a couple of years ago has meant that seeing  anything close up has become more and more of a trial. I finally succumbed to the need for progressive lenses in my glasses in order to cope with daily life, but still found painting to be difficult. I considered getting special magnifying lenses for painting, and then.. a revelation: try painting in daylight!!!
I managed to move my painting table into a position next to a window, and.. fantastic. I have just been able to get back to painting some long suffering figures (some sample HaT WW1 German infantry.. sorry for the delay, HaT.. but at least I'm back!). That's a far cheaper solution than the dollar cost of magnifying lenses.
The only down-side is that I used to paint in the evenings, after completing work for the next day etc. Now, painting time will be limited, but.. at least I can get back to completing armies.. oh, yes.. and starting new ones.
There's the British VSF army, the Semi-Historical Chinese HotT army (and the equivalent Chinese historical DBA army), the WW1 Russians, and Austro-Hungarians, the French League of Augsberg (they've only been waiting 7 years).. and then there's the...
Oh dear!!! But at least I can paint again.
at December 20, 2008 No comments:

Email ThisBlogThis!Share to TwitterShare to FacebookShare to Pinterest
Labels: Miniatures

Good friends Nick and Stan gave me a simple piece of inspiration on morphing my recently completed DBA Early German army into a HotT army.. and a 'gamer from Temuka (a town south of Christchurch here in New Zealand) kindly offered me a GW Dryad figure for a tree man hero (saving me the purchase of an entire box of 12 Dryads).

And so the initial morphing is completed:
9 x Warband
2 x Lurkers
1 x Hero

I think the army might need a little more mobility though (as does the DBA army) so some riders might well find their way onto the painting board sometime soon. The warband composition makes this quite different to any of the other four HotT armies completed so far, and brings with it its share of playing challenges. I think some war dog "beasts" might be suitably barbarian, but finding dogs in 20m is quite a challenge. Still, I'm not one to give up easily..... morphing is fun.... 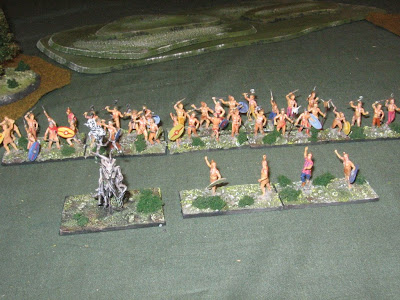 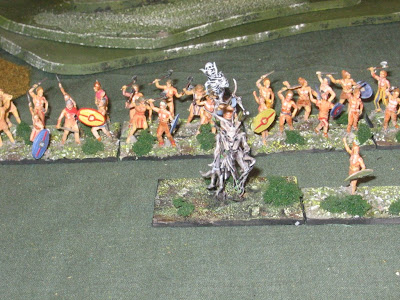 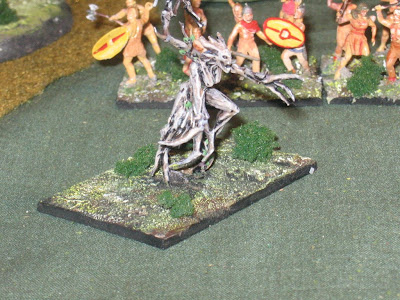 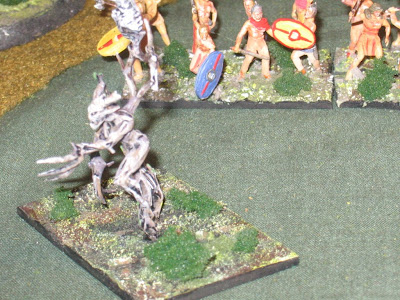