It was what the civilised peoples of the west had most feared. It was the thing that made King Tutenkap's blood run cold. He had successfully forced his way past the barbarian peoples of the steppes, and the Chief Dumnoriox had fled to the remotest corners of the steppe to lick his wounds.

But this was something else. This was the sort of thing that left Tutenkap sweating despite the cold winds that came off the steppe. Before him were arrayed the clamouring hordes of the first of the Ork races that he had encountered. But allied with them were elements of the forces of Chaos. These heinous beings stood in silence, awaiting the commencement of battle. Their power could be felt resonating through the ground, and an eerie howl swept cross the intervening ground, drowning out even the mad clamour of the Ork fighters. 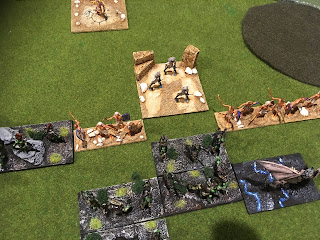 With Tutenkap disabled the heart has gone from the Egyptian army and the battle is lost.

This was an odd game. It lasted 5 turns. The match ups that I achieved with the Orks in particular meant that the Egyptians were always on the back foot. Andy's game was not helped by that succession of 1's on both PIP and combat dice.

However it was a great game. What will Tutenkop do now as he continues with his attempts to expand his empire?
at January 18, 2019 No comments: