Turkish Horse .... bringing the old to the new

I have developed a clear view of the world and nation I am trying to reflect with the VSF Turkish army. It will be a prime opponent of the British VSF army, yet I want it to look, feel, and work in terms of 'game play', differently from the British. This is a nation with proud traditions, yet one not hide bound by the past. It reflects new technologies with it's liking for airboats. It mixes the best of the old, with lancers and cavalry, alongside the best of the new with the latest mystically powered cycles. Magic combines with technology as Daemon Gods are summoned alongside mystical flying carpets. This is a rich world.

To reflect more of the traditional, the army includes traditional horse mounted riders. Turkey was after all a nation that could point to a proud tradition of horsemen and women.

So the latest figures to be completed are these four bases of 'Riders'. These are from the Strelets Turkish Cavalry 1877 set. 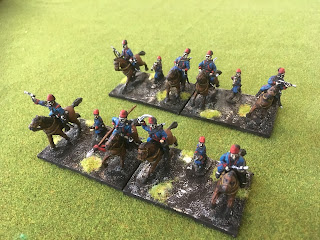 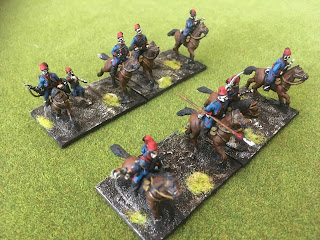 Here is the 'Rider' Corps - horse and cycle mounted. 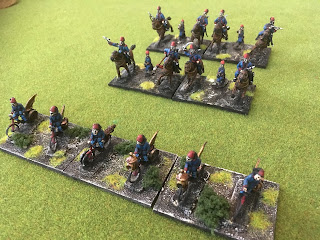 And here now the army at 60 points - not far from the goal of 72 army points for Big battle HotT. 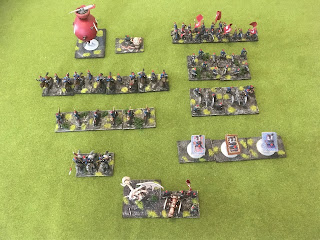 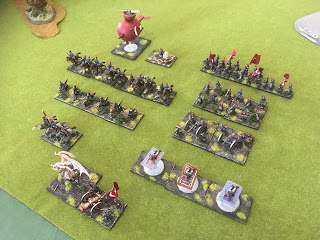 There was a cool edge to the morning breeze that swept across the plain. The winter rains had greened the normally parched landscape with a flush of new growth that would soon be snatched away as the spring heat grew towards summer.

Major General Caruthers was tired. Tired of the wind, tired of the heat, but most of all tired of the lack of pink gin that had manifested itself ever since the most recent supply caravans had been ambushed and destroyed by the infernal raiding of an enemy that refused to admit that it was beaten. No pink gin, damnit!! How was a chap meant to survive prolonged campaigning without pink gin?

To make matters worse, laid our before his encampment was yet another army of that infernal Egyptian fellow, yet more spear and chariots, yet more stone constructs and mummies, yet more... damn it, more blasted flying saucers (Caruthers' nervous tic manifested itself again at the very thought). There was a difference this time though, for through his telescope he could make out an entire wing of re-animated skeletons marching forward against his right. Damnable magic - was there no end to it?

His forces marshalled on the plain in front of the encampment, cavalry and lancers to left and right, and his aerial forces, air boats, flyers, and even Lord Chelting of Cheam (that delightful hero of a man) aloft and ready behind his centre.

He was encouraged to know that Lieutenant Winstanley, that hero of a young fellow and long tome Caruthers' protege) commanded his left wing.


Across the battlefield could periodically be heard the whirring and crackling of the strange and magical machine that Dr Morgenstein had brought to the battlefield. As the Egyptian aerial hero general looked to attach the British line from the rear, Morgenstein's machine yet again crackled to life, and the enemy hero general disappeared, ensorcelled.

Not for long however .. a throw of '6' and he reappeared in the British rear, adjacent to Caruthers' encampment. 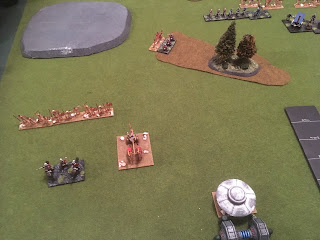 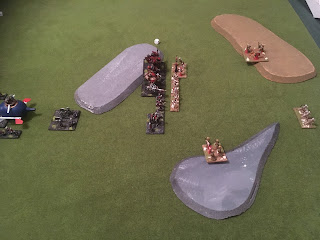 Both armies have taken significant casualties, the points count is running neck and neck. Caruthers lines up new attacks on the Egyptian centre, with Lord Chelting attacking the alien aerial hero general. However even as combat is about to be entered, Morgenstein's machine whirrs into action, and the hero is once more ensorcelled. 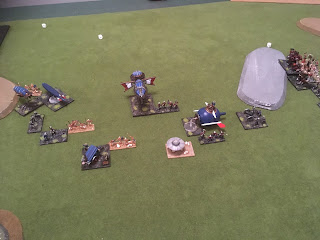 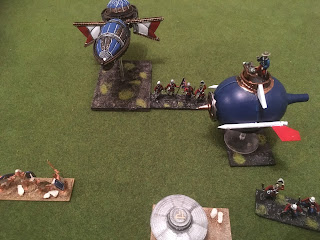 With the Egyptian army having lost its CnC AND more points than the British, victory goes to the British, but ... wow.. what a hard fought battle.

It was one of those games that on a number of occasions swung both ways.

The game was fought between Nick, Andy and me, using 20mm armies and the WRG HotT (Hordes of the Things) rules.
at December 17, 2017 2 comments:

Expanding the range of troop types in a HotT (Hordes of the Things) fantasy army while being true to one's mental model of what that fantasy army should be is a fascinating exercise.

My perception of the British VSF army, for example, had the horse reigning supreme when it came to land based mobility, reflecting  a long period of historical dominance on the battlefield, and the entrenched nature of the 'cavalry' in military tradition. So the riders are all horse mounted, and the knights are all lancers.

My 'mental model' for the Turkish army is different. In my mind, this is an army less hide bound by tradition, looking to engage more with technology. This meant that some of its riders are 'bicycle' mounted (although I'd use the term in its loosest sense). However there are still those traditional elements. In the Strelets box of Turkish cavalry there are figures that are definitely lancers, and it felt right to have a base of lancers/knights in the army (but far fewer bases than in the British equivalent).

So here is a base of Turkish lancers (yes, just the one). 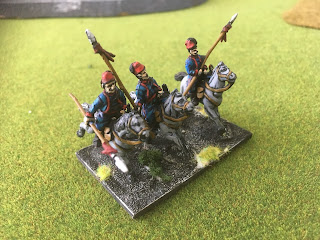