Four bodies swung from gibbets as if the hot Spanish wind had rocked them to sleep, whistling its sweet lullaby through the branches of the nearby trees. A dust cloud wafted in the breeze, raised by the thousands of French boots, lose leather soles flapping with each lift, creating a chattering counter-rhythm to the cadence of the march.

"Merde, les guerillas", and a gaunt French Grenadier hawked and spat at the feet of the swinging corpses as he marched past. Empty eye sockets, surrounded by parched brown skin, leered at the passing soldiers, taunting them at every step. Marching and fighting on empty stomachs was not the work of the Emperor's finest,  nor was fighting without ball and powder. But fight the would, even in this hell hole called the Iberian peninsular, this hades called Spain.


Keith, Andy, Richard, and I,  had gathered for a Volley and Bayonet game using my 25mm armies., with an Anglo--Spanish force pitched against a French force. The armies were each of 3000 points, compiled using the Road to Glory scenario system, then tactical postures of each side determined using the scenario cards. 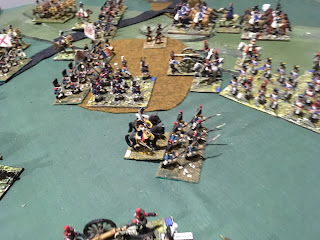 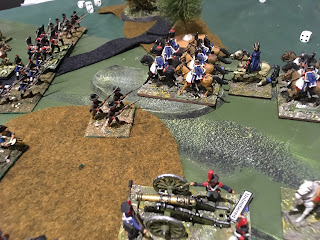 The French cavalry then strikes at the flank of the Spanish centre, and routs and drives back the infantry and the artillery supporting the British. However the French centre is in such a parlous state it will be difficult for them to hold against the Guards whose advance seems relentless. There were more photos of this stage of the action, but photographic incompetence meant I blurred them.. they were not of good enough quality to add here. The sight of French dragoons charging two supported Spanish artillery batteries, routing one and forcing the other back, was a sight for wearied French eyes.

The almost routine failure of the French in their attacks (plenty of 6s on morale, and plenty of dice that were NOT 6s in the attacks) might well have reflected the impact of constant guerilla raids, depriving the army of much needed supplies. However there can be no taking away from the skill of Keith and Andy as they fought a great battle.

And wow what a game... lots of theatre, lots of cinematic moments...and a minor victory to the Anglo-Spanish under the scenario system.
at February 22, 2020 2 comments: