Attlee and Truman were agreed. Stalinist moves to bring the remainder of free Europe under the banner of communism would be resisted. Berlin had been a warning. Millions had not died battling one tyrant only to fall beneath the feet of another. Orders were given, and the forces of the free world were ordered forward into southern Germany.

This was out first 'cold war gone hot' game, set in Europe in the late 1940s, on the supposition that politicians had not been able to hold back the warmongers. So Nick and I set out our forces for a new sort of battle using the WW2 Spearhead rules with a little of the equipment that might have been seen on such a battlefield. The game was fought with our 20mm armies, using the WW2 Spearhead rules.

The Russians were T34/85 heavy, with a JS2 brought out of retirement to support the breakthrough. Flights of new jets (MiG 15s) were on standby.

For the British, a troop of the newer Centurion IIs was added to a regiment still fielding mostly M4 Shermans and Fireflies. A flight of Vampire jets was on call.

The Russian Forward Air Controller located the British armour early and called in an airstrike. The road of MiG jets was unmistakeable and a troop M4s lay smoking. 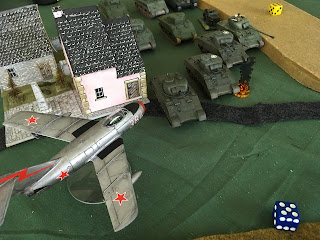 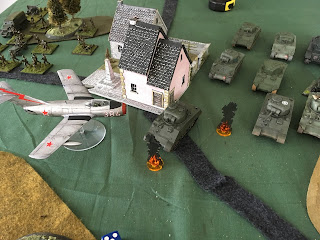 The armoured engagement continued, the British having the advantage of a hull down position. The Centurion troop is at the rear of the position in this view. 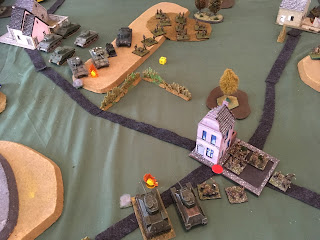 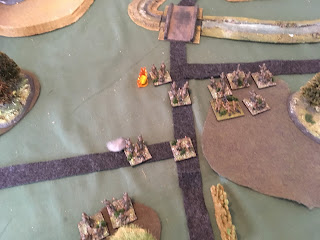 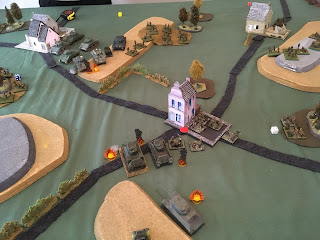 The fire of the Fireflies and Centurions takes effect, and two platoons of T34/85s are eliminated. 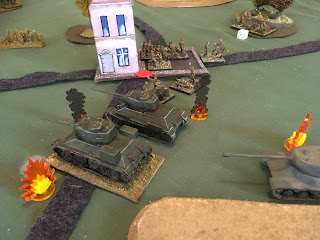 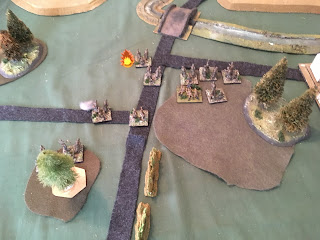 The British Forward Air Controller now calls for air support, and the whoosh of a flight of Vampires is heard above the din of the battlefield. The Russian AA support manages to distract the pilots sufficiently to prevent damage to the remaining JS2 platoon. 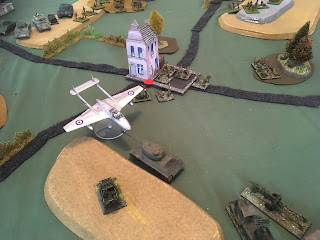 The British commander now pushes his right flank battalion forward to claim the right flank objective, but simultaneously the Russian commander commits his reserve battalion to the same objective. A hot engagement begins, and casualties mount. 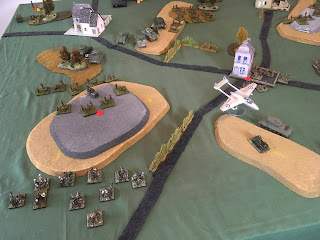 Oddly the centre British battalion is issued orders that take it directly in front of the British armour, blocking their fire.

The British heavy armour comes forward from its hull down positions 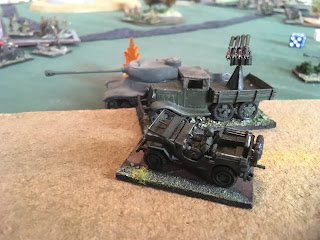 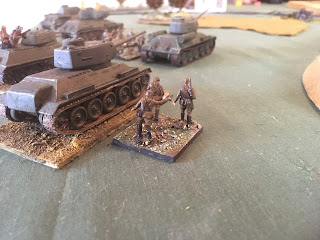 At the time we had to call it a day, the British commanded 2 VPs to the Russian 1. However the British position was now untenable, with their armour withdrawing and fresh Russian forces attacking from their flank.

The arrival of the flank march was pure luck. I had forgotten how hard it is to get Russians to arrive, managing the required '6' on the very last turn of the game.

This was the first SH game Nick and I had played for over  a year. To simplify things we removed artillery from the game, focussing on the other mechanisms. We were also after a little bit of  a visual spectacle with some of our cold war equipment. The absence of artillery was of course totally unrealistic, and will be reintroduced now that Nick has the other mechanisms firmly under his belt again.

We had to make some approximations to bring the Centurion back to 1947, as it doesn't appear in the WW2 data cards. We may not have made it powerful enough.

All that said, this was an awesome first game in so long, and a first game in this new sub period. With the addition of a few new pieces of kit it's a great way to generate some more games with all that late war equipment that sits in our cupboards.