I hadn't intended this blog to become an 'Army Diary'. This week's work however has added the first of the new infantry stands, and a few of the required MMG stands, and as these are the first for several years I thought I'd add them for completeness (but I have no intention of adding photos every time a few more stands roll off the painting pins!!)

These first infantry are painted as reservists might have been equipped -  clothed in old reserve (i.e. 1904) uniforms. There are a few (the lucky few) in this batch who have been issued with the correct post 1912 green khaki uniforms too. The bulk of the divisions will of course be painted with the green-hued khaki, but these 'reservists' will make a nice visual break, and a break in the painting tedium as well. The 3 new MMG stands are in the background. 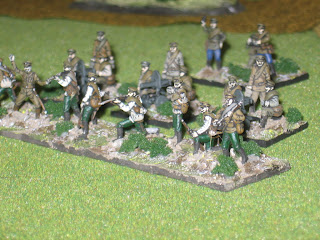 This is the Divisional Command stand, and I thought that painting these guys with blue 'Cavalry Uniform' trousers might represent the probable 'hierachy' that existed in so many 1914 armies. 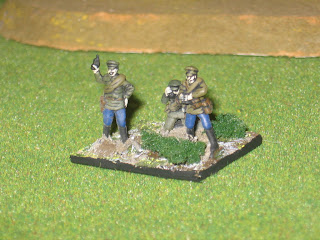 In Great War Spearhead each infantry stand represents a company, and the base size represents the area occupied by a deployed company in the context of the ground scale used in the rules. Typically a full strength battalion in GWSH would be represented by four company stands, and the theoretical Russian TOE has one MMG stand per battalion (representing the allocation of the Regimental MMGs  to the battalions). 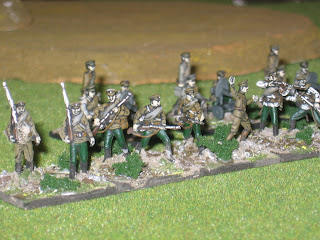