No secret - I'm a huge fan of WW1 games played using Shawn Taylor's Great War Spearhead rules. Shawn, with Robert Dunlop, recently published the revised second edition of the rules set and have announced plans to complete a series of scenario supplements. I have just proofed an early draft of the first supplement, featuring a series of 1914 western front scenarios recreating a series of actions from August/September 1914.

What can I say but ... truly excited. The scenarios set an interesting range of tactical positions and a fascinating series of command challenges, exactly the sort of thing that GWSH is so good at recreating.

If you are any sort of WW1 war games fan at all, keep your eyes peeled for this book. I doubt that you will be disappointed when the book arrives.
at March 01, 2014 No comments:

First of the new American armour ...

More pottering, still with the 20mm Spearhead forces - since I've been enjoying the assembly of kits (a pleasure I'd foregone for several decades). I recently purchased several boxes of the Armourfast kits to complete the armoured component of the US forces.

This first box contained two M4A3 tanks (with 76mm guns). Post June 1944 the US TOEs allow one or two of these to supplement the M4s, so this is the total of these more powerful tanks for the army. 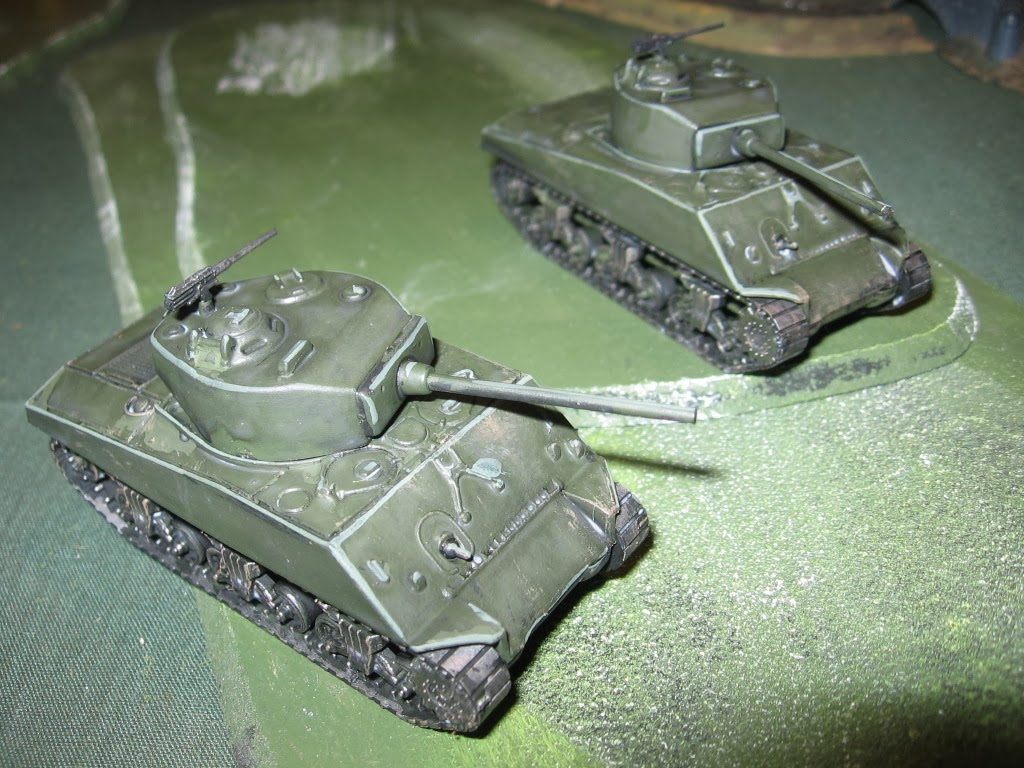 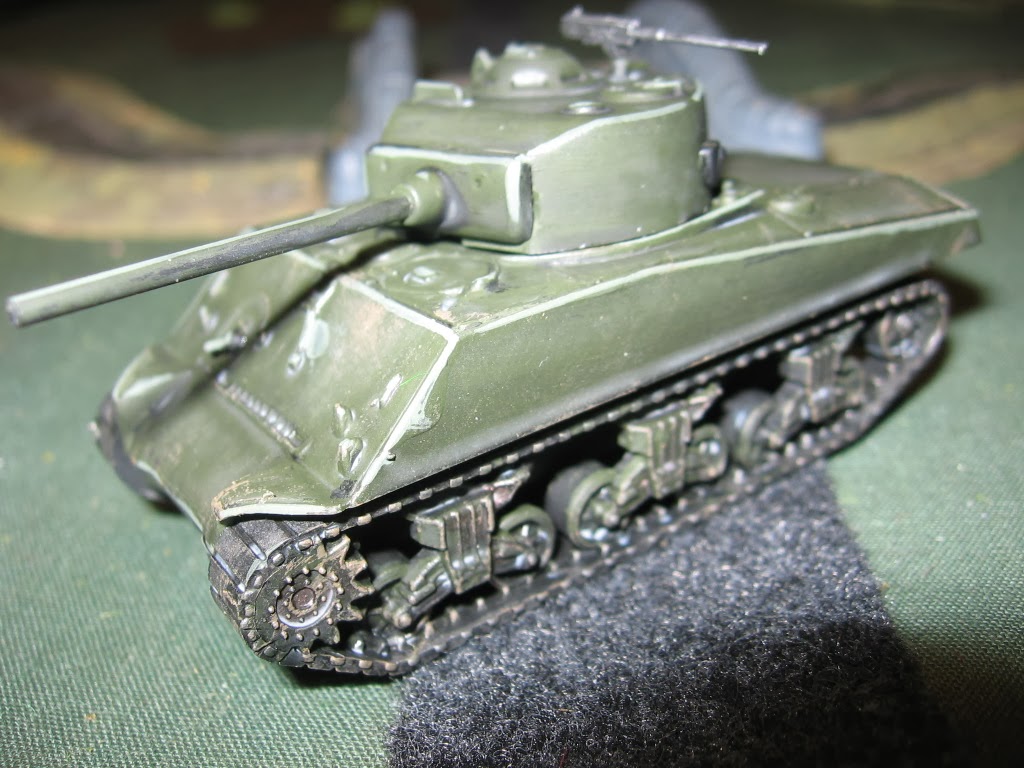 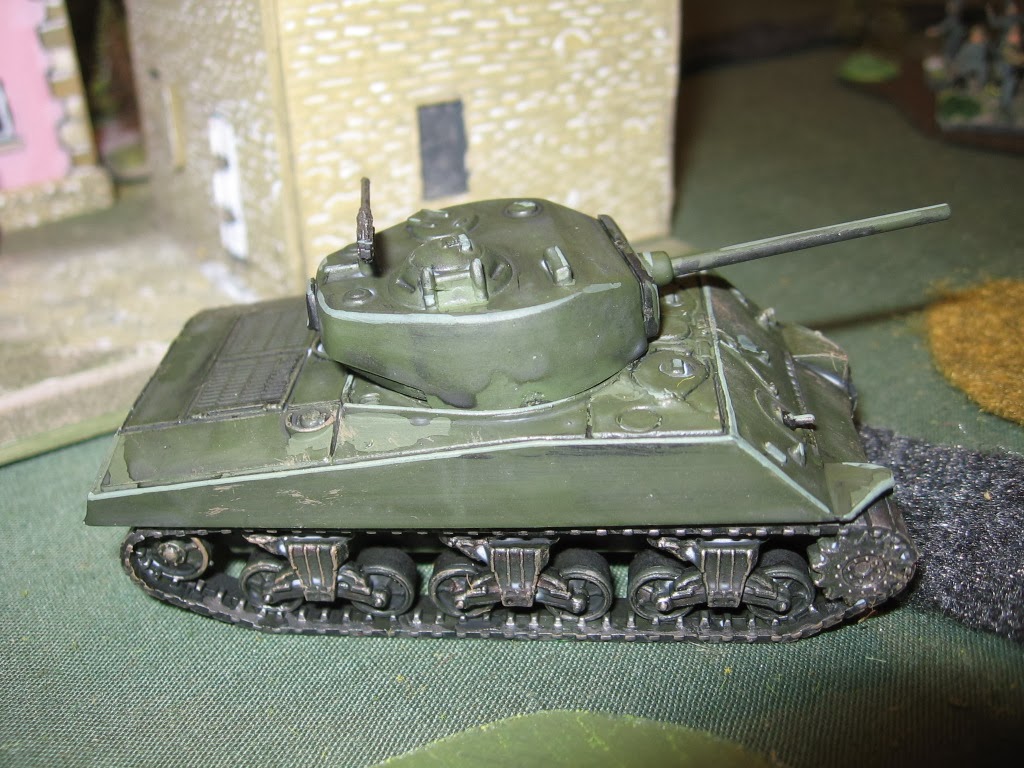 They will also of course do double duty if the 1950 Korean War project ever gains any traction. As always the Armoufast kits are indeed fast assembly, and the biggest time was taken simply making the time to sit down and paint and assemble them. The assemble cleanly, and are nicely molded. I can't comment on their accuracy.

This year 2014 has already started with far too few war games played. Friday night Andrew and Nick G came around for an impromptu 20mm WW2 Spearhead game,,,, FINALLY!!! The scene was set. Late 1943 on the eastern front, south of Kursk. The German allies have melted away in the face of the massive Russian counter offensive, and a large hole exists in the German line. A Russian infantry division, supported by a heavy tank break through regiment, is pushing forward as there are no armoured divisions are available. A German infantry regiment has been ordered forward to plug the gap, a small battalion of the valuable veteran Tiger 1 tanks committed in their support.

The Russians committed the break though regiment of KV1s on their left flank. 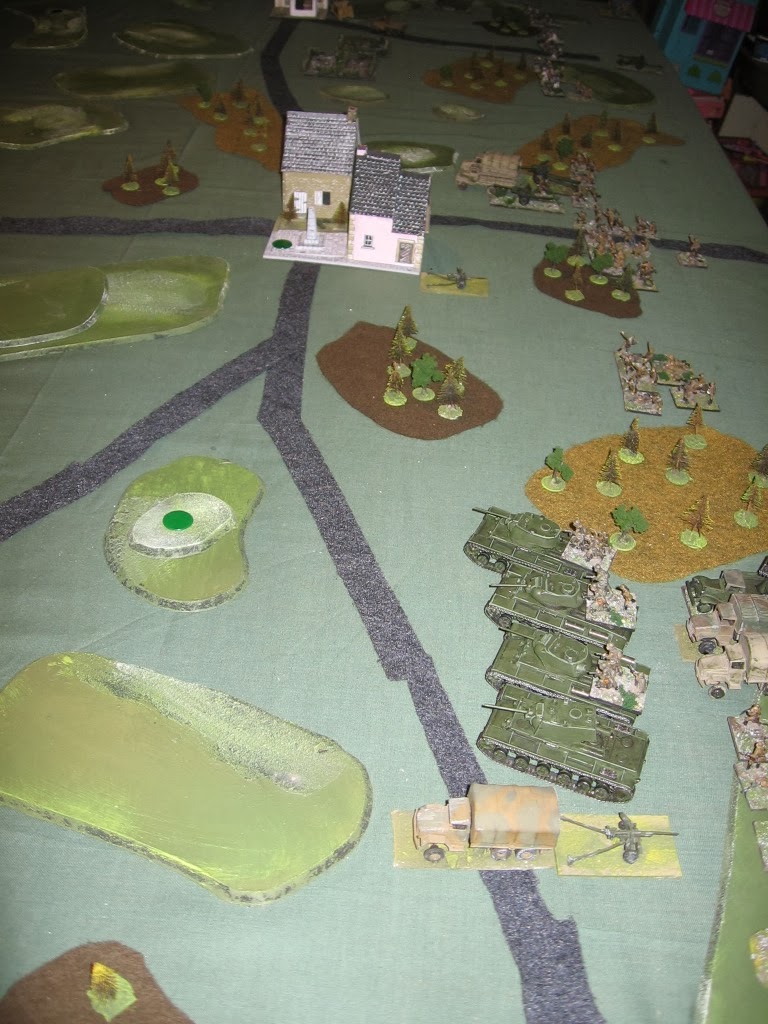 The German regimental commander deployed his centre battalion supported by his Tigers, allocating his regimental guns (Pak 40 and a 75mm IG detachments) in support of his left flank. 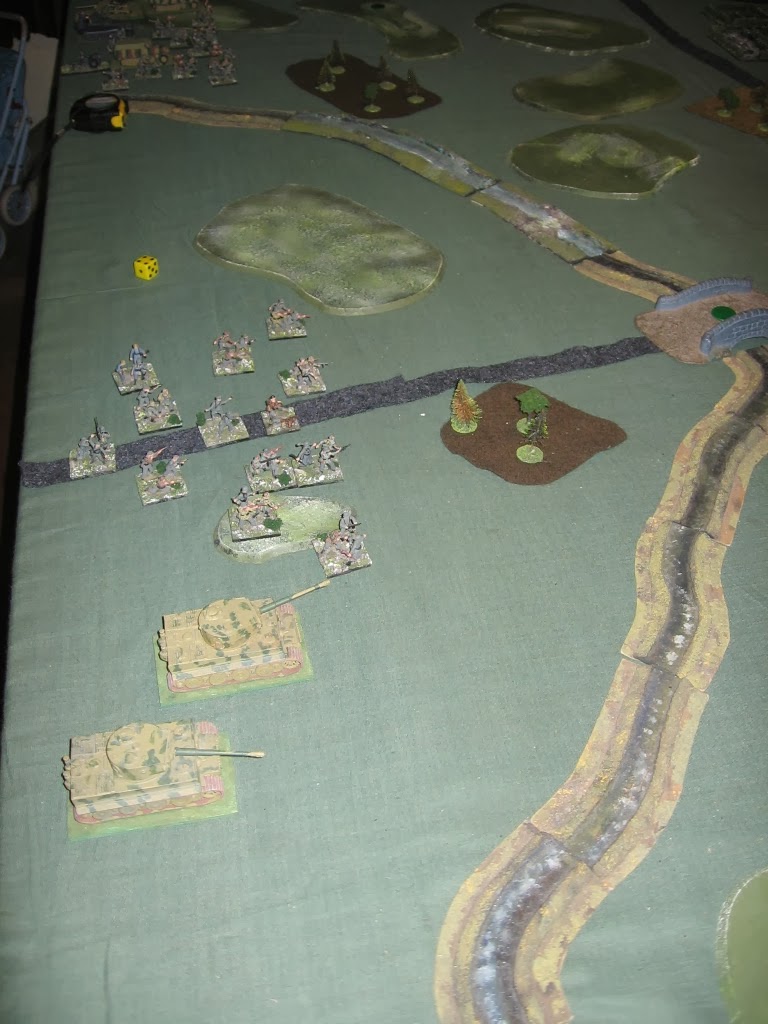 The KV1s were well supported by regimental 45mm AT platoons, and a regiment of artillery (deployed on table). 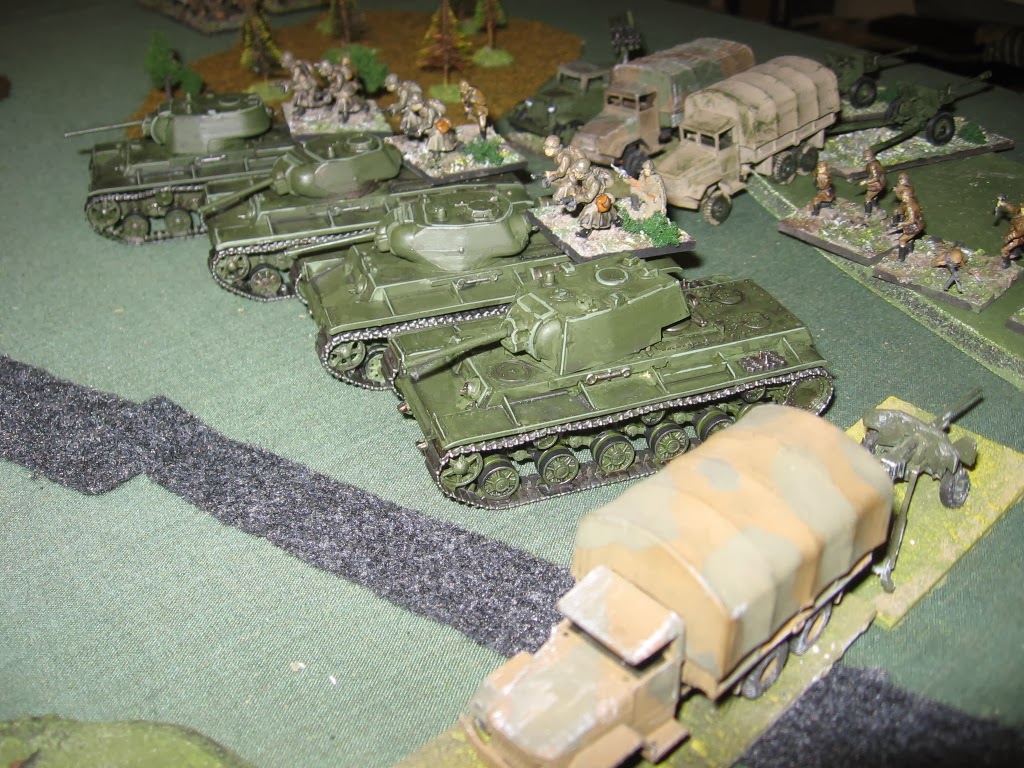 The battalion commander on the German left attempted to push his Pak 40s forward to support the infantry, but these were caught in the open and eliminated by the already deployed Russian 45mm AT platoons. 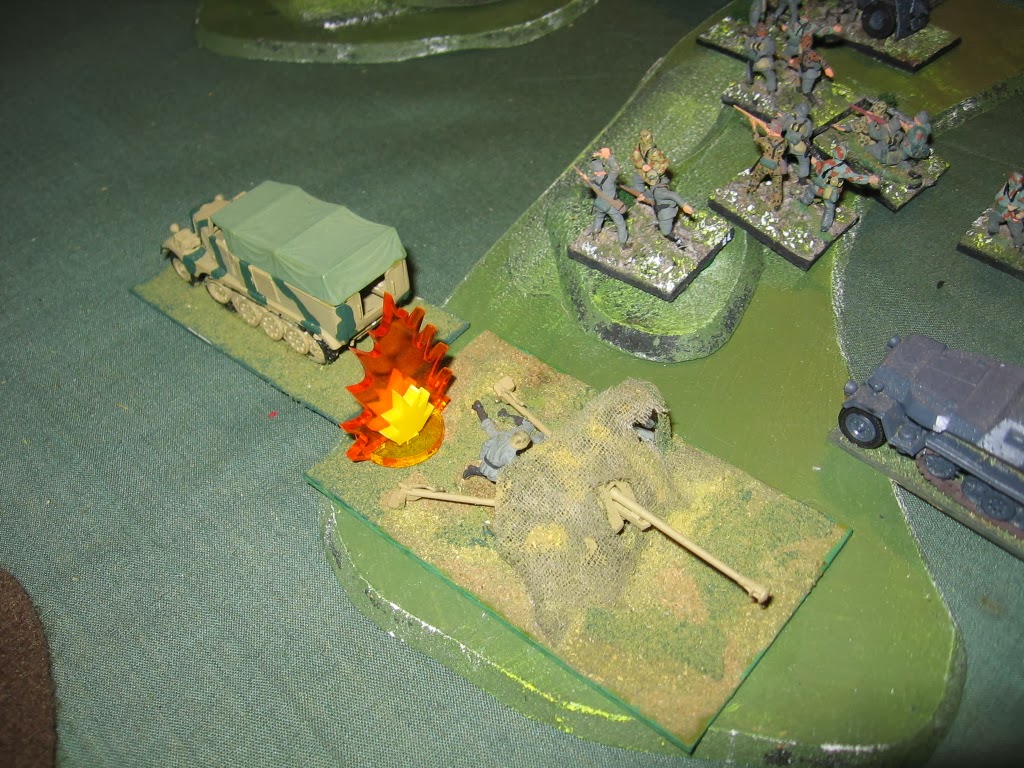 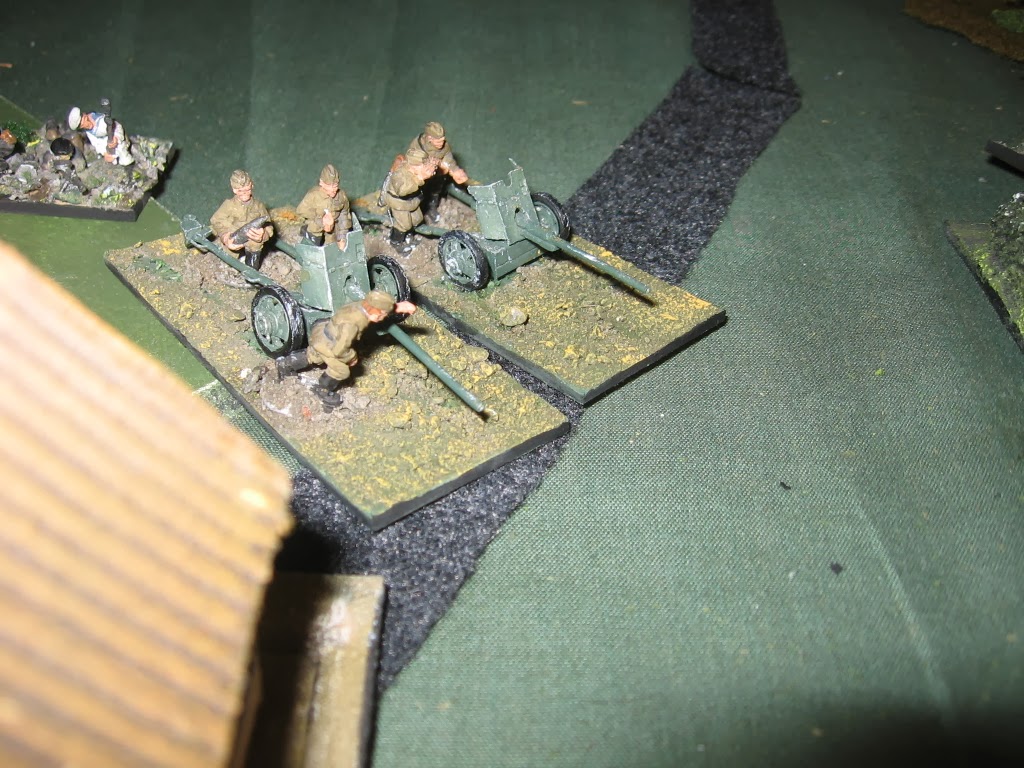 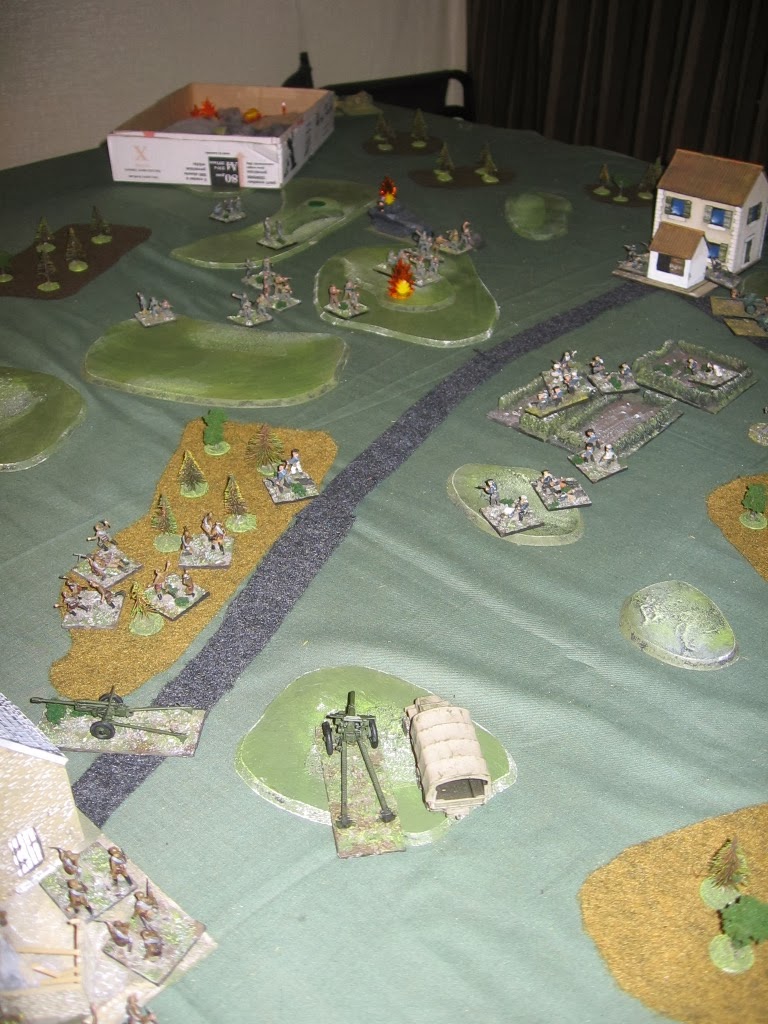 The German commander had ordered his third battalion to try to take the Russians in the flank, marching them around the Russian left. The flank march arrive don schedule and caught the Russian with only a a couple of platoons deployed as a flank guard. 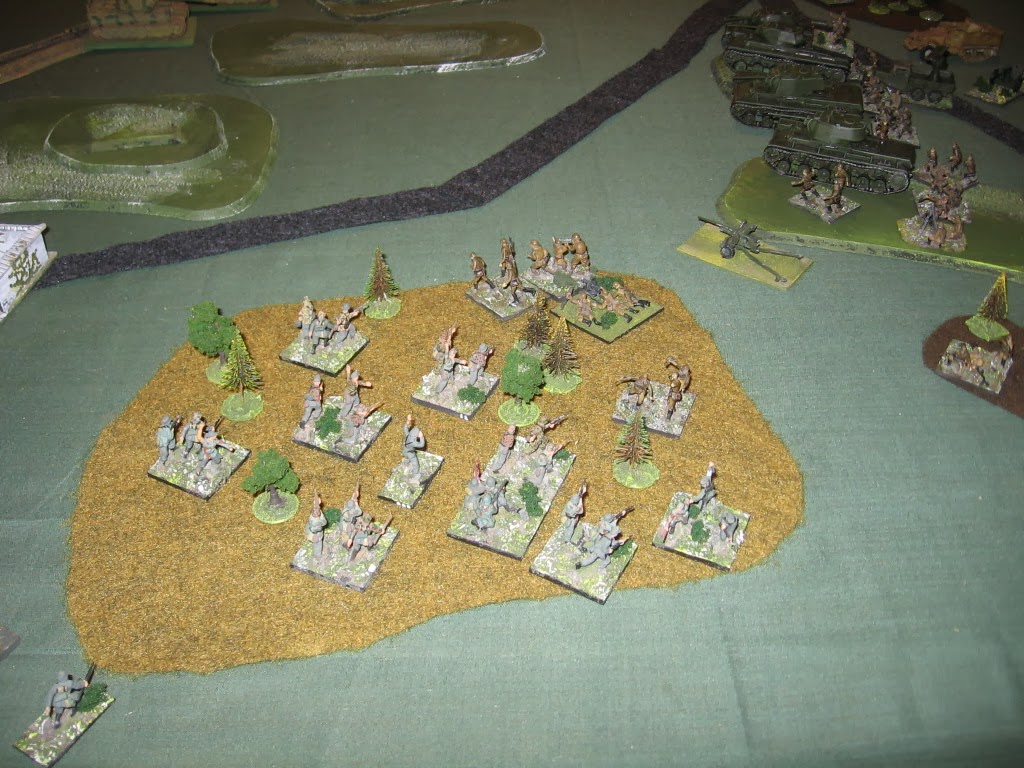 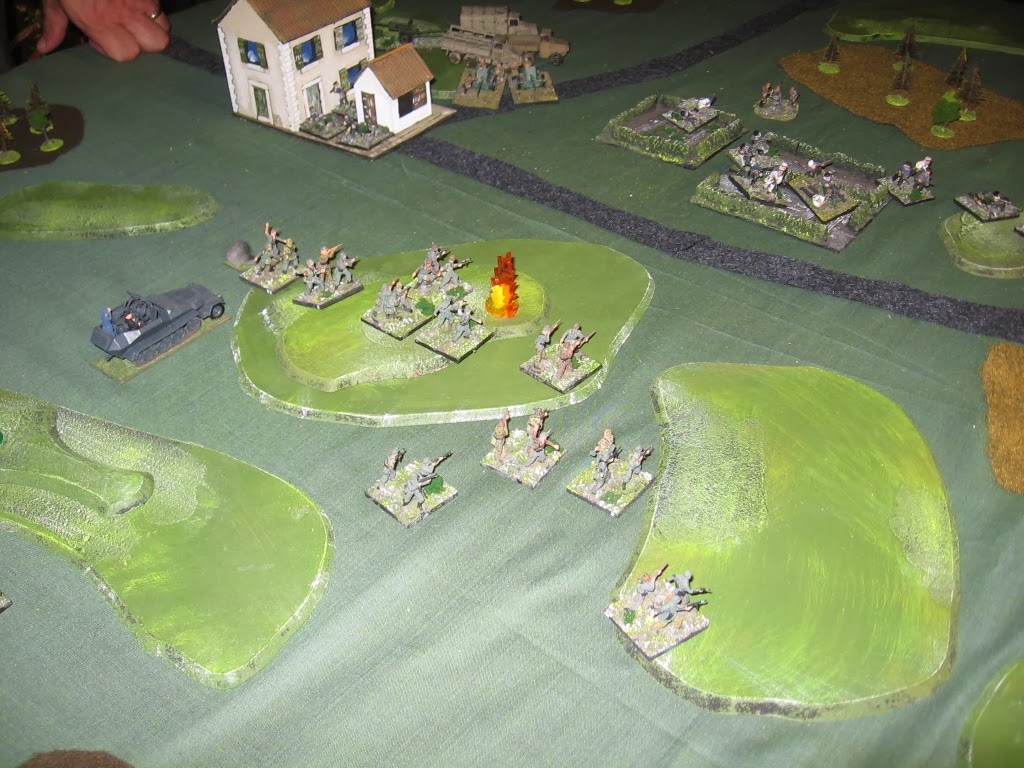 The German armour had to push forward but it was effectively ambushed by the previously unlocated Russian heavy tanks. 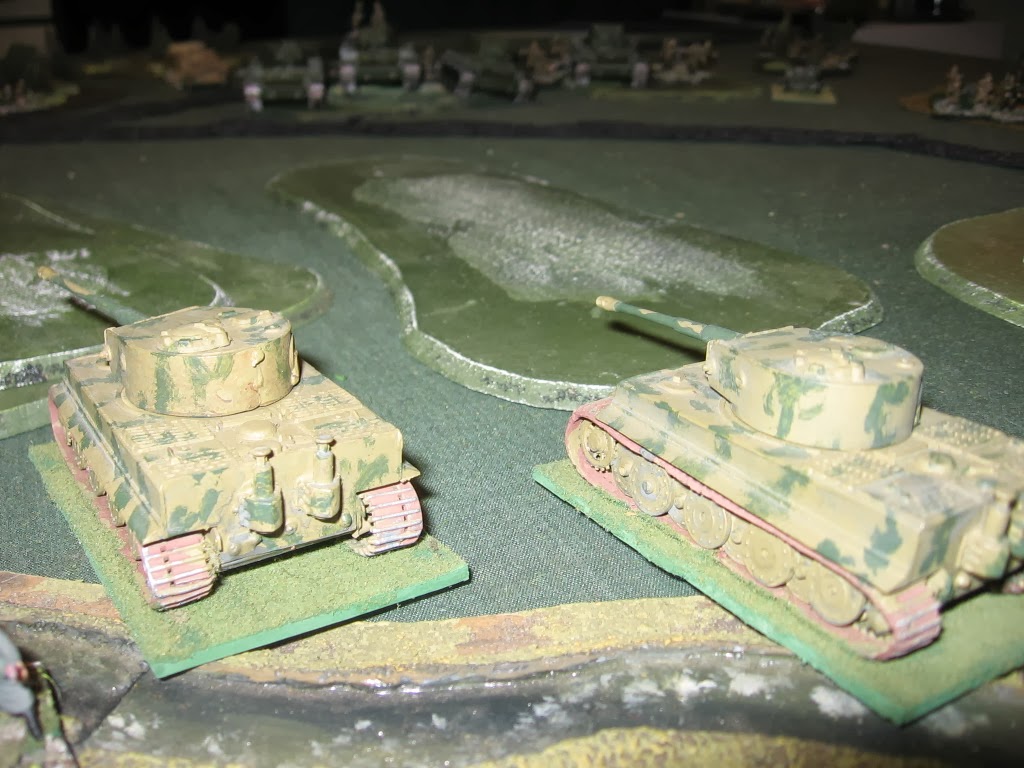 A combination of suppressive artillery fire and direct tank fire suppressed first one, then both platoons of Tigers in a great illustration of combined arms action. 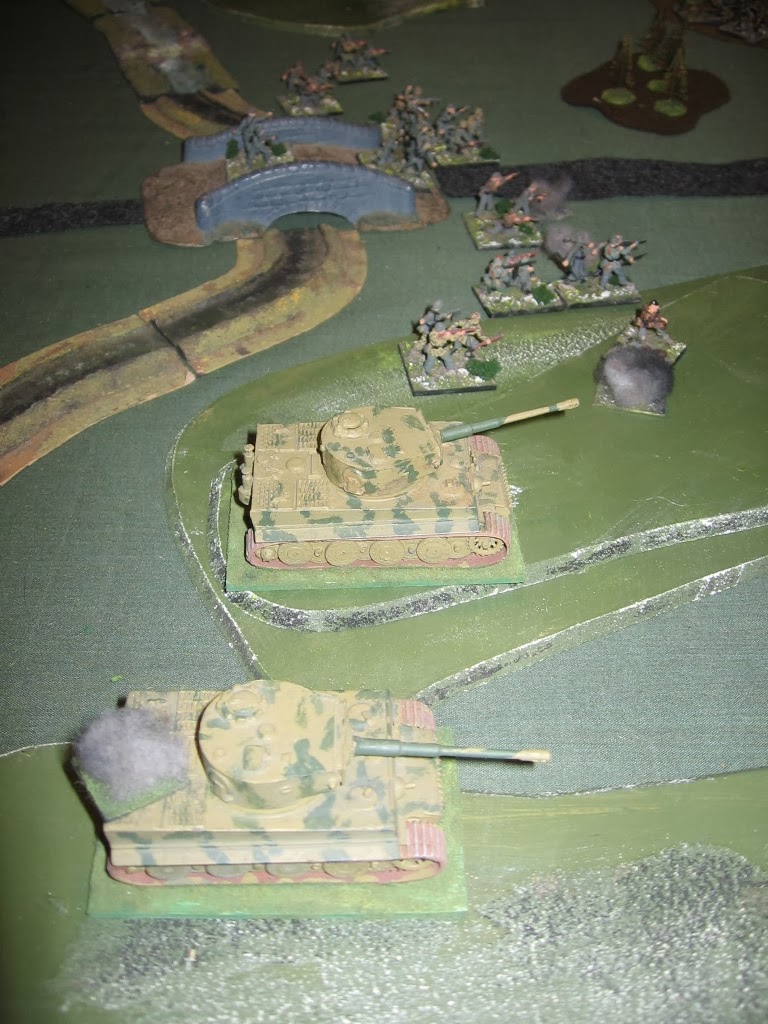 Meanwhile the German attempt to push forward in the centre was coming under increasing volumes of direct and mortar fire. 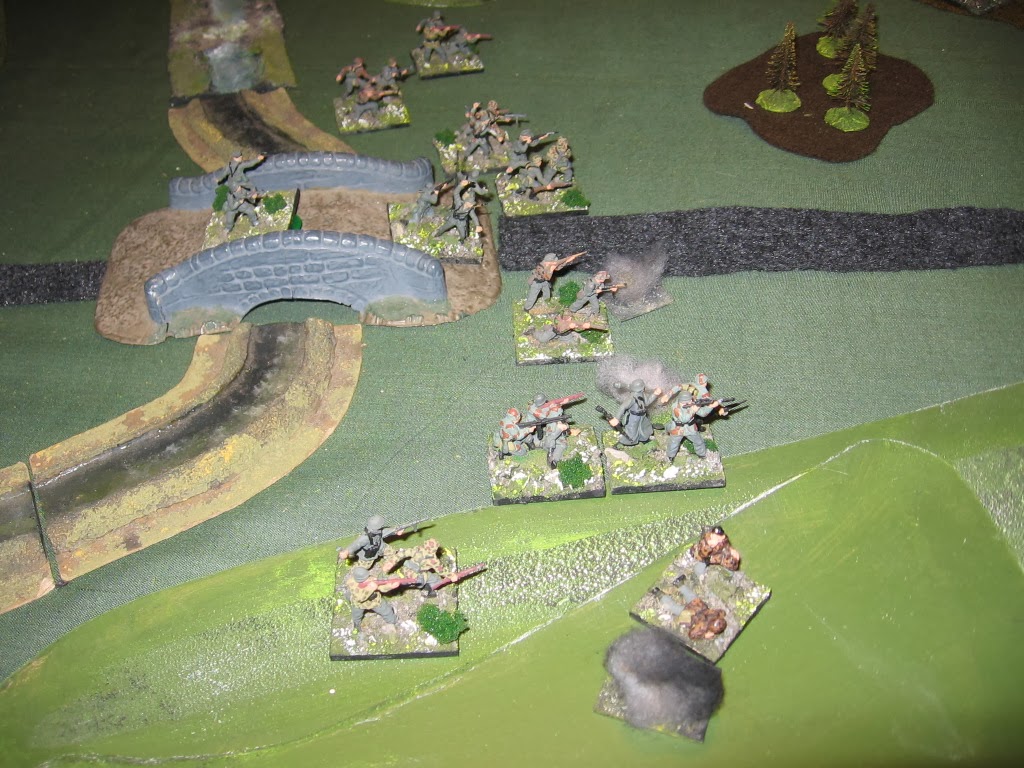 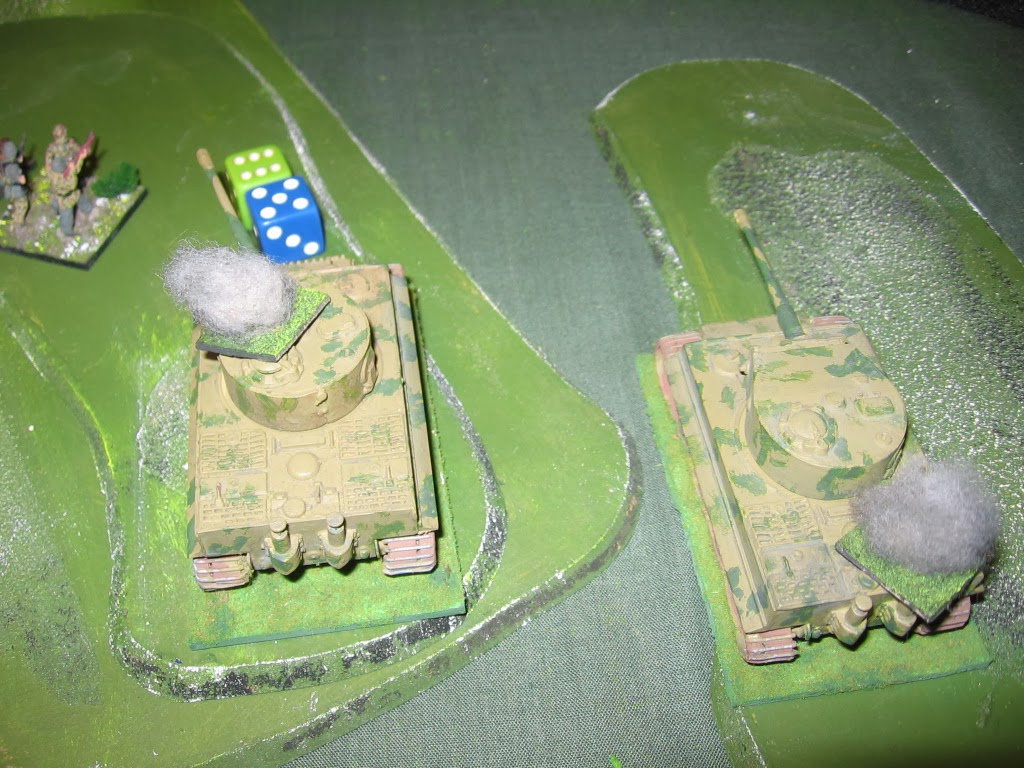 Finally both Tiger platoons were eliminated, and even though the German flank attack had made some progress it was obvious that the German force was buckling under the sustained Russian pressure. 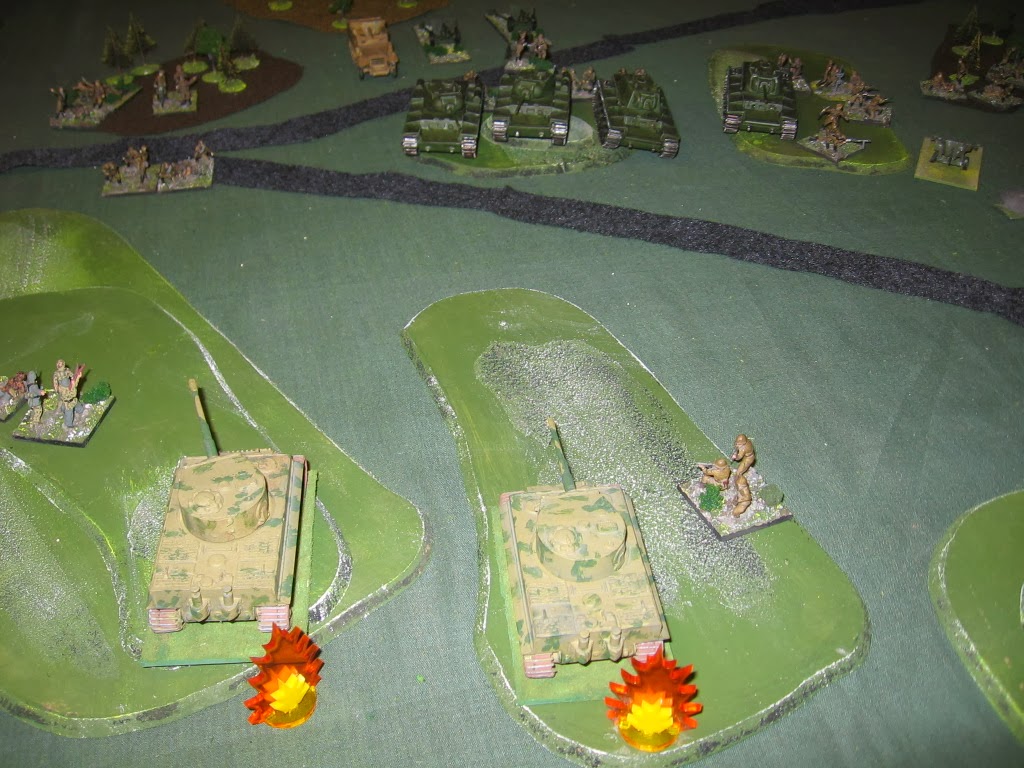 Both armies came from my own 20mm collection, and both lists (at 450 points) were my own. The Russian list was very effective, maximising indirect fire support for the infantry and armour. I generally take two on table Russian artillery regiments, given the difficulty of contact between Russian observers and their gun. My rationale is that if all else fails, they can always fire direct under the control of the gun crews, so the points are less likely to be wasted. This decision, combined with the mortar support, was crucial to supporting the infantry. Mind you, Andrew's die rolling was better than average, and Nick's was poor. In one turn Nick failed every roll to lift suppressions, heralding the death knell of the German armour.