"Righto Caruthers.. the ol' home morale a bit low, you know what? So.. we need a bit of bally morale boosting. Need a few runs on the board, old chap". Horse Guards had. away with a chap after a few years, even a Field Marshall. But fancy office or not, there was always room for a glass of port, even at 9 am in the morning, and the Field Marshall grabbed the decanter and sloshed a generous measure into each of two glasses.
"Indeed we do sir" and Major general Caruthers reached for the glass offered from the Feld Marshall's left hand.
"Cheers, old man"
"Cheers Sir" and a brief silence was accompanied with a few brief slurps, and the delicate forefinger brushing of moustaches.
"So,  Cabinet wants you to head out to the Indies, beat up a few pirates and beasts, capture an island or two.. as I say, runs on the board old man."
"Ah indeed sir, sounds like a spot of damned good fun is in order then."
"Yes yes, quite Caruthers. So head off as soon as you can, will you?. Me clerk Bannister has got a manifest for you.. you know how those bally supply chappies are .. troops, ships, food, that sort of thing. Bally clerk wallahs seem to be fixated with their bits of paper, but we have to humour them, eh wot?"
"Jolly good sir." and a little port dribbled from the corner of Caruthers' mouth.
"Oh and.. that nephew of yours, Winstanley.. take him along, there's a good chap."
"Ah excellent sir, I certainly shall." Glasses were emptied, a peremptory salute was offered and taken, and Caruthers walked from the room.


The beaches of the island of Guayabo, stronghold of the infamous pirate Sally Stein,  lay before the task force. Activity could already be seen on the shore, with what appeared to be a galleon airboat rising above the swaying palm trees. Caruthers had brought a part of his force ashore, but the royal air navy had yet to get its ships ready for action, so his forces would have to tackle the pirates assembling along the shore with no air support.

Incantations and rum were offered to the pirate Gods in the hope that they would favour Sally as they had so often in the past... 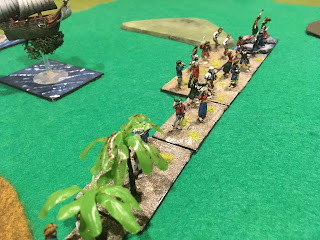 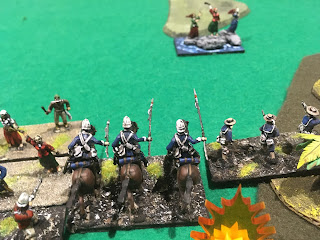 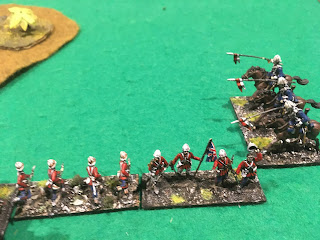 So ended the first battle in Major General Caruthers' adventures as he sets out to conquer the island of Guayabo. This was a 24 point HotT (Hordes of the Things) game played solo (my first solo HotT game, planned as a series of games which will document Caruthers' campaign of conquest.

Oh, and .. where was Winstanley? Well, officially covering the right flank... nudge nudge wink wink.  But let's just say a little cleaning of his trousers was in order. Perhaps next time eh old chap?

Watch for more action as Caruthers makes his way across Guayabo
at May 09, 2020 No comments: 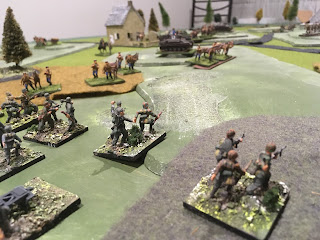 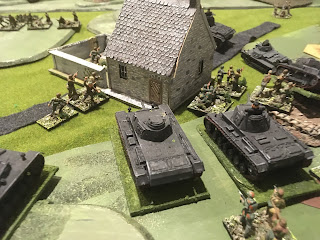 But at least some awesome 20mm figures and vehicle finally saw some action.. thanks Gerard!!!
at May 03, 2020 1 comment: