So I've finally finished my first HotT army: themed around the idea of "Lost Worlds", a little 'King Kong' ish in fact - dinosaurs, a large gorilla, and fearsome tribespeople. 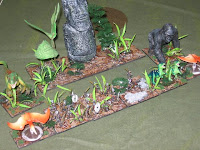 The army (this is a view of the whole army) is composed of:

and yes, that's 26 army points, so I can vary the composition a little. 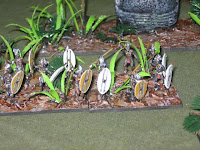 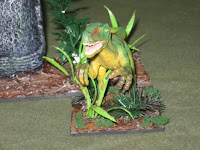 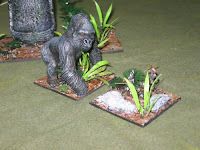 The God looking on at the magician general, a Shaman and acolyte, making a  human sacrifice in the 'sacred grove'.

On their first outing, the army managed a victory against a semi-historical mediaeval army (the behemoth sure took it to those knights). Of course the God managed to avoid turning up at all, so thank goodness the opposition Dragon had taken the advice of Actors Equity and decided to do the same.
Now for the generic chaos army .. what a fantastic dragon!!
at April 05, 2008 2 comments:

A month or two ago, as I suggested in an earlier post, I introduced boys at Christ's College to HotT (Hordes of the Things, the fantasy version  of WRG's DBA war games rules). I had only recently decided to get into these games myself, even though I bought my copy of the rules a couple of years ago.
I had set myself the challenge of creating armies with cheap plastic toys, as the fantasy supplement to the fantastic array of 20mm plastic figures now on the market.
I had thought that HotT would be a great rules system with which to engage young guys: the armies are small, and therefore  cheaper to collect than other systems, and also faster to paint.
The armies involve all sorts of fantasy creations: magicians and dragons, orcs and trolls.. they are all there. What's more there are no prescriptive army lists, just a very simple army composition rule to ensure game balance.
Finally the games are simple and quick to play (although they are of course anything but simple in complexity).
Wow!! Was I ever right? The rules system, and my incomplete examples of armies, have engaged a number of boys with an almost religious zeal. Armies have started to spring up, with some boys planning  second and third armies when they have still to complete their first (now, does that sound familiar???).
Three of the boys played their second and third games last Saturday. Here are some shots. Their armies are still largely unpainted (something I normally deplore, but to harness their enthusiasm, it was well worth while), but they are alredady learning many of those often quoted subtleties of the system. 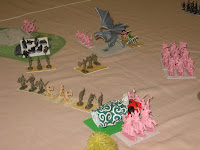 Dragons: a nice plastic winged dragon from our local $2 shop, and  a nice home-made Chinese dragon - a street parade dragon, complete with legs beneath the cloth. The two armies are fictional ancient Chinese, and semi-historical mediaeval. 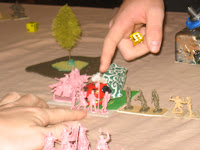 A dragon meets its nemisis. 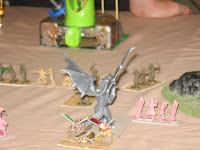 The neat home made stronghold in the background.
You have to forgive them the unpainted figures - they are just so enthusiastic!!
In the meantime, my own 'Lost Worlds' army is nearly complete. I'll post some photos in the next week or so.
at March 31, 2008 No comments: