I'm like a 'Pig in S--t" as my Mother used to say.. I received my copy of the second edition of Frank Chadwick's "Volley and Bayonet: Road to Glory" rules. I have played with the play-test version of these for a number of years now, and they quickly became my all time favourite rules set (and that after 40 years of gaming, and I don't know how many rules sets).

The rules set allows gaming from 1700 to 1900, (with minor rules variations for each sub period) and plays so elegantly and subtly... they have given me viable 'gaming access to many sub periods of this era that I had longed to play for most of my gaming career. The rules I had previously found were (for me) always cumbersome, awkward or.. well, they just never suited me. Now that's not an atack on the other rules sets, they just never suited me: Volley and bayonet does.

There are some subtle yet significant changes in the second edition, but unlike some other rules systems, we have not seen a wholesale re-write of the system. The rules have a comforting familiarity that leaves me feeling secure after 9 years of using the earlier edition. As a 'gamer I like that.

The rules come with a scenario generation system that looks rather cool.. i might write more once I've actually used them.

In the meantime, I'm looking forward to a lot of Napoleonic games (my 25mm French, Spanish and British need some exercise)... more Volley and Bayonet goodness...
at September 27, 2008 No comments:

Email ThisBlogThis!Share to TwitterShare to FacebookShare to Pinterest
Labels: Horse and Musket, Volley and Bayonet

I'm on a bit of a DBA/HotT kick at the moment. Just in case there are blog readers who haven't seen Fanaticus, by way of a teaser (with no intention to contravene copyright!!):

And you can find the rest here..

In the meantime, back to revamping those 25mm Early Imperial Romans for DBA. They match up reasonably with the 20mm Early Germans (if you squint a little).. photos to come in the near future.

I've had a bunch of 20mm Esci Barbarians sitting in a box for probably close to 20 years. They were painted in my days of block painting - so no shading or highlighting, well ... nothing really, just block colours. I thought it was time to get these guys out and give them a spruce up ready for some Book II DBA gaming. I simply gave them a 'Dark Flesh' wash, followed by a dry brush highlight with a light flesh, and then put them on new bases and ... voila!!!
The first photo shows the army complete.. 10 Wb, a Wb general, and a Psiloi. The other photos are just .. well, more warband basically, because that's all there is.
Of course the army will easily morph into a HotT Barbarian army as well... a few beasts, a Magician/Shaman and.. well, we'll see. 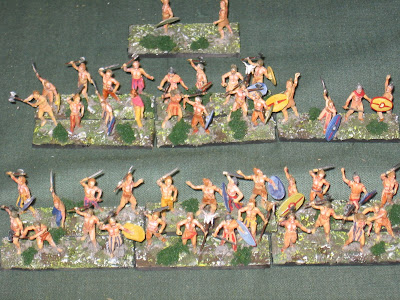 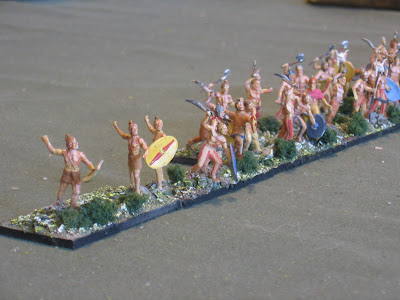 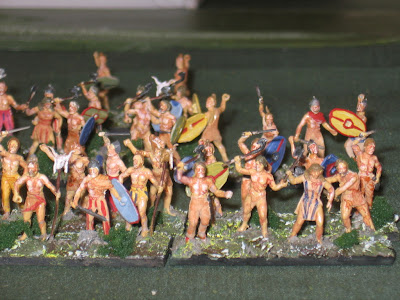 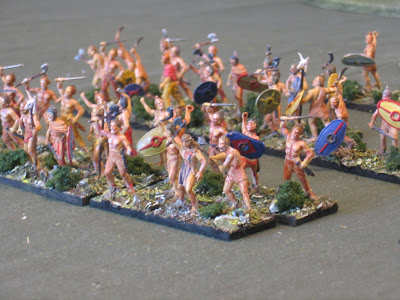 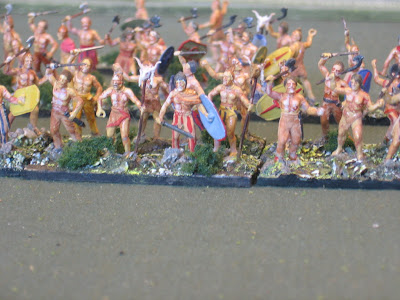 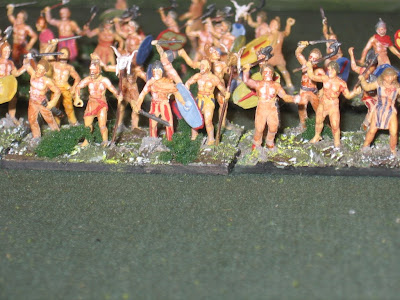