Stage 1 of my plan to rekindle the painting ethos, to get those 'painting juices' flowing again. I have finished the basing of the Cadians that I bought earlier this year. I bought them already painted from an up and coming 'gamer, enthusiast and all round nice guy who had moved on from Cadians to Vostroyans. He wasn't happy with the paint job he'd done on these but I thought they were just fine. They have already apeared in a game some months ago (with bases unpainted), and I saw these as an easy or early win in the drive to get some painting success under my belt again, and re-energise my painting plan (which, as with almost all 'gamers, has more lead than an Americas' Cup yacht keel - well, in the mono-hull days anyway!!).

So, meet the Cadian 198th, 'No job too dirty' (hence the ash waste style basing which is something of a departure for me). 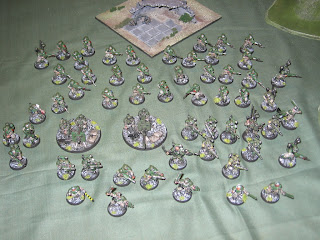 And some close up views. 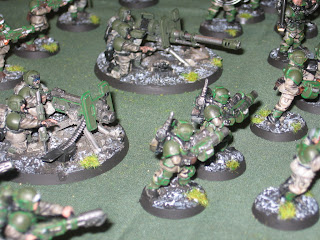 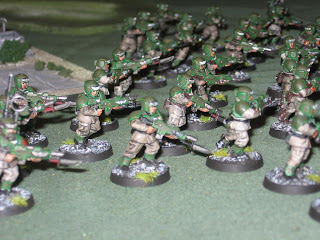 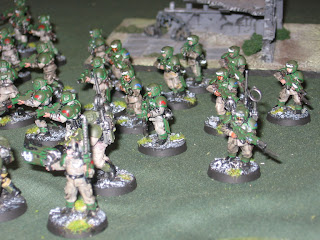 Now to paint a few more Heavy weapons, some troopers and a couple of special weapons (that all came with the original purchase). The big challege will be to use a similar painting style. Elliot used washes whereas I woud usually use layers, so I'll have to learn a few things here. Hopefully some photos in a few weeks time.
at November 20, 2010 1 comment:

Couldn't really let today pass without acknowledging that it's the anniversary of the Battle of Cambrai, 20 November 1917.

As an ex Black Hatter myself I always feel some degree of affinity with the day, although I don't know that I quite agree with the the view that it demonstrated that the tank was the secret weapon that would end the war. I've always thought that it was in fact the evolution of artillery tactics in particular, along with a huge number of lessons learned in so many other areas on how to conduct warfare (from secrecy, to infantry tactics, to simple exhaustion on the home and military fronts) that lay behind the breaking of the stalemate.

Food for thought anyway as we remember the role that the tank did play, especially on this day in 1917.
at November 20, 2010 No comments:

Jon and Keith last night introduced me to Wings of War (the rules set is available as a free download from this site, but you need the cards that come with the game to play). I'd bought an Albatross DVa quite some time ago to use in Great War Spearhead games, but hadn't played the WoW game itself. Here are a couple of write-ups from Keith's blog, the first of last night's game, and another of earlier games.

Here are a few shots of the game. My first game went well until I was hit by Jon with his Spad XIII.. and unceremomiously blew up!!! My DVa is the plane nearest the camera ... 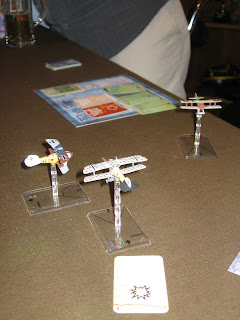 Jon's DH4 successfully making a bombing run in one of our games. 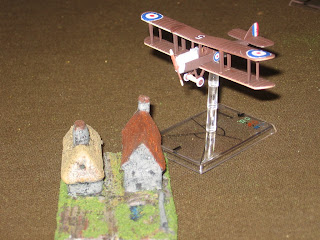 Keith's Dr1 Fokker  Triplane.. these things turn 'on a dime' as they say!!! 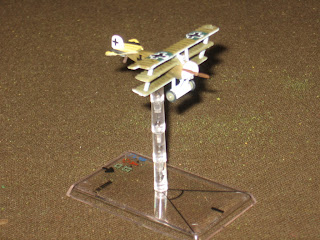 The two albatrosses (albatrii???) scrabble to get to grips with DH4 .. Jon flew straight and totally confounded us.. a source of a lot of laughter and a thoroughly good fun game!!!! 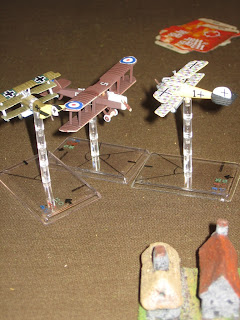 It's been a while since I painted anything really. I competed a couple of stands of GW Fell Bats as flyers for Lorraine's Evil HotT army, but that was pre sabbatical trip, and pre Earthquake (4 September). Having been back from the trip for 6 weeks I haven't actually picked up a paint brush yet. So, what was the best way to get back into the swing? Either a brand new project (sounded good) or finishing some existing projects. I opted for the latter, which still left an awful lot of possibilities. Just because they are there, I've decided to try to bring the 40K Imperial Guard/Daemonhunter allies a little closer to completion to get the juices flowing. These are figures I'd bought painted, but not based, several months ago, and it sounded easy finish the bases. This is one of those psychological 'quick reward for minimum effort' projects, specially chosen so that I can see the results of my labours quickly enough to get some momentum going.

Here are a couple of photos of the figures with no basing. 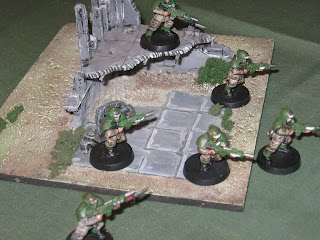 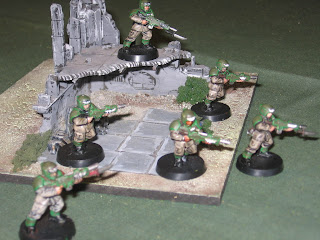 And here are a few photos of the first batch finished so far. I've opted for a wasteland basing style for this army, looking very dark and desolate. 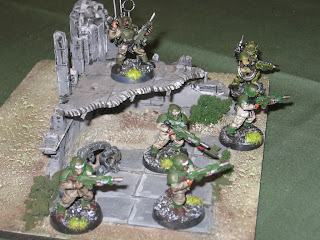 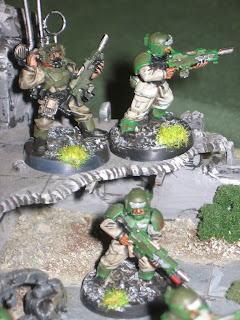 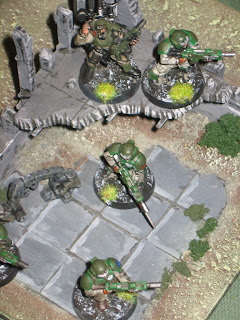 I've quite a few more to base, and a number of figures (including some heavy weapons) to paint from scratch, so they have been undercoated ready to go too. I'll have to buy a few more heavy weapons, and I quite fancy adding some sentinels (walkers) and another couple of vehicles so the force can play as a stand alone IG army as well as an ally to the Daemonhunters. All looks relatively achievable at this stage. Only flaw in all this: I don't play a lot of 40K at the moment. However the miniatures are always very cool to paint. Might be what I need in preparation for the next DBA army, and that Pirate HotT army.
at November 14, 2010 2 comments: