I love the Spearhead rules set. And I love 20mm wargaming kit. So, when the chance comes around to combine the two, who am I to say no, even though SH is much better suited to smaller scale kit?
Andy has been thinking about how to use a small but growing WW2 Italian force that he originally started painting for Crossfire. Well, yep we could play Crossfire, which we both love. However Spearhead seems like a great alternative too.

When we play SH in 20mm, we use a 1.5x scale multiplier to movement and ranges to try to keep the vehicles a little more in scale.

And so here we were last night, with my two 20mm 1940 armies set for an encounter. I looked at Scenario Generation System points, but also wanted to keep the forces smaller, as the objective was to acquaint Andy with the WW2 Spearhead variant, to see if I could whet his appetite. So while two forces without artillery of any kind is much like the colosseum without the lions, it would suffice to get Andy used to manoeuvring on the table with three manoeuvre units. I did have a pleasant wee surprise for him, of which more later. 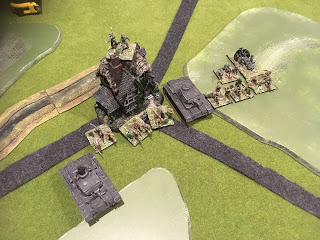 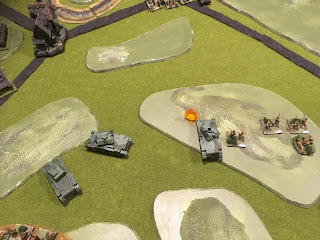 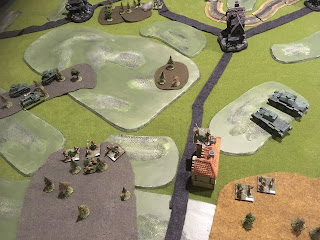 The position is lost for the British and a general withdrawal is the only option.

As an introductory game, this was a cracking exercise. The absence of artillery was noticeable for me as a more experienced player. In our next game we'll make sure that artillery, for both support and counter battery, is present. Even without the supporting artillery, the game was another great example of the need to plan, to allocate assets, and then to tactically manoeuvre forces on the table top.  That said, one of the things I love about SH is the 'layering' of weapons systems. That will be even more apparent for Andy in our next game.

I failed to use the capacity of the British armour to count as supporting stands (the main reason for taking the Independent Tank Brigade). However the initial armoured action developed well in advance of the infantry action.