The Undead... the latest HotT army...

So I have finally found the time to take a few photos of the newest HotT army: Undead. The army as you see it is slightly more than 24 AP, and consists of a hero general, behemoth, two necromancers (wizards), three Hordes, a shooter, two blades (Grim Reapers) and a lurker. Actually you could use the lurker as a sneaker if you preferred - a delightful female vampire.. should that be a vampiress? a vampirella?.. hmmmm 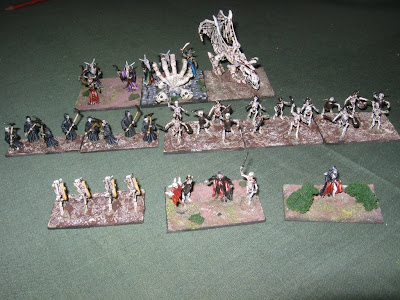 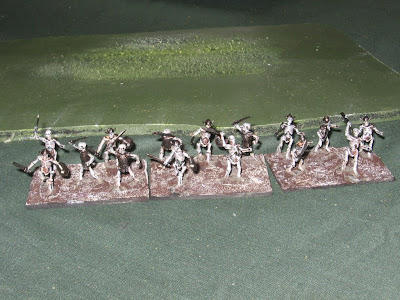 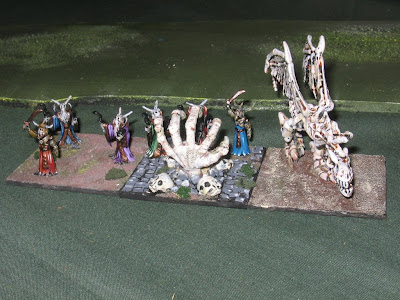 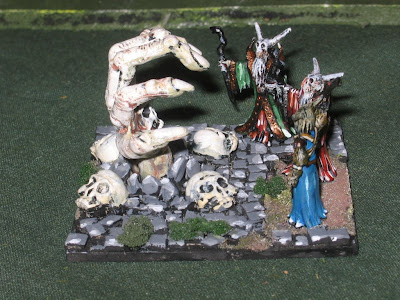 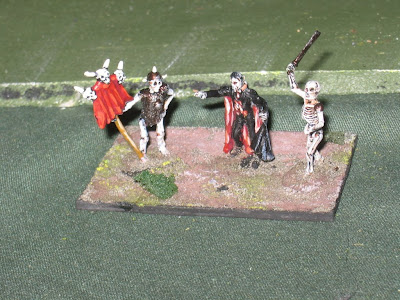 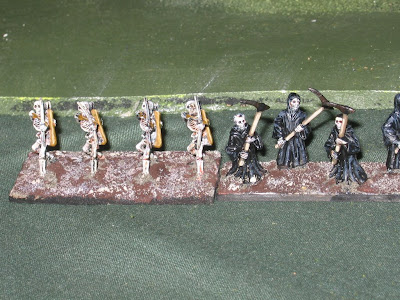 I especially like the Wizards raising the bone giant from beneath the ground. The figures all come from the Caesar Undead box (just one box). The behemoth (a bone dragon) and the skeleton hand, each came from a game set available at the New Zealand $2 shops, so cost $2 each. The whole army cosr $18... pretty good value I thought. Just a Stronghold to make - some tombstones might be in order here.

Now, I recently saw, and bought, some packets of very cheap little spiders - I immediately saw hordes bases (very small spiders) and a couple of heroes.. two larger spiders that I bought from a 'Nature's Discoveries' shop... a spider army, a wee way to go, but.. creepy, eh!! Keep watching for some photos

Reading Richard Overy's book "Why the allies won", I was fascinated with his analysis of some of the economic issues behind the war. Strangely to some, questions of relative efficiency of resource use are quite fascinating to me.

A teaching colleague by coincidence popped his head around my study door late in the term to ask about some aspects of the economy of Nazi Germany after one of his senior classes had engaged in quite vigourous debate of some of these issues. We did a quick Google search for some information on the nazi economy and I found this fascinating paper "Against the mainstream: Nazi privatization in 1930s Germany" written by Germa Bel.
By the 1930s public ownership of business had become quite widespread amongst western nations as a government repsonse to the Great Depression. However wihtin the first four years of its rule the nazi government had reversed much of this privatisation, well in advance of similar moves by other western governments.

Many scholars have pointed out that the Great Depression spurred State ownership in Western capitalist countries (e.g. Aharoni, 1986, pp. 72 and ff.; Clifton, Comín and Díaz Fuentes, 2003, p. 16; Megginson, 2005, pp. 9-10), and Germany was no exception. But Germany was alone in developing a policy of privatization in the 1930s. Therefore a central question remains: Why did the Nazi regime depart from the mainstream policies regarding State ownership of firms? Why did Germany’s government transfer firms and public functions to the private sector while the other Western countries did not?

Perhaps the most obvious rationale for this re-privatisation programme was the creation of fiscal revenue for the government.

Estimates presented in table 1 show that between the fiscal years 1934/35 and 1937/38 privatization was an important source of revenue for Germany’s Treasury. In the period as a whole, privatization proceeds represented almost 1.4 per cent of total fiscal revenues.

Actual figures are hard to come by as after 1935 the nazi government stopped publishing detailed financial information.

While the author acknowledges the importance of revenue from privatisation as  a proportion of total fiscal revenue, making comparisons with the 1990s privatisations in the EU (a necessary comparison since there was little that was comparable in the 1930s and 40s), he also notes that this was done against a background of increasing state control of the economy in nazi Germany, while the EU experiences of the 1990s took place against a background of increasing liberalisation and reduction in government control.
This doesn't however fully explain the story, for it is one riddles with political expediency, as Hitler's nazi party sought to grant favours in exchange for political support. Indeed, it is my reading that cronyism is the most significant explanation for this privatisation, as the nazi party's philosophy was not one that actually supported private ownership, The compromise was to allow private ownership and control at the micro level, while maintaining strong market control.
It is worth quoting the author's conclusions in full:

Although modern economic literature usually ignores the fact, the Nazi government in 1930s Germany undertook a wide scale privatization policy. The government sold public ownership in several State-owned firms in different sectors. In addition, delivery of some public services previously produced by the public sector was transferred to the private sector, mainly to organizations within the Nazi Party.
Ideological motivations do not explain Nazi privatization. However, political motivations were important. The Nazi government may have used privatization as a tool to improve its relationship with big industrialists and to increase support among this group for its policies. Privatization was also likely used to foster more widespread political support for the party.

Finally, financial motivations played a central role in Nazi privatization. The proceeds from privatization in 1934-37 had relevant fiscal significance: No less than 1.37 per cent of total fiscal revenues were obtained from selling shares in public firms. Moreover, the government avoided including a huge expenditure in the budget by using outside-of-the-budget tools to finance the public services franchised to Nazi organizations."

So how does this all link with Overy's book? It is my contention, with little or no other evidence, that this cronyism created the very inefficiencies that Overy refers to.
This has, interestingly, fitted in very well with some junior economics I have been teaching this year in which we have been investigating the market as a tool for resource allocation. We see in the case of nazi Germany an example of corruption usurping the power of the market, resulting in poor resource allocation.
Others' thoughts would be welcome if there's anyone out there reading this. Of course as usual I could just be talking to myself, but I really am interested in this stuff about Economics and world war 2.
at July 09, 2008 1 comment: