Friday night... games night, and 'By Gad Suh'.. the British are out in force tonight. Nick G and I played a very cool HotT game pitting Nick's British VSF against the Undead.

Most of the army was created by our good friend Andy Gorman, and the steam tank was on its inaugural outing after Nick finished it last week.

(This was one point short, as originally the army included a sneaker, but we had a problem resolving an one aspect of use of sneakers I'll have to ask on the Yahoo HotT list) so we reclassified it as a Blade .. expediency.. and that's just fine).

Nick deployed with his aerials on his left, and advanced these towards the Undead, slowly bringing up the behemoth and Hero in support. His shooters remained behind on the hill awaiting events. 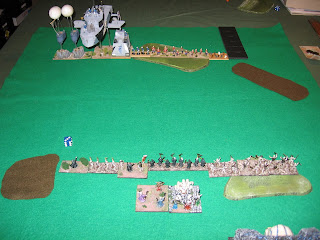 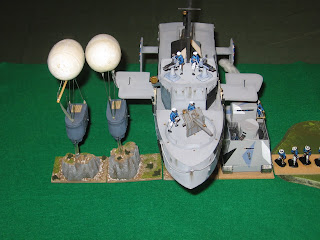 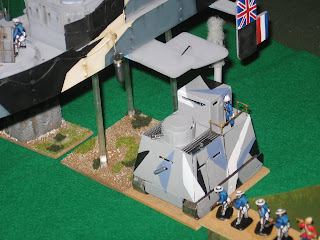 Undead magic crackled through the air pushing the airboat backwards. 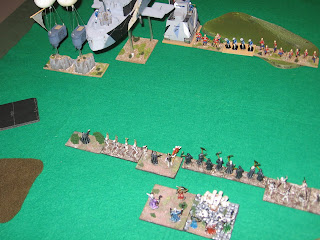 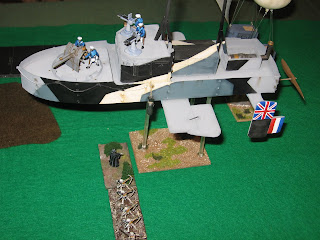 Nick attacked the Blade on the left flank of the Undead army with the air boat and one flyer. 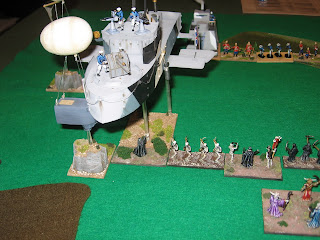 The first combat was drawn, and the airboat remained locked in combat, so the Undead shooters flanked the airboat. Meanwhile Nick advanced his second flyer into the Undead rear. But the Undead hero used his longer movement distance to attack the flyer... one dead flyer.. ouch!!!!! 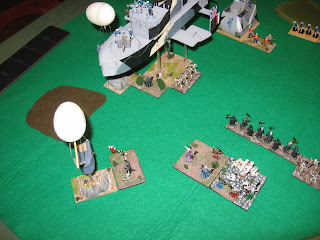 A 6 to 3, and the airboat was dead.. I think Nick was feeling as if this was going to be one of those nights. 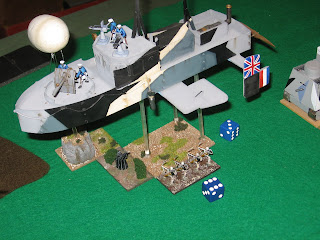 The British hero advanced forward with the Steam tank in support, making short work of the shooter base!! 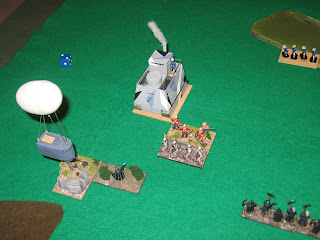 Again bolts of magic energy raced through the air, and the british hero disappeared in a puff of smoke, ensorcelled. This was a damned un-british way to fight a war!!! Finally the Undead hero attacked the second British flyer, bringing the balloon down in a raging inferno, and the game was over. 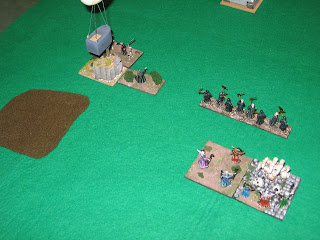 Another fine evening spent with good company, reasonable coffee, and lots of good conversation, hence only one HotT game played, but after all what do we follow this hobby for? Hmm.. best not answer that too quickly..
at April 09, 2010 3 comments:

Well I've finally written up the photo after action report of the 1914 Great War Spearhead game Nick and I played waaaayyyy back in January..

Titled 'Backs against the wall', the completed report is here. If you are interested, go to the After Action Reports section.

This was exciting stuff.. hopefully the AAR reflects at least some of the 'gaming tension we both felt as we battled it out. I felt that Nick actually deserved to win this none: he planned his attacks well, supported them in the right places at the right times with his artillery assets, was prepared to take casualties to achieve his aims, and committed reserves in a very timely manner, keeping his foot on my throat all the time. I was very lucky to squeak a minor victory from the game.. I suspect it was more of a draw to tell the truth.

However it illustrates one of the things that keeps me in the hobby ... genuinely exciting nail biting games filled with positive tension and great fun!!
at April 07, 2010 No comments:

A couple of weeks ago I blogged on the fantastic model galleon that my Father had built (the Golden Hind). Here are a few more of my Father's models, all constructed from plans that came with his magazine subscription 'Hobbies Weekly'.

The first is a lighthouse table lamp stand. The bulb sits in the top (exactly where you'd expect the light to be in a light house I guess). The ocean waves were formed using modeling putty, then hand painted. 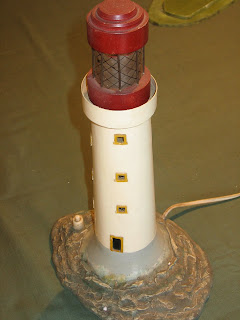 This next model is of a small church. 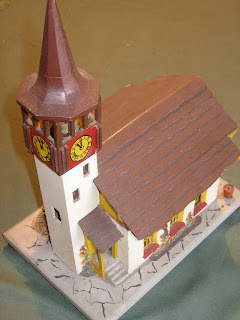 The roof lifted up to reveal a spray on velvet coated box for storing trinkets of various kinds, the opening of which would start a music box hidden beneath the box. This was very much a 'style of the day'. I recall as a child being enthralled by the plastic bottle 'puffer' used to apply the fine velvet over a surface of wet glue. Fascinating what captures our imaginations and cements into our memory from our childhood. 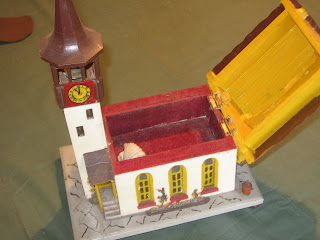 The detailing was interesting, the stained glass windows were hand painted on heavy 'cellophane', while the climbing plants were shaped using modeling putty (it was called DAP as I recall), and then painted. 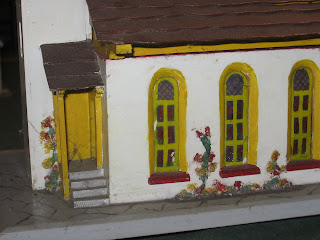 Finally is this 'Swiss Chalet', again a music box activated when the roof is lifted back. The music boxes are clockwork mechanical movements, wound up to play. 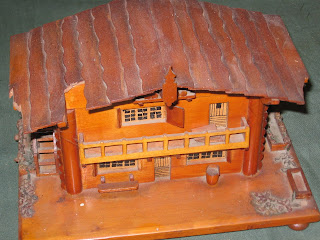 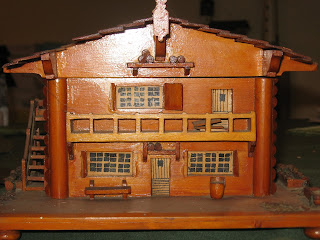 I've just finished reading 'Fusiliers' by Mark Urban (Faber and faber, 2007). Subtitled 'How the British army lost America but learned how to fight', this is an account of the American War of Independence written from many previously unpublished primary sources, focussed mainly (but not exclusively) on the 23rd Royal Welch Fusiliers. 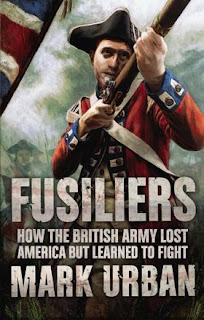 Urban manages to write a well paced and engaging piece of history, developing within it the story of the revolution in British tactics that developed on the North American continent, and the subsequent battle to have these adopted by the British Army in the early days of the French revolutionary wars.

His chronicling of Cornwallis' campaign through the southern states, and his accounts of the battles in which the protagonists engaged (Camden and Guildford Courthouse stand out), are engaging and memorable.

Most profound for me is his account in his last two chapters of the regression of British tactics in the 1890s  (as the Duke of York pushed the emulation of the Prussian linear tactics that he saw on show at the 1785 Prussian maneuvers) and the work of Calvert and Cornwallis to re-introduce the 'light infantry' tactics that Cornwallis had developed with the British Army in North America 25 years before, with line infantry fighting in 2 ranks, with larger spaces between files, and dedicated light infantry.

The book is compelling reading, and ought to be on the reading list of any 'gamer (or scholar for that matter) with an interest in 18th and 19th century warfare.