It was a last minute affair (other commitments have kept me from the games table for a few weeks, but a small window of opportunity had arisen to squeak in a game this Saturday evening) and it was to have been a Volley and Bayonet Marlburian game. However after a good long yarn and a whiskey or two, we suddenly found too little time left in the evening for the Marlburian affair, so we settled for  a short HotT game. It was a chance to give the new Soviet HotT army a try, and we chose to oppose them with the VSF army under Carruthers' able command, fielding the two new fangled fliers that had just arrived from the Admiralty.

The Soviet army consisted of:

Carruthers sent his fliers around his right flank to attack the enemy left and hold it up, while trying to manoeuvre his unwieldy line forward. 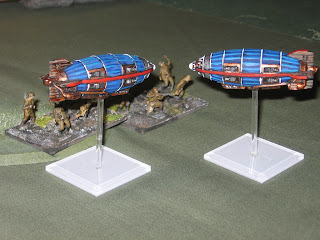 The Soviets advanced hurriedly on their own right and a fight began for the wooded ground that was anchoring the British left. 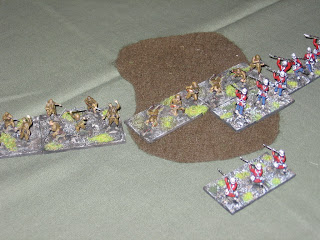 The Soviet behemoths advanced towards the British centre, but one was blown away by the British artillery (a 1 vs a 6 will do that..). 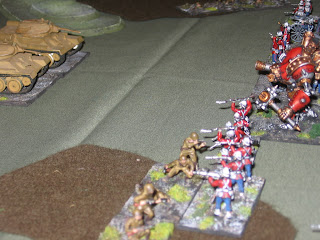 While the battles for the wings continued, the lone Soviet behemoth decided to have a go itself in support of the Soviet sub machine gunners who were attacked the British right. Throughout this mid phase of the game the British fliers were marooned away from the action as I threw 4 x 1s and a 2 out of 5 consecutive PIP die rolls.. mutter mutter.. Carruthers wasn't happy. 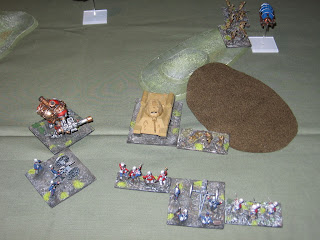 The Soviets finally came forward with the behemoth supported by the sole remaining sub machine gun unit on its right. The British artillery should have been a goner but.. another 1 vs 6 .. 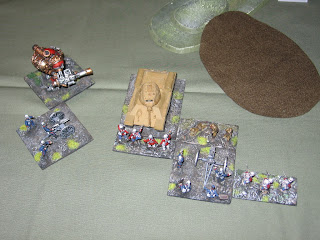 The Soviets were successfully maintaining the pressure on their own right, but casualties were mounting, and successive desperate Soviet calls to the artillery Gods had gone unanswered. 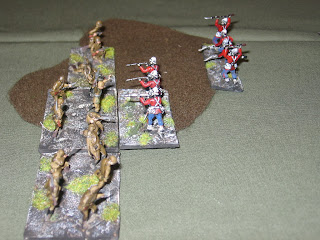 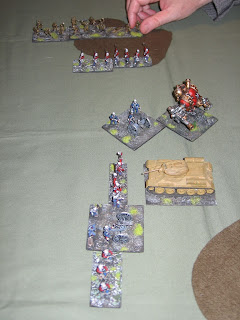 Finally the Gods responded, just as the British steam robot clanked and hissed into action and attacked the last remaining Soviet behemoth, supported by one of the British fliers. 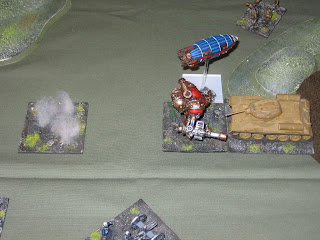 The first attack failed, but the second went in supported by the second flier and the last of the Soviet spirit was extinguished. 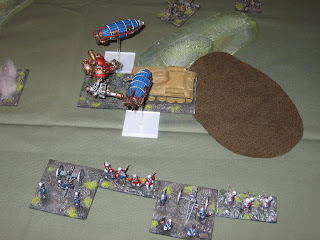 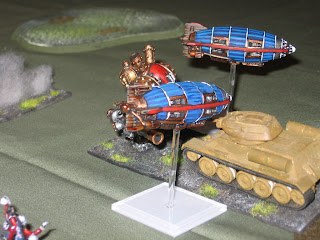 Maybe these new fangled flying machines aren't so bad after all.
at October 08, 2011 4 comments: