Big axes and attitude to match

Yup.. it's happened again.. It's no secret that I've pondered WH Fantasy for a while.. and even bought those mostly painted Tomb Kings figures as a start, only to convert them to HotT with a new base job.

However discussion on our local war games forum of how 'boring' dwarf armies to play with and against perked my interest.. how could short guys with big axes, and an attitude to match, be boring?

So.. I've bought the 'battalion box', and started my first Dwarf regiment. 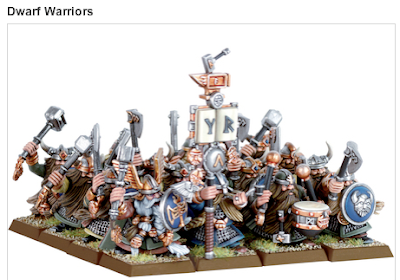 No this isn't them... this is the GW promotion photo from their own web site. Hopefully I'll post a few photos in a week or two. I had hoped to 'speed paint' them, but life has intervened with other priorities, and also i just can't bring myself to use dips. I am still a layering man.. I still like the old fashioned layers and highlights.

I played a small trial game a couple of weeks ago, and was pleasantly surprised at the 'layers' of play possible with move, magic, fire, and close combat, each adding a fascinating series of layers to what I'd thought to be a simplistic game. Now that's not to say think this game is the best thing sliced bread (I know better!!), but at its own low level it did remnd me of what I enjoy about the Spearhead family of games.

I am a fanatical fan of Great War Spearhead, and also play WW2 and Modern variants of the game. Take the Moderns period: movement, fire. close assault, ECM, chemical warfare, artillery/counter battery fire, air attack and defence.. the tremendously appealing aspects of this rule set are those multi layered challenges that the rules present, built around the need to first create a plan that combines time, space, objectives and forces.

OK.. The WH Fantasy rules don't go anywhere near that level of complexity, but I have the feeling that they are going to be a little better than I'd thought.

And anyway, how could you resist short guys with big axes and a great big pile of attitude to match???
at March 08, 2009 No comments: