Nick and I realised that this year was the 70th anniversary of the battle at Prokhorovka, around Kursk, on 12 July1943. So we decided that we'd try a 20mm Spearhead battle to mark the anniversary. Nick was itching to field as many vehicles as possible, and in his enthusiasm he misunderstood my suggestion that we both use Armoured Division lists, and took a 500 point list composed entirely of tanks.

Realising his error, I did suggest that he amend his list, but he decided to try it out anyway. So here we were, looking for a narrative that might explain the situation .. here goes.

The plains around Prokhorovka appear to be empty - the view looking south. 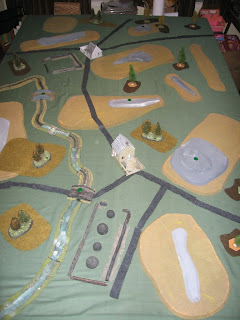 A solitary German armoured battalion has pushed ahead of its supporting infantry, hoping to exploit the apparent emptiness of the landscape to take and hold the vital river crossings. Glory must have been the agenda for the day. 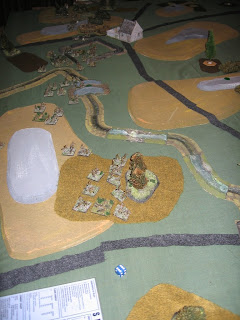 One of the two cross attached regimental groups pushes ahead undisturbed, moving into position for the intended flank attack.

The newly arrived armoured battalion takes up a position on the commanding high ground in the centre. 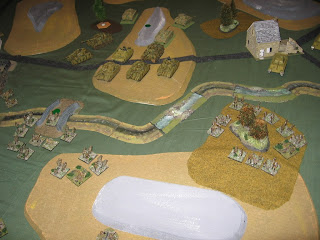 The Russian commander at this stage committed his reserve, manouvring against the German armour in the centre. 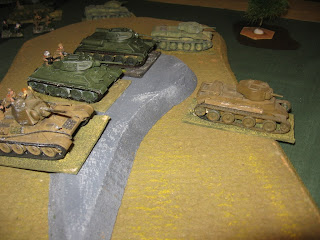 The first round of fire from the Russian went almost unanswered as all but one of the Russian tank platoons was well behind their flank, but the flurry of shooting gave no result. Clearly the Russian tank gunners were over-excited. One platoon of T34s is suppressed. 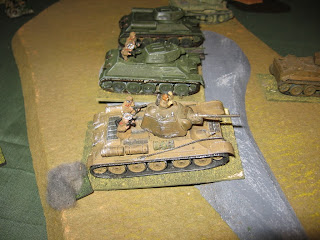 The southern flanking battalion receives a new order to move off immediately rather than wait in accordance with the initial battle plan, and begins to move behind the centre German armour. However at this stage the German commander also begins to redeploy the Panther battalion to meet the Russian armoured threat. 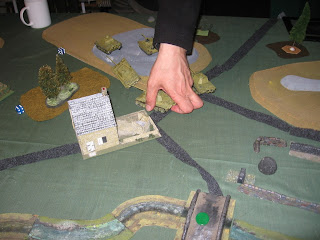 The Russian infantry have proved unstoppable for the unsupported German armour. The Russian forces hold 4 of the 5 objectives, and the German armour in the centre has failed its morale check and must withdraw.

The German commander curses the inability of his superiors to provide him with the infantry support that he needed, withdraws from the area, and the bridges are lost.

It was quite a learning experience for Nick I think... unsupported armour is so vulnerable. Next time he'll take a more balanced force I suspect