With the term break pressing on I am working at completing some additional parts of several armies, before work presses back on my time. I've had these 6mm British infantry painted up for some time, but on bases that were designed for an old set of rules (that didn't really care about basing, in fact). I've also got my first WW2 game for some time organised for next week, and the forces aren't quite up to strength for that, so what better excuse.

Even though re-basing is the bane of the war gamer's life, I set out to re-base them to expand the Late War British force for Spearhead. I've also added the anti tank component of the force with 17 pounder and 6 pounder anti tank guns. These troops will form the Lorried Infantry battalion  for the armoured division, or a part of a full infantry regiment for an infantry division. 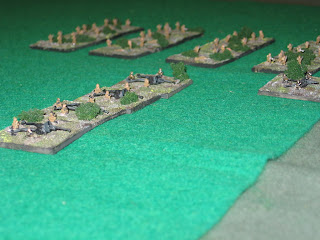 The battalion completed, with an HQ stand to be added (it was sitting in its box when I took the photo)/. 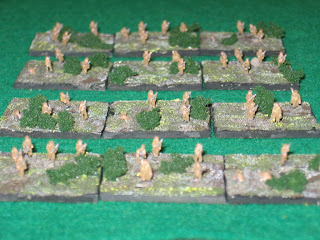 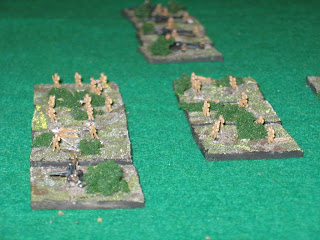 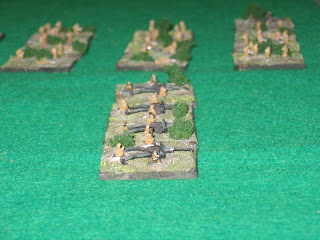 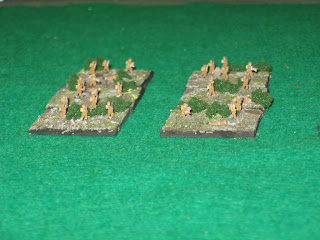 Now to get them onto the table. Sadly, the fact that I have more troops probably won't improve the quality of the tactics I use. It's a good job that our metal and plastic figures are pretty forgiving really, otherwise I'd have suffered a few mutinies in my time.
at April 15, 2010 No comments:

"On my command unleash hell.."

It was certainly one of those nights as we fought the second of the battles of Roman conquest of the Germanic tribes. The battlefield this time was divided by a river, with the bulk of the German tribesmen deployed waiting in a large forest area. 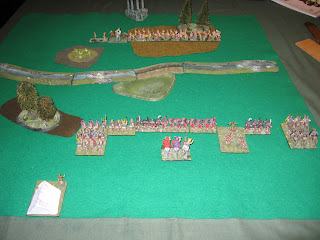 The Romans pushed their cavalry forward to try to cross the river and threaten the German flank. A '6', damn.. a very difficult river to cross.. a torrent after sudden summer rainstorms perhaps. 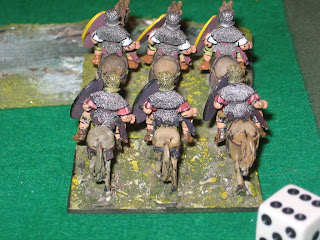 As the Romans attempted to work a crossing, the Germans pushed a line of warriors forward to defend the river bank. 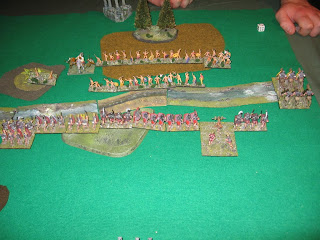 The Roman cavalry pushed around the flank, having finally managed a crossing of the river. The Roman ballista poured fire into the warriors in support of their cavalry. 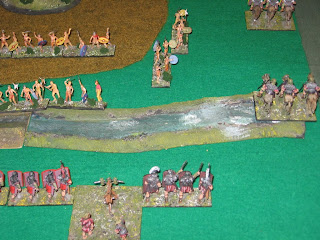 One unit of cavalry was caught by the German war band. A 1 to a 5, and it was 'night night nurse' for the cavalry as they were pushed off the table edge, first blood to the Germans. 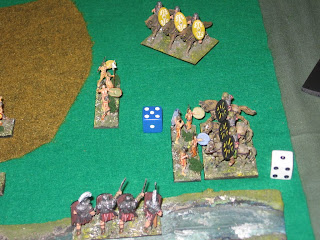 The Romans then started to push auxilia across the river on the opposite flank. 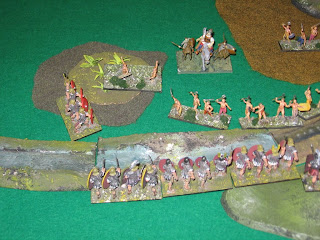 Meanwhile a unit of legionaries had also managed to cross on the Roman right, probably saving the remaining unit of Roman cavalry. 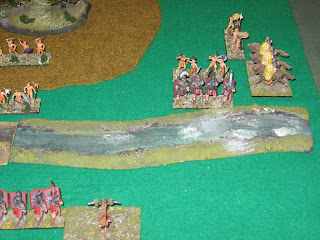 The auxilia were held by the German psiloi as their general rushed up to support them. 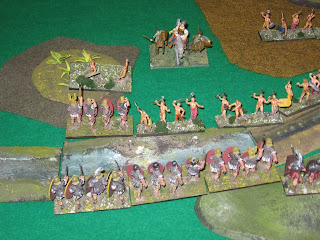 However the Roman ballista struck twice in succession, destroying two units of war band, while the legionaries that had crossed the river accounted for another. The Roman artillery crew had taken their Emperor at his word, and had certainly unleashed hell.

The Roman subjugation of the Germanic tribes was looking much more certain, although there was something about the spirit of these tribesmen that worried the Roman commander!!!
at April 13, 2010 No comments:

A night of DBA 'gaming with Nick, a fine opponent and good company. We dragged out two 20mm armies: Early Imperial Roman, and Early german - Trajan perhaps attempting to subdue the German tribes.

The first game saw the action take p;lace alongside the Rhine. The German tribes held their right flank back to protect themselves form the Roman cavalry, while pushing forward on their left to attack the legionaries. Light troops had raced on ahead to pin the legionaries, preventing them from taking up position on some high ground. 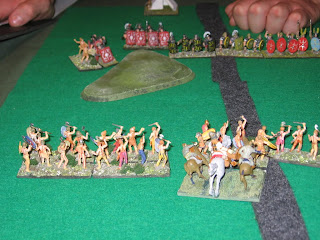 The Roman cavalry, lead by the Emperor, moved along the banks of the Rhine to attack the German flank. 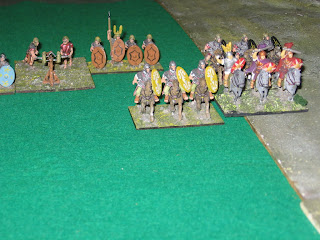 The Germans had taken up their camp in some ruins. 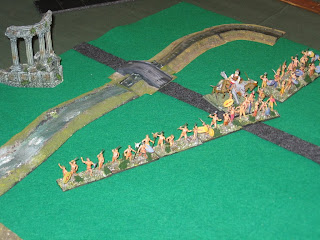 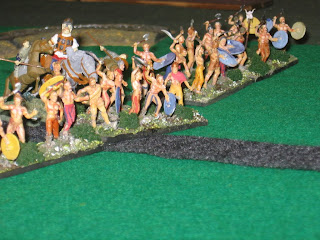 The first wave of war band attacked the legionaries on the hill, but the legionaries held against the first charge. One unit of legionaries ran, but there was a second reserve line behind to hold the war band. 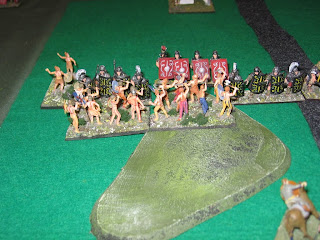 Meanwhile the Roman cavalry had moved onto the German flank. 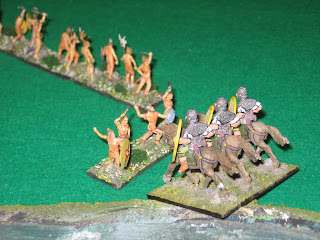 However some deft fighting by the legionaries cut holes in the German line. 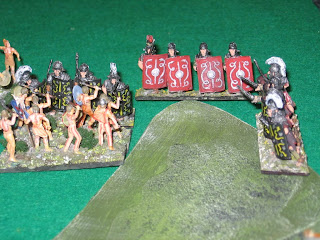 I am truly a wargaming 'social butterfly. Last week it was a 28mm Warmachine Steam Robot, and the week before 20mm British colonial infantry, both for the VSF HotT army.

Now it's 6mm German mid war armoured infantry for the mid war Spearhead armies. These Ros Heroics Sdkfz 251 and infantry will supplement the infantry and armour that already sit in their draws waiting expectantly for action. Their Russian opposition are also getting a little jumpy with lack of action. 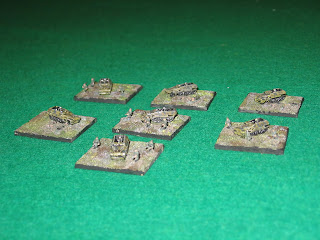 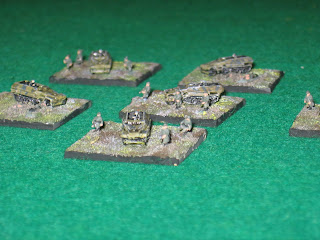 Still to come are a couple of battalions of PzIV F2, and some Flak.

Also on the paint board are the 17pdr and 6pdr AT supplement for the late war British, and infantry for another infantry battalion. Looking forward to some action with these guys.
at April 12, 2010 No comments: