One of my biggest frustrations in playing Warhammer 40K is the spread of stats and data across numerous codices, and across multiple pages in each codex.

Here's something that Adrian has done for years, and I finally got sorted for the Lost and the Damned army .. a unified stats sheet. 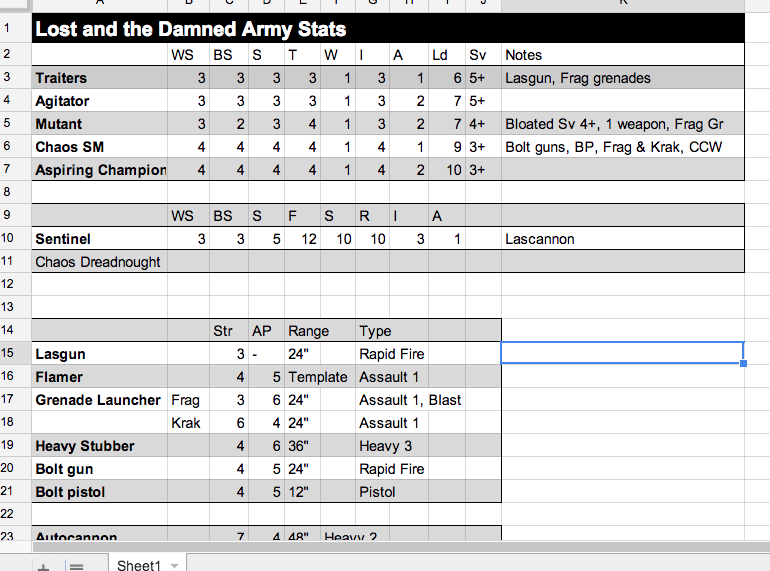 This is a screen shot of a part of the spreadsheet that I prepared. It  means that I have everything I need in order to use the army without that frustrating 'now where did I see that?' rustle of pages in mid game. It is especially important when using an army like L&tD which draws units from multiple codices.

If you play the game every week then by and large this sort of play aid becomes redundant. We don't. It certainly sped up game play last night.
at August 09, 2014 No comments:

Adrian introduced me to Warhammer 40K 12 years ago. The 'interest' at the time was fuelled by the desire to be able to understand the game that the boys at my College were playing when I first began teaching there. 40K 3rd edition was the thing, but the game 'evolved' so that it is currently in its 6th edition amendment phase. I enjoy painting the GW miniatures, and they look great on the table, but frankly rules creep fatigue set in early. We don't play the game often enough to keep up with the endless rules and codex changes. Our wallets also tire of the endless outlay in ever more expensive rule books.

Generally our only game opponents are each other, and occasionally Andy. We don't play in the tournament scene, nor do we participate in the 'friendly' club 40K 'gaming scene. So we took a decision. We would go back to 4th Edition Warhammer 40K, and the codices that we own.

This week we went back to that 4th Edition and played our first game of 4th in a number of years. We have thoughts on some simple house rules that we think will make the game better and, since we don't play other opponents, who cares. This first reprise we simply played the rules as written as best we could remember them as we flitted through the rule book, and we'll now think about those house rules with a little more clarity.

Adrian brought along his Necrons, and I cobbled together a Lost and the Damned list using the 'Eye of Terror' codex. This was the concept that first attracted me to try my hand at the game in 2002 and with the acquisition of a lot of Imperial Guard material over the past few years I was finally able to field 1500 points. This would be the first game I'd played at that size.

The Lost and the Damned army had at its core 4 units of Traitors, and one of Mutants, each of these were troops choices. In the spirit of the army concept I took a heavy weapon with each squad (although I remain convinced that this is NOT a game winning strategy). I also took a heavy weapons squad with heavy bolters, two traitor sentinels, and a Leman Russ. A Vendetta Gunship rounded out the selection of despicable traitorous vermin who had turned their backs on the Empire.

To finish the list there were some Chaos allies: a Dreadnought, and some Chaos space marines, all lead by an aspiring champion. 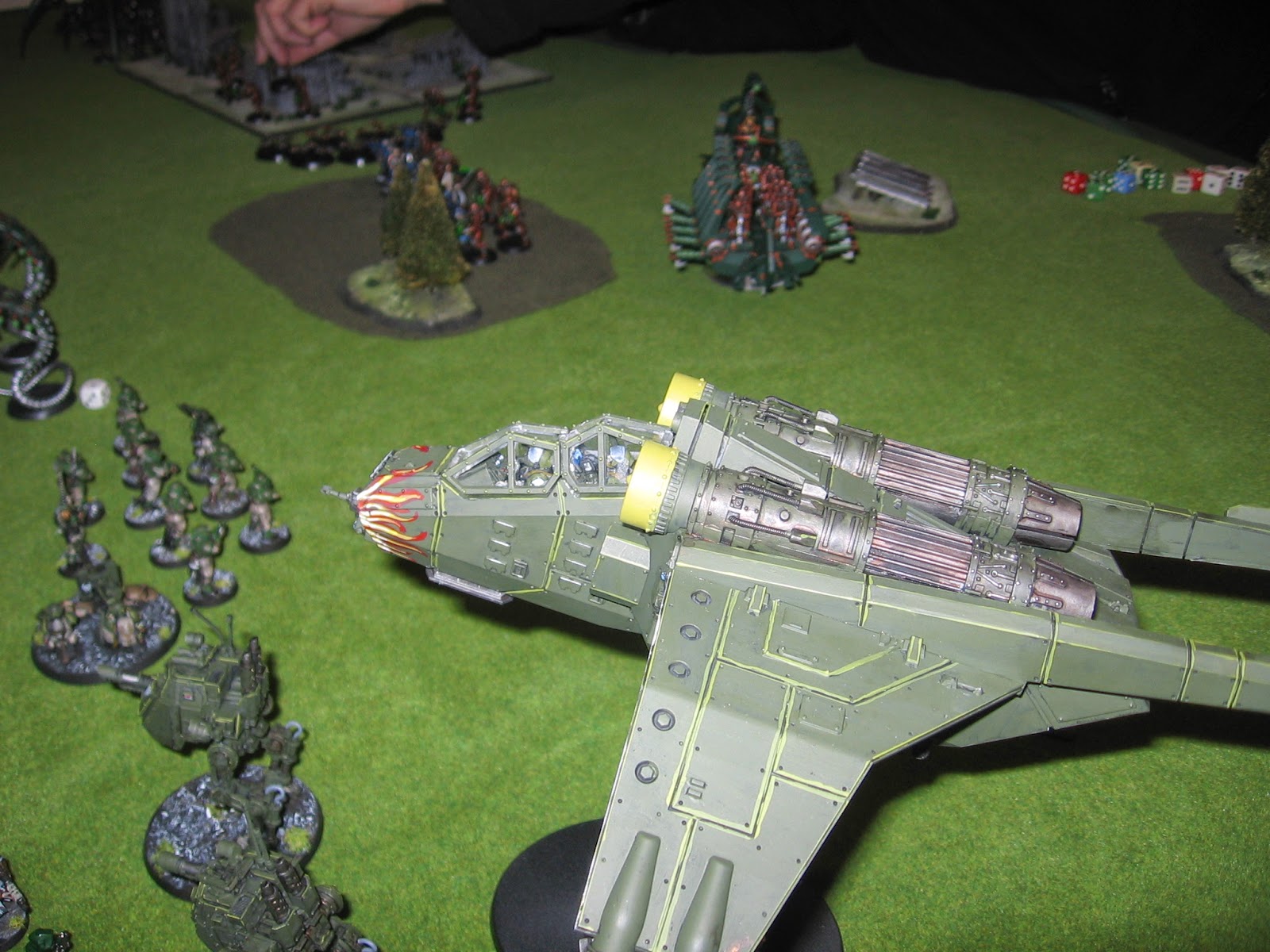 The final outcome was a draw that favoured the Necrons, but there sure were a lot of models off the table, representing a lot of points on both sides. The game had lasted about 2 and a half hours, and had played quite well. Now this was NOT a high order simulation of combat. It was NOT Spearhead, with its multiplicity of layers that demand good planning in terms of table, space, time, objectives, and resources. It did not contain all of those challenges that make the Spearhead rules set my favourite 20th century rules simulation

It was simply a game, with gorgeous models and lots of dice, and it was fun. We'll play it a lot more, staying with 4th edition. It will be our own little time warp, and we'll be happy there, as the rest of the 40K world passes us by. 40K 4th edition.. 'back to the future '.