Andy's Kingdoms of Men army is almost finished, and we'd promised a game again for some time. For a change I chose to use my DBA/HotT based Barbarians, very suitable for Varangur, one of the new races in Kings of War. The DBA/HotT basing doesn't quite match, but it is close enough for us.
The Varangur is a pseudo celtic race, and I took a warrior horde, two warrior regiments, two regiments of heavy horse and two of light horse (the mounted looked suspiciously Hunnic and Gothic in nature) and a unit of cave trolls (a mammoth proxying for the third troll. There was also a character as general.

Andy's KoM army had a regiment of foot guard, one of spear wall, two of heavy pike, supported by two regiments of those fearsome knights, and three troops of archers. These were lead by a captain and supported by an army standard bearer. Each army was approximately 1500 points. 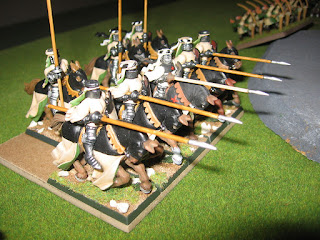 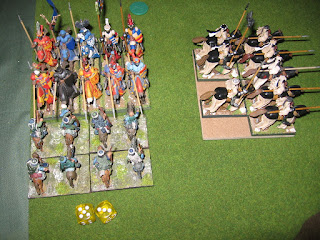 The game was 'Loot', and I managed to sneak across in my last turn and capture a third loot counter to Andy's two.. he'd slightly mis-judged and was about a centimetre too far away from his third counter.

We both felt that the game was an honourable draw, but a really exciting game, with lots of laughs.

So, I managed to make good use of an historical army of 20/25mm figures to create some interesting variety in our games, and visually it didn't look too bad despite the scale difference. The game was 'bloody' in casualty terms, but a really exciting affair which swung backwards and forwards from turn three to turn six. Along with the beers and food overall it was a great evening.
at June 24, 2017 1 comment: