Friday night, and it's 40K time with Andy and Adrian, since it has been a wee while since we pushed the GW (am I meant to say that no challenge to copyright is intended by using these two letters?) plastic around the table top.

Anyway, out came the Orks again, and they faced off against Adrian's Sisters of Battle in an objectives based game with Spearhead deployment. Andy ran the battle for the Orks and I joined in at totally inappropriate moments (it's a gift I have, really!!), while Adrian commanded his Sisters.

Andy deployed first and managed to keep first turn, so started with a mobile left of bikes, acccompanied by a truck loaded with Nobz. His intention was to strike behind the Sisters and attack them from front and rear around the objective on his left. 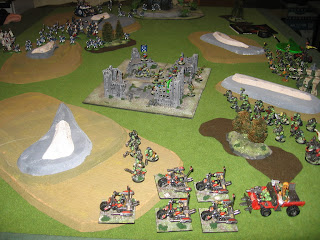 Adrian had deployed  Inquisitor Lord Karamazov on his own right flank, and the Lord Inquisitor soon moved to head off the fast Ork attack coming in from his right. 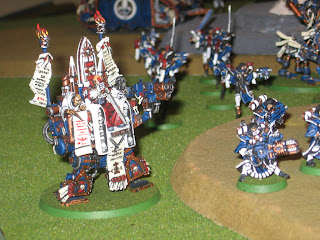 The Sisters had a unit of three Penitent Engines in the centre, and the Ork looted wagon with boom gun spotted these and had a crack straight away, with a shot that was bang on target .. one Engine exploded, but nothing else was quite close enough to be taken down in th resulting explosion. 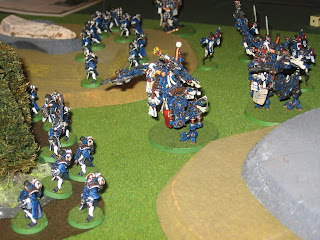 Meanwhile on the Sisters' left a squad of Sisters, supported by their Exorcist and two squads of Seraphim, moved out to claim the objective on that flank. 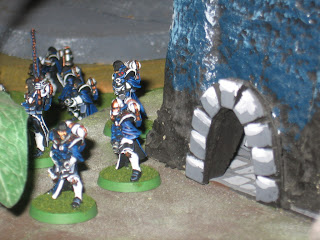 The Looted Wagon fell to fire from the Exorcist in turn 2..  before a single Ork had managed to fail his 'Don't touch dat' roll.. bother!!! We were looking forward to yet another laugh (the game had already been filled with quite a number!) 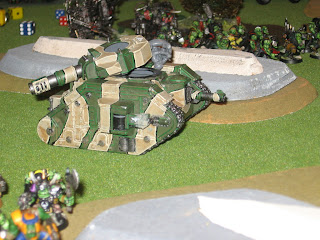 The Sisters advanced their centre against the other objective ... 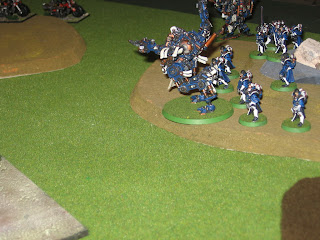 which was held by a unit of Grotz hunkered down in the ruins. 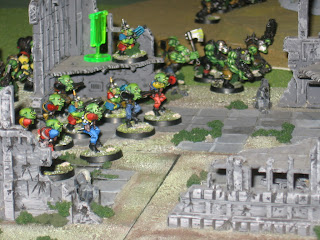 After a couple of rounds of fire there were too few Grotz left, they failed their leadership test and fell back.

Meanwhile Karamazov was having fun playing with the Bikes who kept passing their saves... much to his annoyance. 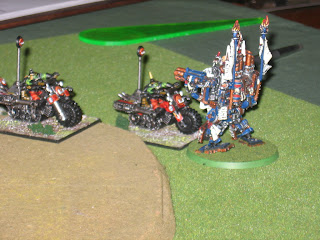 The second of the three Penitient Engines then fell to rocket fire from the two Killer Kans, and the war buggy, leaving one Engine, which then proceeded to assault a unit of boyz supporting the Grotz. Adrian then assaulted the war bugy with a unit of Seraphim and.. yep, destroyed it comletely!! Damm!!! 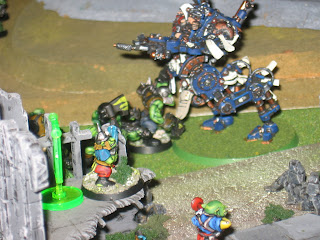 In all fairness to the Sisters, in their next turn they hit the Killer Kanz with a barrage from the Exorcist, and both were destroyed.. one blew up, quite spectacular as it took several boyz with it).

Meanwhile Karamazov was still tied down in combat with the bikes... gahhh!!! 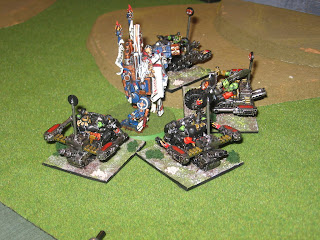 The truk borne Nobz were now within range of the Sisters Squad on the Sisters' right flank, and Gazghull declared a Waaaagh, allowing them to make the assault. 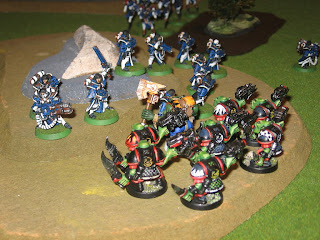 ... and Gazghull charged into combat with the Penitent Engine (would you believe that we forgot that he had a power claw?) so he made hard work of this combat.. he was locked there for the remaining turns of the game. 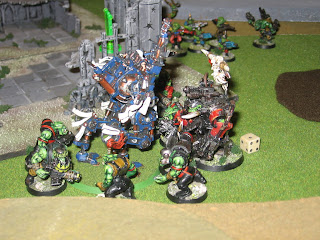 The boyz mob on the Ork right flank used the Waaagh to charge into contact with one of the units of Seraphim (before they got shot away!!). 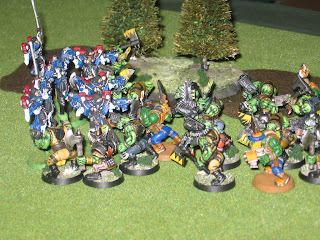 Adrian pulled them out of the combat hoping to eliminate the unbti with massed fire. There were still a few left though (and they still passed their leadership test) and next turn Andy pushed what was left of the mob into a squad of Sisters. This was ugly (for the sisters). Despite their low numbers (yep, they'd managed to pass every leadership test.. whew!! I wasn't used to this with Orks) they inflicted enough casualties to win the combat. The sisters failed their leadership test, and were run down by the boyz. 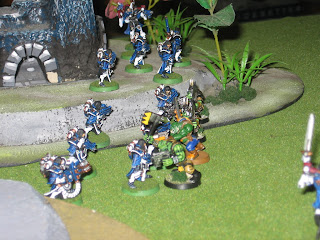 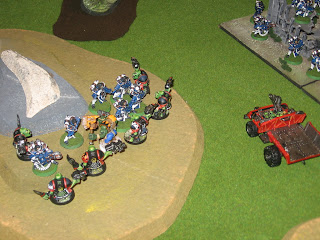 The Nobz were still slugging it out with the other Sisters squad. 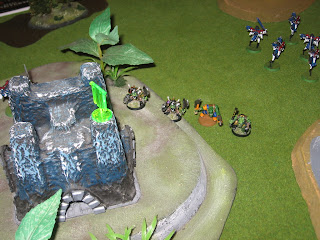 A unit of Burna Boyz had meanwhile been trying to creep up on a third unti of Sisters (mwahahahahahahaha). They took fire, and these were their saving throws!!.. Don't see that very often.. since they needed 6's!! Yep, there are only two 4's, the rest were their saving 6's!! 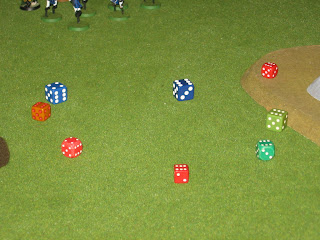 However this same unit of Burna Boyz then took fire from the Exorcist, which proceeded to wipe out the unit... an ignominious end and such poor reward after their deft avoidance of bolter rounds from the Sisters squad.

The game ended after 5 turns, with a hard fought draw.

Interviewed after the match, Gazghull could only say "Wot a bashin' .. yeah right.. sissie girlies, come on den bring 'em on, eh!"
at June 11, 2011 No comments:

Just pottering ... with the Royalists.

I've finally started to get the painting pottering bug (well, maybe). Having played a few DBR condensed scale games lately, I decided to give the Royalists a little TLC. When I'd originally acquired them (previously painted by someone else) I based them on thin card bases (as was my habit at the time).

With the troops back on the table top the thin bases have been annoying the beejeebers out of me (as they tend to slip and slide over each other all too easily), so I cut enough thick card bases to rebase them all (by gluing the exisiting bases onto the new rather than detaching figures from the old bases.

While we were at it I gave them a small subtle make-over with a couple of layers of a Citadel wash (Badab Black) to bring out the recesses on the figures.

Voila.. the final result.. slightly better than before, nothing fantastic. Those close-up camera shots tend to be pretty unforgiving though!! 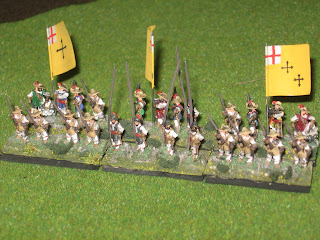 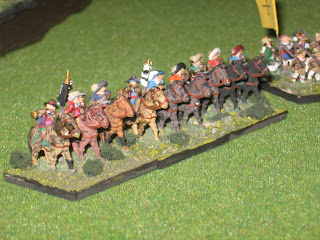 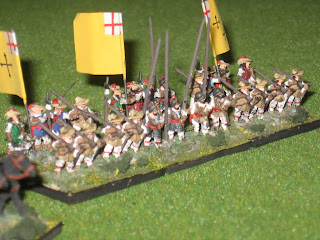 A condensed scale DBR last night with my Royalists taking the field against Keith's Parliamentarians. This time I felt somewhat let down by my Horse and their inability to deal with their parliamentarian opponents. 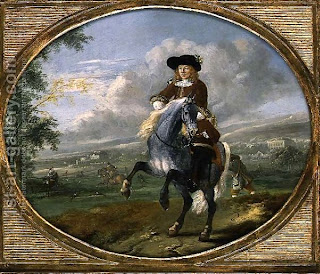