Somewhere on a distant battlefield, hiding very carefully, is a Company Commander from the Cadian 198th, muttering "Gee that went well, didn't it". This is the guy who commanded a company of the 198th last night when the Sisters came to play.. play you say? Yeah right!! 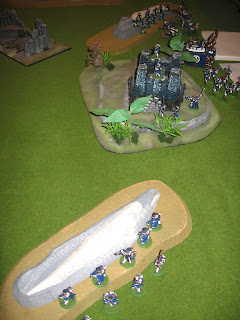 The boys began well enough it seemed, hunkered down with a solid firebase and some armoured supports. A unit of Storm Troopers supported by a couple of scout sentinels was working their way around the Sisters' flank. Seemed like a great plan ... 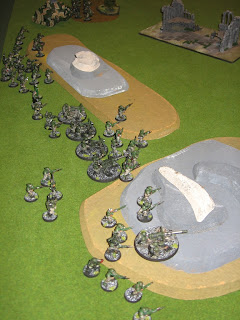 Except for a group of three Penitent Engines .. ok, they can be shot away easily, and they are confronted by some of the might of the Emperor's armour!! 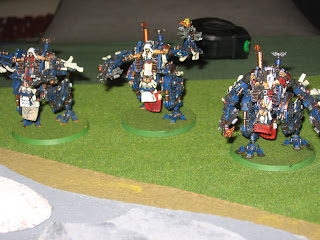 But the 'Holy Rage' was strong in these girls .. whew, get outta the way!! 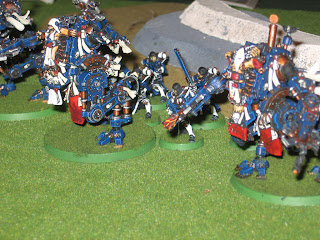 On the other flank a brave squad of Sisters, supported by their Seraphim, thought they'd like to get more intimately acquainted with some of the 198th's boys. 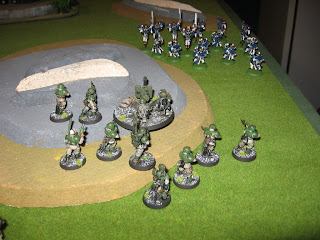 The Penitent Engines were incredibly keen to have a crack at a squad of veterans hunkered down in cover, supported by the armour, and with a holy priest present to help them maintain their focus (his eviscerator was rearing to go too). The veterans had the task of protecting the left flank. The Penitent Engines threw 5s and 6s for their extra moves.. they were very keen!! 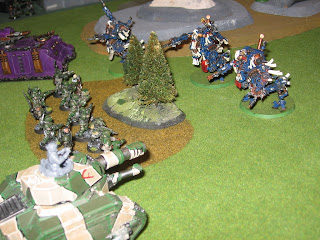 There was the usual heavy support for the Sisters too. 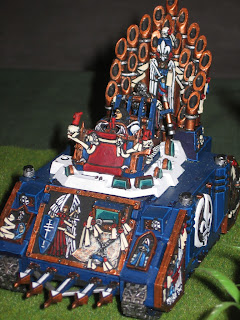 However I positioned the Priest badly, and the boys just couldn't do the business. Result: one unit down and a very exposed left flank. The company commander had a worried look on his brow. 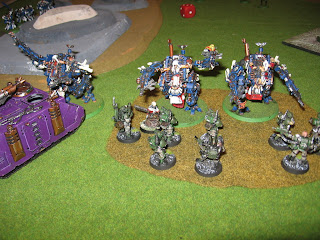 On the other flank the infantry squad took a turn of heavy bolter fire. The commander had sent a medic to support the squad, but he succeeded in failing EVERY one of his 'Feel no pain' throws, and almost the entire squad was wiped out. Now there were beads of sweat running down the Company Commander's brow. 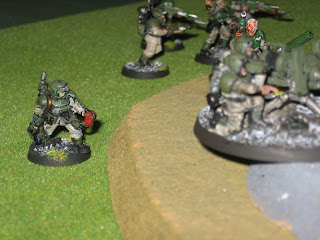 Then the Stormtroopers arrived.. at last.. the Seraphim were hit by a veritable storm of fire from the Storm Troopers, the Sentinels, and a supporting squad from their front. Only problem - the Seraphim made all of their armour saves despite a large numer of wounds. NOW things were looking dodgy!! 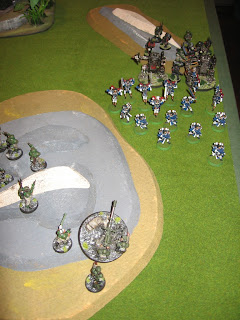 Meanwhile on the other flank the Penitent Engines were rampaging on .. they took on the combined squad that was protecting the other flank and wiped it out (you wouldn;'t believe the throws Adrian made in combat.. oh yes you would), while the Exorcist finally managed to get a decent shot at the Leman Russ and destroyed it.

'Every man for himself' may well have been the company commander's last cry as he fled the field... sigh!!! 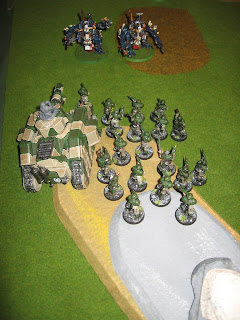 The final tally was something like 7 kill points to the Sisters, and 0 to the 198th. How many mistakes did I make? Whoa... I haven't got that many fingers and toes... maybe one day I'll learn how to play this game.
at January 22, 2011 2 comments:

Last Friday started out with the best of intentions: play our first Great War Spearhead game in a few months. Ah, but we were clearly on that 'road to hell'.... The day morphed into a couple of DBA games (one using 15mm armies and the other using 25mm armies), and then a couple of HotT games (with lunch and a couple of beers interspersed.. the joys of the holiday season, but sadly drawing to a close all too quickly).

In the DBA games Nick used Light Horse armies in both (Early Ottoman in the first, and Hun in the second) and managed a win in both, much to his relief as he'd had quiet a drought on DBA victories recently. I have to say he pretty much tore me apart in both games, and we are wondering whether light highly manouvrable armies are more suited to his playing style? He has tended to use slower more solid armies in the past.

A couple of shots of the Romans taking on the Huns. 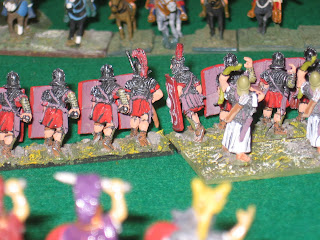 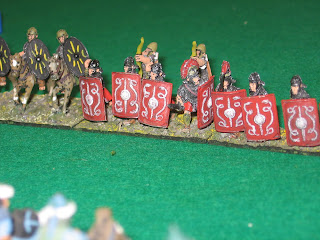 And a couple of shots of the HotT games. Lorraine played her first games with her new HotT armies, Angels, and Evil Women. Lost the first, but won the second... nice going!!! 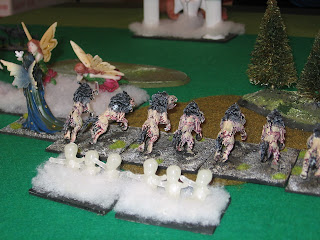 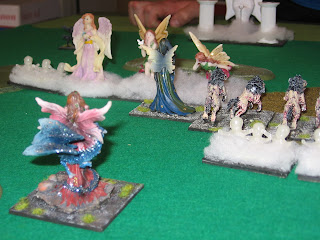 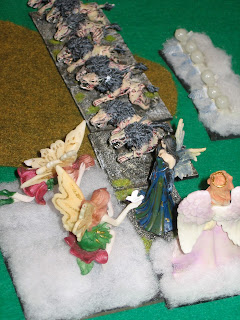