Andy has been on the  look out for a set of fantasy rules for a while. He'd tried WFB, and we had played HotT together numerous times, but I suspect that these hadn't quite 'hit the spot'. So last week he mailed me with the Mantic Games rules set 'Kings of War' by Alessio Cavatore. So 'Kings of War' it was, last night. My Dwarves came out of early retirement (I hadn't actually managed to do anything WFB'ish with them in the finish), and out came Andy's 'Humans' (GW Brettonians) .. one of his 'I'll get those painted one day' projects (it's the artist's temperament you know .. he paints divinely!!). 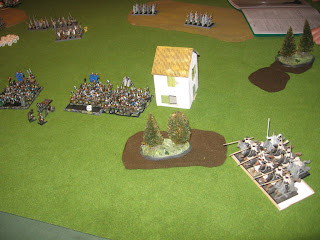 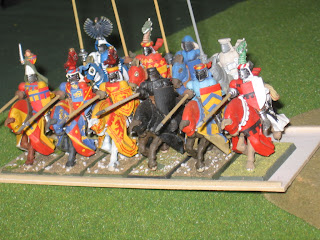 Dwarf Berserkers attack a poor unit of Human archers. ouch.. cut through them, like a hot knife through butter. 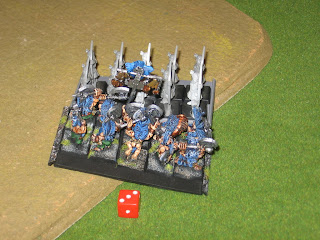 A head-on clash in the centre, with Dwarves attacking Swordsmen and Spearmen. 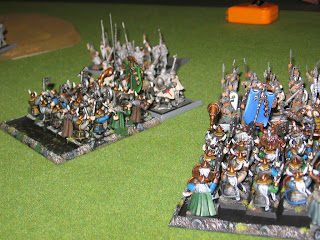 Andy managed to get his two units of Knights around the flanks, and first attacked the Dwarven artillery. 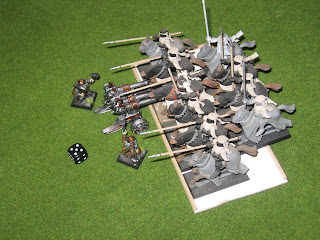 Then they took on the Dwarf regiments. 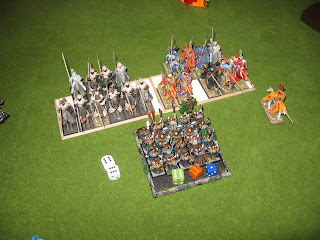 One of the Dwarf units was a 'horde'.. a 40 strong unit. Andy attacked it with both units of Knights and the victory was his. 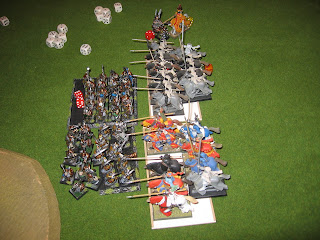 So, what did we think?

We picked up the rules very quickly (there are only 12 pages in total) , and they played very cleanly. The mechanisms didn't appear to create super units. We had simple armies, so there was little in the way of magic. The specific army rules (and there aren't too many of them) created some character in the armies, and is clearly an area that can be developed and exploited to create 'characterful' play.
We liked the fact that we weren't ploughing through 100+ pages of rules plus army books, trying  to mentally collate across numerous pages -- this has always seemed like too much effort for us.

The rules seem to be so simple that  we feel that we will be able to pick up a game only every now and then and still find the rules 'accessible' or 'playable'. I also suspect however that they have some subtly that will reward clever play.

These definitley get the thumbs up from us. Adrian will be getting his long held fantasy forces out of a prolonged retirement, and my Dwarfs will now take to the field of battle; that has to be a good thing too.