The rise of Chaos

Rumours had been coming back from the Badlands for months. Terrible rumours. Rumours that took courage to repeat, rumours of things that made the blood freeze, things that should never be mentioned. The King had decided that action must be taken, he could not stand by and allow such things to continue on the borders of his realm. His knights had answered his call, and they had pushed on through the Badlands and into the wastes of Chaos.

It was on the sixth day that they first beheld the terrible sight of the citadel of skulls carved into the cliff face, blue lines of lightening coursing across the skull that sat leering at them from hundreds of feet above. As they advanced, lines of figures, foot and mounted, appeared before them, crackling with the discharge of energy that made them shimmer blue to the eye.

Dragons soared in the skies above as Sarmatian horns blew and neat ranks of knights moved forward, intent on crushing this foul foe. 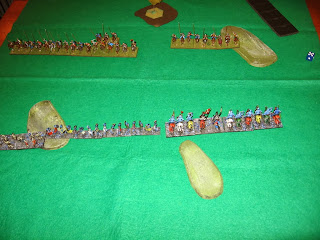 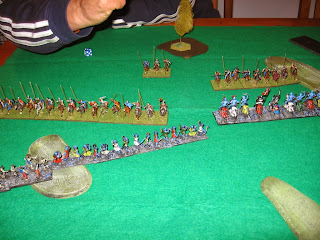 Grantus gave the signal and his knights and retainers charged forward on his left flank. The crash of lance on shield, the cry of men and horses, shook the very earth. 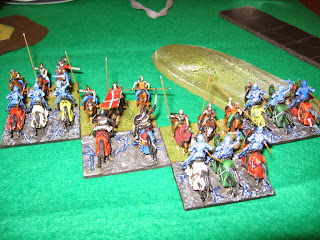 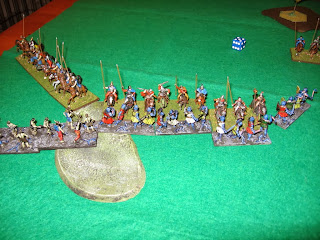 The initial charge was contained, but Grantus began to push his foe back, oblivious to the threat to his flank. 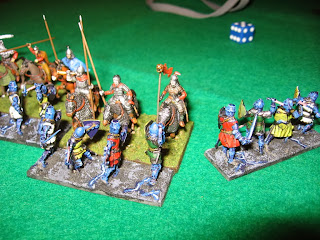 The tussle continued on the Sarmation left, the knights crashing again and again into the Chaos Hero who sat in their midst. 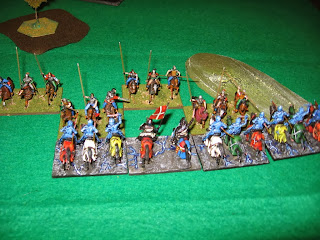 Sarmatian knights fell to the foul energies of Chaos. 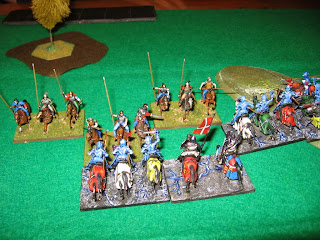 Grantus fell as more Chaos footmen fell upon his flank, and his knights realised that the day was lost. Horns blew, horses whinnied, men died, and the knights began to withdraw. 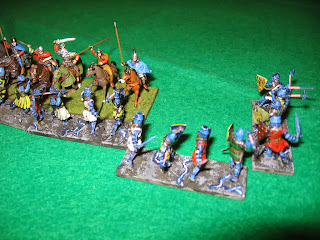 Atrocities looked destined to continue in the Badlands.

Nick G and I met up for some wargames action. With my pinched nerve injury, standing and leaning over a table would be problematic so we were playing HotT seated at the dining room table. Nick fielded a Sarmatian army, while I ran my Chaos force. Both armies included a dragon, neither of which showed their faces in this first of three games. But there was more to come. Here is Nick's account of this first battle. The armies are 20mm plastics. Nick's Sarmatians are one of his more recently completed armies, with many conversions on the bases.
at October 09, 2013 1 comment:

... but I WANTED them. The 20mm Spearhead Russian forces for mid war eastern front are pretty much complete. But... I've always liked the look of the Russian T26 (despite it's less than stellar performance on the battlefield) and when I saw the S-Model boxes (theoretically 'quick build') how could I resist. 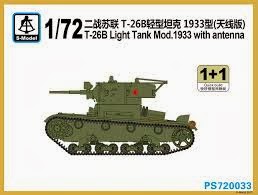 I applied perhaps slightly too much black wash (they both got two coats) but the look is suitably 'dirty' and used rather than fresh from the kitset box'ish. Many of the parts are beautifully finely cast, but I felt that this was a disadvantage. The suspension units were easily broken if care wasn't taken removing them from the sprue (I manage to break only one), and the antennae are so fine that they too are difficult to remove from the sprue. One of the two actually had two breaks in it 'in the box'. I may still go back and remove the antennae from around the turret as they are not essential, and perhaps mis-represent the Russian tank forces early war at least, when radios were few and far between. 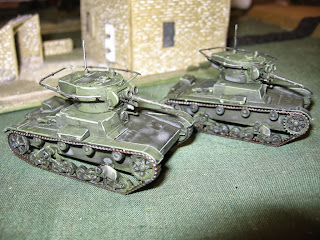 The kits also came with brass etched parts, most of which I didn't use. . there was no way that they would survive wargames handling. 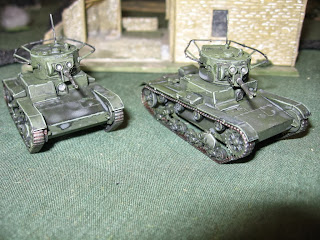 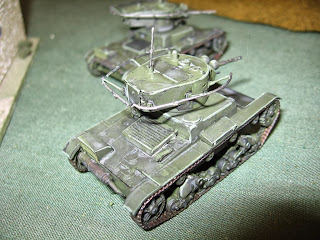 However when all is said and done, they are a nice model, and they will create some nice visual variety on the table alongside the BT7s and T34s.

Big 'thumbs up' to S-Models, it's just that these are possibly not as robust for my gammy fingers and thumbs as I'd prefer.
at October 09, 2013 1 comment: