When we play our games, most of us wnat them to look good. I've traditionally used a dark green cloth as my basic playing surface and I'll probably continue doing that when using the whole of my 8'x5' table. However I've been thinking for some time about buying one of the Games Workshop 'gaming mats, and this week I bought one. Here are a few photos of my 1982 BAOR British taken to show off the new mat (some chieftains with some ATGW and air support) ... I think it looks pretty cool. 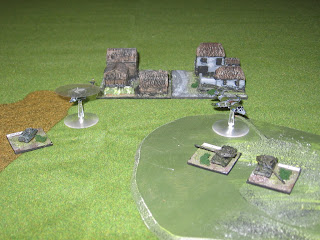 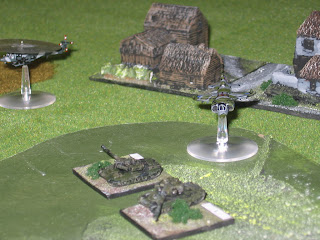 When I bought the Imperial Guard figures that have formed the basis of my Inquisitorial forces (until the next Codex changes things.. soon??) the big attractions were a reasonable price, and the fact that almost all of them were painted. However there were a few that weren't. So, as the Cadian 198th recruits, I have had to paint these figures. Fine, no big deal, except that I really needed to match the existing paint scheme and technique as closely as possible so that these new figures would fit with the remainder of the figures. Only issue for me was that Elliot (the painter of the original figures) had used washes whereas I use layering. So the challenge was on: replicate the existing colour scheme using washes.

Here is the result, and my first attempts at using washes on this scale. Not quite an exact match, but close.... (close enough for a cigar, anyone??) 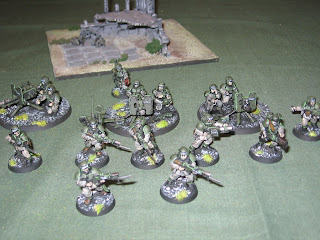 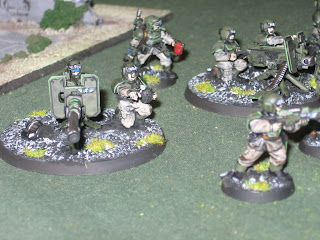 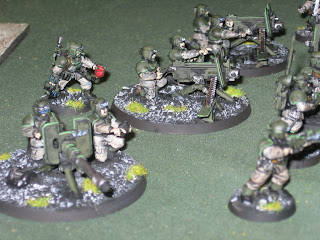 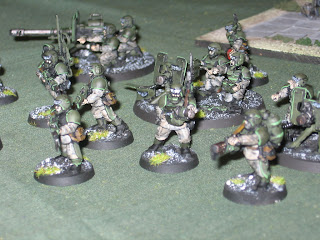 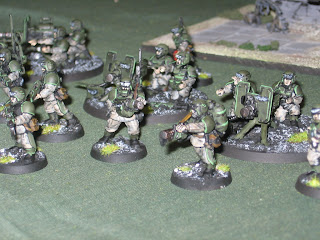 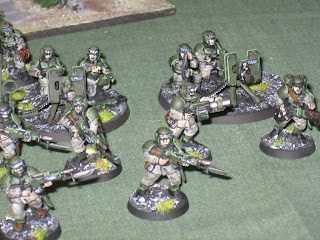 While overseas I picked up a copy of 'The Battle of the Frontiers, Ardennes 1914' by Terence Zuber, and I have been dipping in and out of the book for several weeks. I can see that this is a book that will reward re-reading. I am struck by two quite different thoughts as I read the book, and wanted to try to record my opinions on what I have read. So these are my thoughts and opinions recorded as an interested reader on history of the period, and someone with only a vaguely scholarly background certainly not someone with a PhD!!) 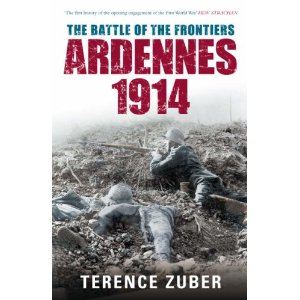 The first observations are a little negative. Quoting from the rear jacket cover "Terence Zuber is a retired US Army Major. He received his PhD in history from the University of Warzburg." Given these credentials I am staggered at what on the surface seems to be extremely poor historiographical technique. The chapters are well footnoted, but the edition I purchased (Tempus Publishing, 2007) has no bibliography at all. I have therefore found it incredibly difficult to follow up any of what I assume to be a rich array of source material that Dr Zuber has used in writing the book. This omission is sufficient to leave me wondering about the quality of the sources in the first place, as some of his conclusions are quite profound. The quality of the proofing is also poor, with numerous typographical errors scattered regularly through my edition of the text. These issues may well reflect more on the editorial support that Dr Zuber received, and I wonder if Dr Zuber felt well served by the publishers?

I am also wondering about the balance of Dr Zuber's views. He spends the first 74 pages reviewing tactics and training of the German Army up to 1914, and less than two pages describing the French 'Operations and tactics', followed by two and a half pages of comparison. As a reader I felt slightly cheated by this imbalance in material. I wanted to know more of the French training in order to be better equipped to form my own views.

Having said that, I am not in the position to challenge any of Dr Zuber's conclusions. He brings his own operational background and training to his analysis of the operations that took place over the period 20-23 August 1914 as he pieces together a story that has certainly not been adequately told in English until now, and on this score his work is highly significant for those of us on the English speaking side of the historical record.

The other fascinating aspect of my reading of this book was the reflection on the actions as described when compared with the Great War Spearhead rules that I use to wargame this period. Dr Zuber has made extensive use of regimental diaries to get to the heart of what happened at regimental and divisional level as the various actions unfolded.  He describes firefights lasting 4 and more hours between French and German units, with one side (most often, in his descriptions, the French units) breaking and running under the impact of this fire. He posits that this is testimony to the quality of German infantry fire discipline that this happened so often, and on the basis of the evidence he presents this seems to be a reasonable conclusion. He also describes German responses to specific situations that reflects the types of training that the German Army employed in its training areas prior to 1914, with better tactcial responses to these situations than the French Army managed. Essentially his claim is that the French Army was out-fought.

These observations support the mechanisms and outcomes that we experience when playing games using the GWSH rules set. Hopefully Shawn Taylor (rules author) will feel well satisfied with the mechanisms that he has employed as a simulation of the command and control issues that arise when commanding troops at the divisional and corp level, and the outcomes that his rules produce.

While the earlier issues that I have described left me feeling as if I hadn't quite had a full meal as a reader, this is a book well worth reading, and re-reading, and I would highly recommend it to anyone interested in this period who hasn't read it yet.
at November 28, 2010 No comments: