Time to try out the newly acquired Inducted Imperial Guard troops, even if I haven't yet had time to finish their bases, nor to paint the unpainted heavy weapons and others. The boys faced off against some older but still beautifully painted Eldar; Adrian's wraith army from the Craftworld codex. Enjoy these photos, mostly of Adrian's beautiful Eldar. 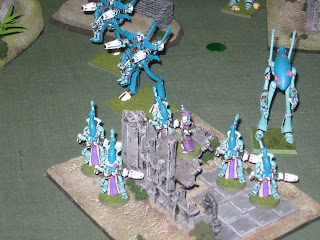 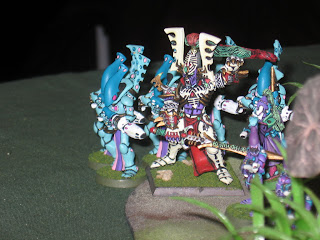 Some of the Guard eagerly advancing - maybe some of these lads aren't too bright, me thinks, there's a very nasty daemon lurking out there, with an awful lot of heavy fire support from a heap of Starcannon!!! 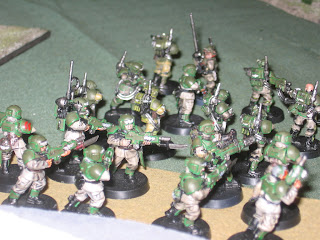 The Inquisitorial team look intent on business, as you'd expect. 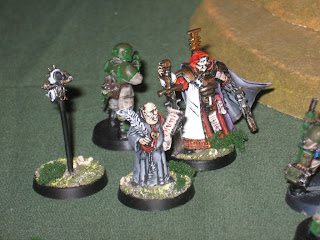 There's even a Leman Rus there to offer at least some moral support, although the boys were really hoping for a lot more than that. 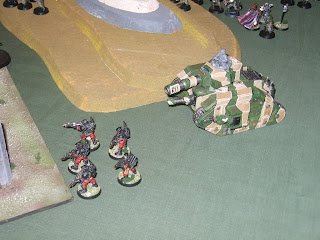 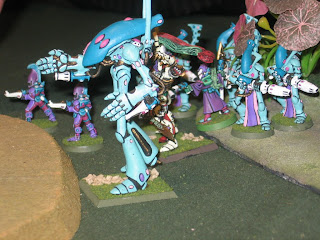 Wraith Guard with their Warlock -- my Guard Squads and Callidus Assassin managed to account for both warlocks, but the Wraith Guard didn't seem at all phased in the end. 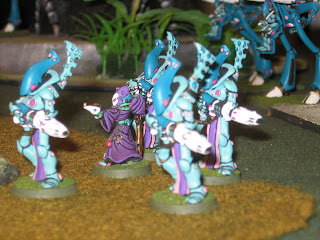 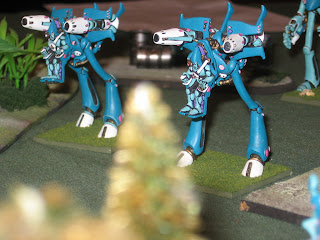 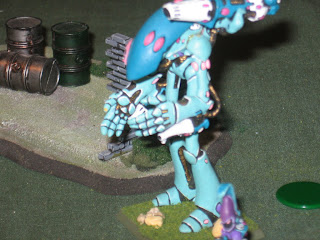 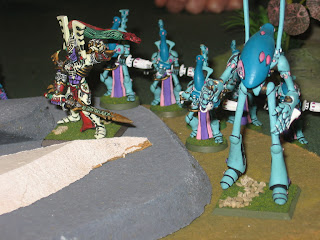 The final 'face-off' between the Inquisitor Lord and the Avatar had to happen.. but the game was already lost, the Eldar held both objectives, and there were an awful lot of Guard bodies lying around. 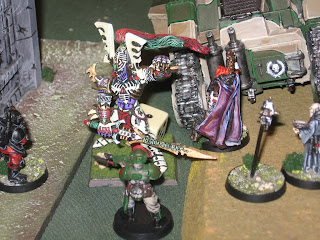 Well I might have bought the figures for the next next project (the Inducted IG for a Daemonhunters army in 40K) but that doesn't mean I'm leaping straight into it. There is still plenty of other unfinished business that is higher up the queue. I've been expanding the WW2 Spearhead armies. There's plenty of Russian equipment for early and mid war, but the only opponent they have had until now is an early war German army. So, I started work a few weeks ago on the freshly arrived PzKW IV F2s for mid war eastern front battles, and a few Panthers, with some Flak, for a later war morphing of these same forces.

The PZKWVs set to go. 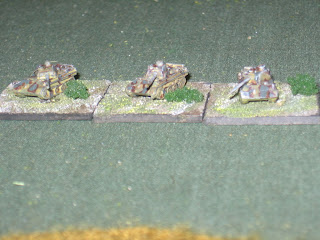 Their flak support... in other rules sets I've played these were typically almost 'super weapons', but Spearhead makes them effective but not unbeatable.. I like that. 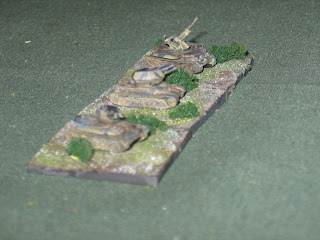 The flak, with some STUGIIIs in the back ground. 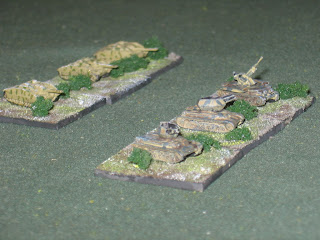 And enough PzKwIVs for two battalions, although using Keith McNelly's Scenario Generation System I'm unlikely to field this many, but  "bit of a mess up on the ordering front, Reggie".
I was very happy with the camouflage scheme as it finally turned out on these. I used a GW Kommando Khaki and Tamiya Desert Yellow base, with a Devlan Mud wash. This created the yellow base with brown patches which was then completed with the addition of green patches. The wash worked out remarkably well. While possibly not quite accurate I wanted troops that would be OK for mid to later war scenarios. 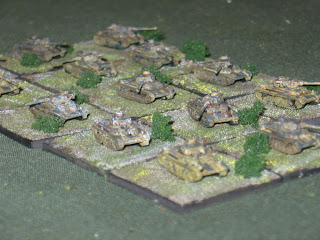 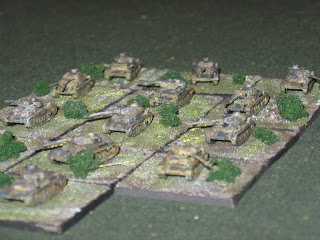 And finally back to the few late war additions. I think I should have ordered some PzKwVI Tiger Is as well, but maybe next time. 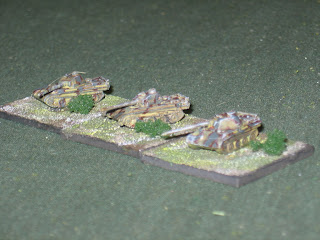 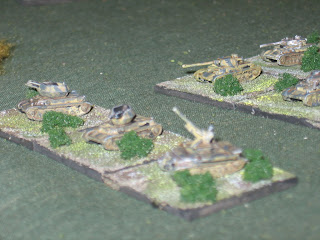