It's all about 'finishing' you see... finishing projects that have been long started. The 20mm Spearhead projects are new life breathed into 20mm collections of old, and In have actually thoroughly enjoyed the refurbishment and re-basing of those long since forgotten and newly rediscovered tanks and figures. Since I have openly declared to Lorraine that I ma trying to 'finish' projects before I start new ones, I was quick to point out that these most recent acquisitions are just that: the air power component of the three 20mm Spearhead armies that have arisen phoenix-like from the ashes. Andy had offered a surplus 1/72nd scale Ju87 for the mid and late war Germans. 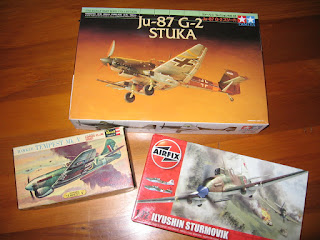 Then yesterday when, in one of those mental 'fugs', I wandered in to Acorn Models in Christchurch and spotted a 1/72nd scale Sturmovik, well, the WW2 Soviets needed some air power, so.. 'aspirational purchase' number (some number to the power of, well ...  'lots', really) complete. I text 20mm Spearhead gaming mate Nick to say I'd bought the Sturmovik, and had hoped to find a Typhoon for the 1944 Brits, only to find that they were out of stock.

Phone call from Nick: "I have an old Tempest kit here, got it years ago, never assembled it, you are welcome to it if you want'. I was round there quicker than a rat up a drain pipe. The Tempest has always been one of my all time favourite WW2 aircraft. Must be something to do with one of those war comics I read as a boy - I used to keep them hidden in the wardrobe because my parents didn't approve!). Nice simple kits, all three... I have 10 more stunts/grots to paint, and then.. guess what has jumped up to the top of the projects list? Thanks Nick and Andy ... sooo cool!!!