Of Marshall Katukov, the record says: "On the onset of the war he took command of the 4th Tank Brigade. In the battle of Moscow in 1941, it was Katukov's Tank Brigade, then part of the 1st Guards Rifle Corps, that checked the advance of Guderian's Panzergruppe 2 near Tula. "

And so the scene was set for last night's Spearhead game, my Germans attacking Keith's newly painted Soviet forces. I've taken a liberty there with the reference to Katukov, because Keith's force was taken from an infantry division organisation. It does however make the point that there were pockets of competence, and even brilliance, in those early days of Soviet defence.

The Germans were executing a hasty attack against a Russian force of three infantry battalions and an armoured brigade.  Andy commanded the Soviet right, and Keith the left, while Jim commanded the German left and I took the right, with the deep armoured thrust. The forces were relatively thin on the ground after several weeks of hard campaigning, and division hd allocated strong artillery forces to the attack to try to shoot the ground forces onto their objectives. 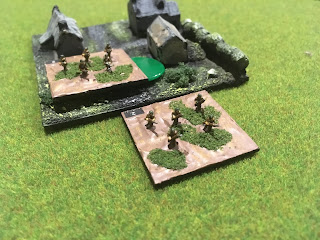 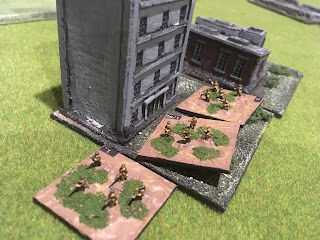 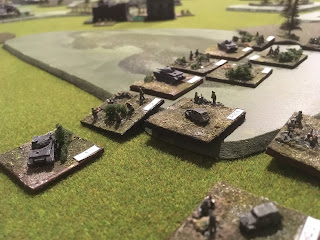 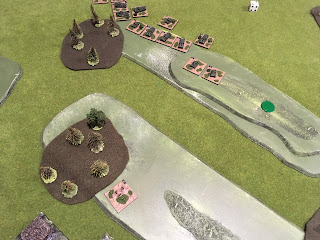 We hd to call the game at this stage. The VP situation favoured the Soviets 5:2 in what had been a really interesting action.

My choice of attack list for the Germans was most probably too heavy on artillery, and needed more troops on the ground. We had both take an Option A, mine being a battalion of 170 mm guns for Counter Battery work. Keith had done likewise. His CB had been spectacularly successful, eliminating a complete battalion of German 105mm guns, while mine had eliminated one battery of his CB 152mm, and suppressing the other. The German artillery, normally reasonably successful, was a dismal failure, suffering repeated die rolls of 1 or 2 to acquire. Andy on the other hand had a series of rolls of 5 or 6 to acquire, and then hit, the German artillery.