Games Workshop's Warhammer 40K isn't a game we play a lot of, although I suspect that few would deny that the figures they produce for their games are beautiful.  Tonight was however another 40K game, with Adrian deploying his Sisters of Battle against my Space Marine Brothers (my 'Les Voies Sacrés' Chapter) in a 1250 point face-off. Well actually my force was an Inquisitorial force based on the now very old Daemon Hunters Codex. My force was based around an Inquisitor Lord with a couple of acolytes,  two small squads of Storm troopers and a Callidus Assassin. Any veteran 40K players reading this will probably laugh at my experiment (???) but i opted to ally a number of small SM tactical squads in support of the Inquisition, supported by two small Devastator squads and a Dreadnought.

Adrian's force was based around four tactical squads of Sisters, a Penitient engine, an Exorcist, and a penitent engine.

The game was an 'Annihilation' scenario from the rule book. We play so little that we made a heap of mistakes, included in which was my singular inability to read a stats line, giving my assassin 3 wounds instead of 2, thanks to one reader for pointing that out .. LOL .. Oh well.... 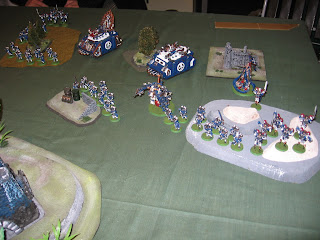 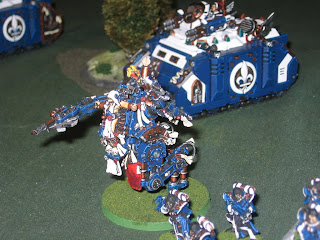 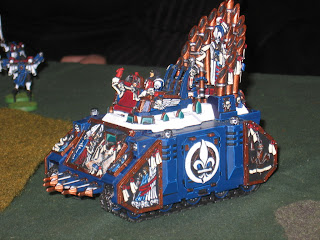 Devastator Squad with two plasma cannons, not destined to cover themselves with greatness during the game. On their first turn of firing they both rolled a '1' to hit, and one of them failed his armour saving throw, and then on the next turn the other also managed a '1', and proceeded to fail his saving throw. They did more damage to themselves than to the Sisters (well actually they did NO damage to the enemy at all... sigh!!!) 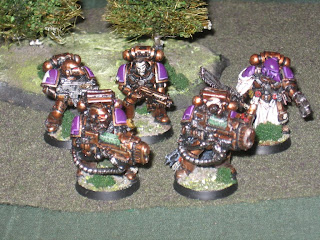 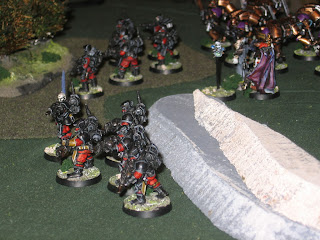 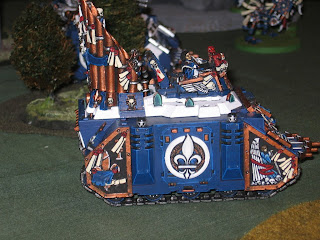 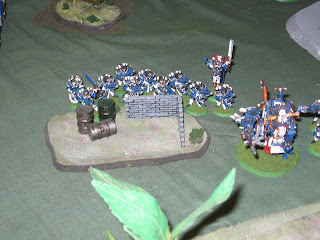 Seraphim advancing behind cover, with penitent engine and Sisters squad in support. This was a very effective combination. 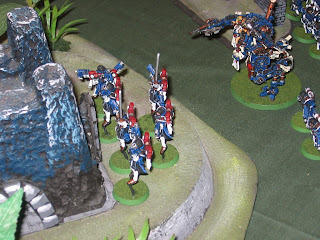 Inquisitorial storm troopers advancing to cover the left flank of the army. Two squads of these guys advanced to cover my left flank, and with their flamer, and Hellguns, managed to take out an entire squad of Seraphim (sadly after they had destroyed my own Assault Marines, but you can't have everything!!). 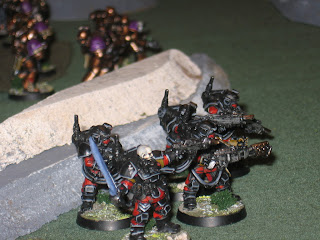 OOO .. that penitent engine again.. NICE!!!! ...nasty in combat too. And did I say that I really like the look of the Penitent engines???? 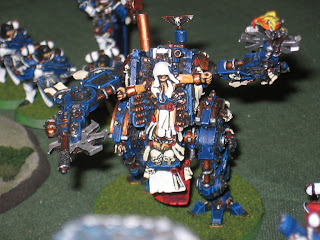 The Callidus Assassin struck in turn two, taking out the sister commanding the opposing force (a tough lady, I have to say, with quite a temper on her.. she inflicted 2 wounds back before falling to the assassin's blade), and then locked in combat with a Sisters squad for several turns. Eventually they wore her down. 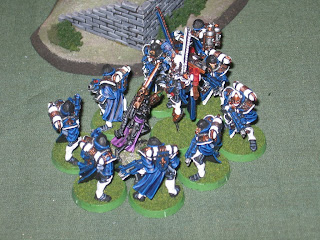 I used my Assault squad badly ... if you play this game you can probably tell that this isn't going to end well for the assault marines, it's the Sisters' turn prior to their assault phase. 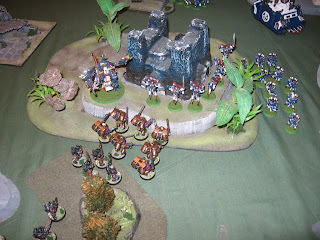 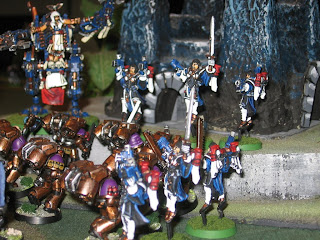 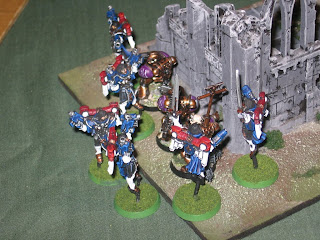 Overall Adrian took the game with 6 VPs to my 2, but a very enjoyable game, and nice to get the armies out again. It has motivated me to re-activate a long lost project to build a decent Inquisitorial force, with an Inducted Guard option (just because it appeals to me, I suspect it won't be that effective, but I don't play enough to judge) but more on that later.
at May 15, 2010 3 comments: