I've been plotting and scheming a new project for some time: France 1940 in 20mm (inspired By Adrian's 15mm forces). While plans for this slowly advance, I realised that with the judicious purchase of just a few more 6mm vehicles I could actually complete the forces required to play France 1940, British vs German, with my extant forces.

Way way way back in 1974 good friend Pete and I planned to play this period in 6mm using the original WRG 1st edition W2 rules. While we never did, I certainly purchased some of the vehicles required, some of the original Skytrex vehicles. They have sat unused for .. oo let me see, no.. that must be .. um .. OMG .. 41 years. They were painted way back then too. So I got on line and ordered the vehicles necessary to fill out the Spearhead TOEs for the British (I have the German forces already).

With that done I sat down to base up the vehicles I have: 6 x A13 Cruisers, 2 x A9 Mediums, and 2 x Matilda MkIIs (I have quite a few more of the Mk IIs but in the SH TOE an armoured regiment is likely to have two Mk II stands and 6 x Mk I stands). Yep, the Mk Is are in that Heroics and Ros order placed yesterday, good for very little on the table top, but so enigmatic of the BEF in France. They'll provide that target rich environment that the Germans love while the Mk IIs get stuck in with their .. oh wait, they have 2pdrs.. oh well, certainly still capable of giving the German army a nasty fright.

I also had 9 x M4 Shermans which I'd bought as a part of a larger collection some years back too (the 1990s somewhere). I hadn't based them because I use the Cromwell MkVIIs when I field an armoured division force (and Churchills when using an armoured brigade in support of an infantry regiment), but they would make a nice visual change on the table top, so .. they got based up too.

Oh and I had this sitting in the pile - an M4 equipped with mine rollers. It's one of those things I'd probably never use, but .. well I felt morally obliged to base it up anyway. 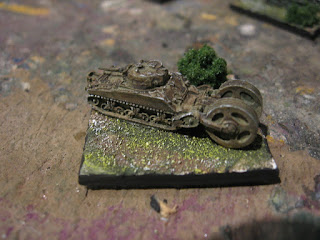 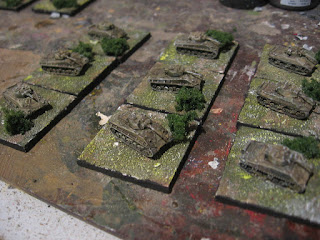 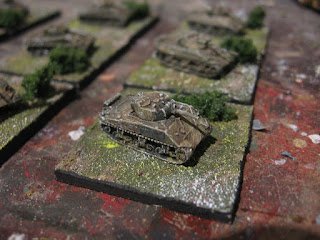 They all received a wash with Citadel Nuln Oil, and then a very light dry brush with white, and... that's 20 more vehicles based for WW2 Spearhead, including the core of that British force in France in 1940.

Before I tackled the Defiler I came across four Space Marines (the last four from a previous second hand purchase), and thought I might as well paint them up. I thought 3 might serve as a company HQ to accompany a SM Captain, while the fourth was someone else's conversion for a company Champion.

They've sat on top of the paints drawer almost finished, as I realised that 3 of them were missing power armour shoulder pads (not to be confused with the '80's fashion abominations of the same name). While 'ratting' through the spares box yesterday looking for SM Biker parts for the Chaos Bikers I came across some spare shoulder pads, so thought I might as well get these fellows sorted too.

The photos aren't quite up to the usual standard.. but you get the idea. 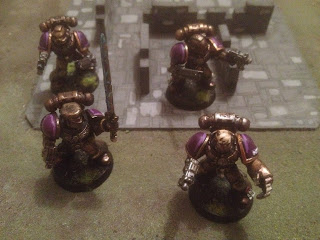 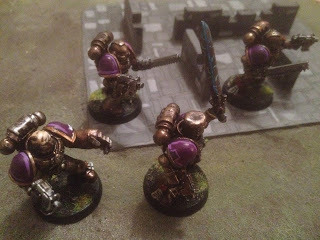 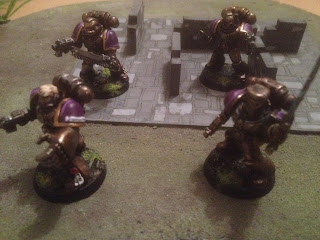 They are painted in the baroque bronze and purple colour scheme that I chose for my own Chapter invention 'Les Voies Sacre' .. my WW1 leanings are apparent there).

Righto, back to those bikes.. mind you I have a few 6mm 1940 Brit vehicles I ought to base up for some ratting good 1940 France Spearhead action too .. just a few A13s, a couple of A9s and several Vickers Mk VIs.. ooo go on, you know you want to!!! Problem is I need just a few more on top of the ones I already have to finish that project, nah seriously just a few, honest Lorraine. It finishes that project too. Really.. it does.

Oh, and in case you hadn't noticed, it's term break!!

Ever had one of those moments where you complete a model or project and then wonder .. um, what next? Aha ... So many projects, such  a'pile of lead' (figuratively speaking, of course) that you really don't know what to start next.

There's a pile of 6mm WW1 figures for Great War Spearhead, the 28mm Perry's figures ready and waiting for the next Kings of War army (and the 2nd Edition of their rules only weeks away), the 15mm figures all ready for the DBR Ottoman army, and .. actually it really does go on. I think I've posted this sort of list before.

In the face of all of that I opted for more of a modelling project. A month of so ago I picked up a selection of Chaos Space Marine Bikers in varying states of repair for a very reasonable price from a generous local 'gamer. There were 6 complete bikes, and enough parts to complete another 2, while in amongst my spares from other second hand purchases are the parts to complete another one or two on top of al of that. So .... here goes.

Painting may be a bit of a challenge as they are mostly already assembled. I prefer to pre-paint as much as I can before assembly (it's just a different approach). First task is to complete assembly of the incomplete models using the variety of parts I've managed to 'excavate' from the spares box.