One of my long standing fascinations was with early jet aircraft. In this regard I have also had a long and unsatisfied interest in the Korean conflict. So I have been accumulating additions to my existing late war allied and Russian armies to fight actions in Korea, but also in some possible 'cold war gone hot' scenarios set between 1945 abnd .. say .. 1955), all using my fav Spearhead rules. So it all started with some later armour (a Centurion that I'd bought a LOOOONG time ago for some long forgotten project, to which such things as late model Sherman Easy Eights have been added), all to pit themselves against the ubiquitous T34/85 and hopefully a host of other late war and post war armour (I'm on the look out). This project is a continuation of the 20mm Spearhead armies as distinct from the 6mm armies with which I more usually fight. Look on it as an excuse to make late model 1/72 scale tanks and aircraft AND have a use for them. After all, collecting and making models just to trap dust wouldn't be the done thing, would it.

Here is the first bit of modelling to bring these interests in early jets, and post WW2conflict, together: a MiG 15 jet. I do need to paint the framing on the canopy in order to say it's complete. 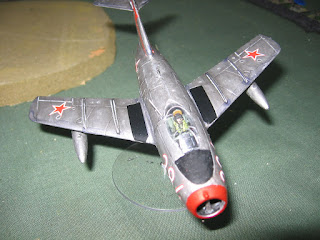 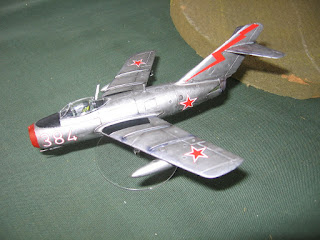 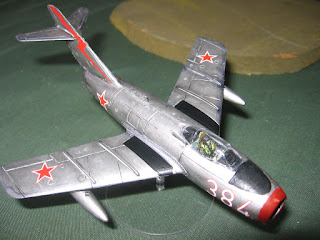 Now before anyone says anything, yes I know that the MiG was a fighter designed to fight for air superiority, while Spearhead is a ground action set of rules. So realistically MiGs shouldn't appear over the table in ground support roles. But .. frankly I don't care, these are just such awesome looking aircraft, how could I resist? Awaiting assembly are a DH Vampire (much more likely to be used in a ground support role as it was, flown by Kiwis, in the Malayan crisis) and an F86 Sabre.

In the meantime here is some video footage of a MiG 15 today. Enjoy!!!