It has been a while since I played any HotT, so Nick G popped around and we thrashed out two cool games. In the first I fielded the Victorian Science Fiction army, lead by none other than Major General Caruthers, and featuring that debonair inventor and adventurer Lord Chelting of Cheam with his wondrous flying machine, and downy faced young hero of the Empire Lieutenant Winstanley. Their foes were a sinister Sarmatian horde fresh from the foreign steppes. 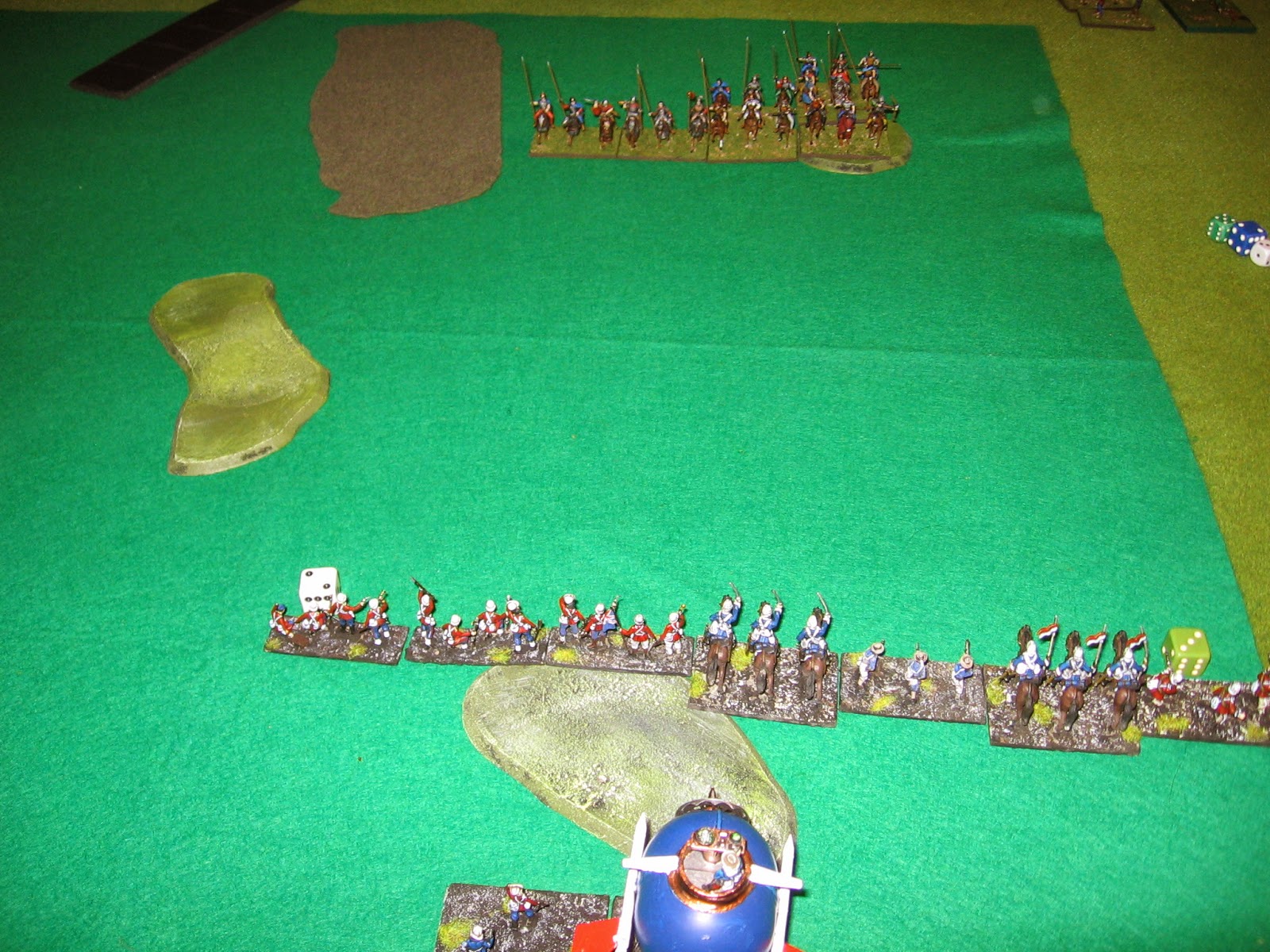 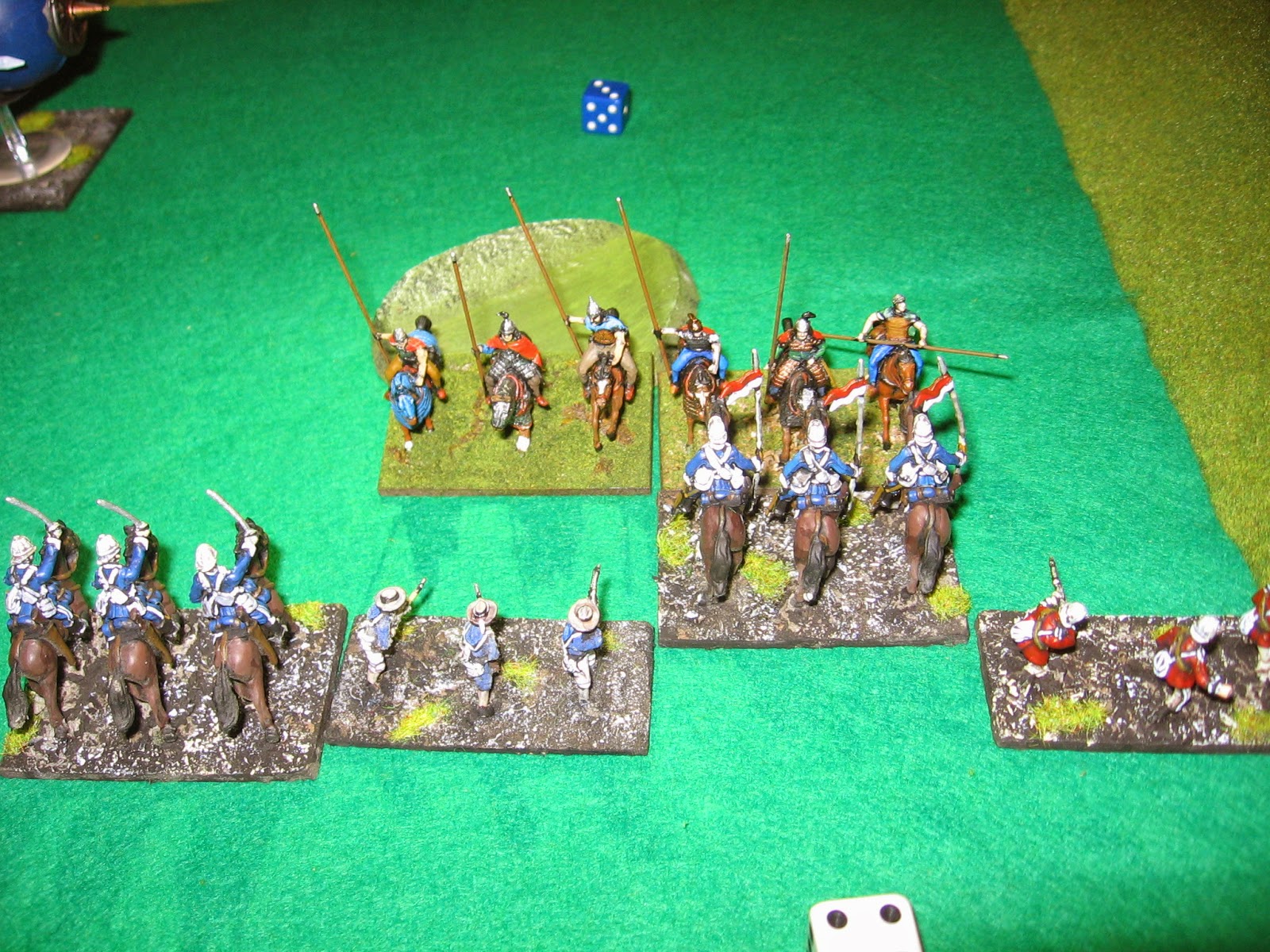 And so it ended, the Sarmatian host driven from the field of battle. Caruthers would be writing a glowing despatch to Horse Guards this night.


In the second battle, I took my 'Lost Worlds' army against Nick's Undead. 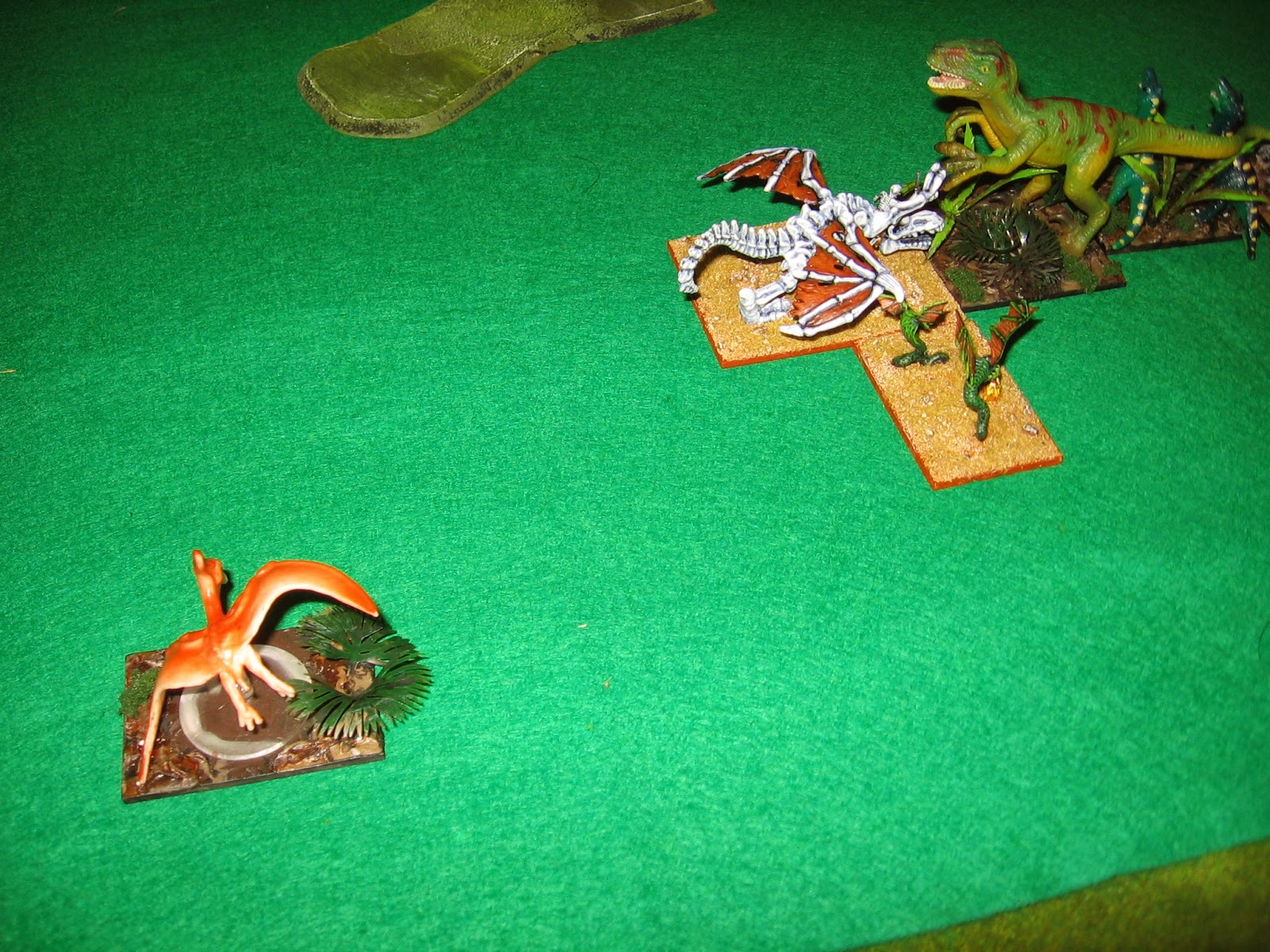 Two really interesting games, but I have to say they went perhaps unfairly to me in both cases. Nick's die rolling as such that he won a mere THREE combats in the entire two games. Even when he set up combats with good odds he was at best getting draws, but more  combat often losses. With my Lost Worlds army the great gorilla god failed to show, and yet the army was still victorious.

Good fun, but somehow I know that the Gods of Luck will play with me next time, and Nick will have his revenge.

More of those French infantry, 1914, but this time the Heroics/Ros figures. 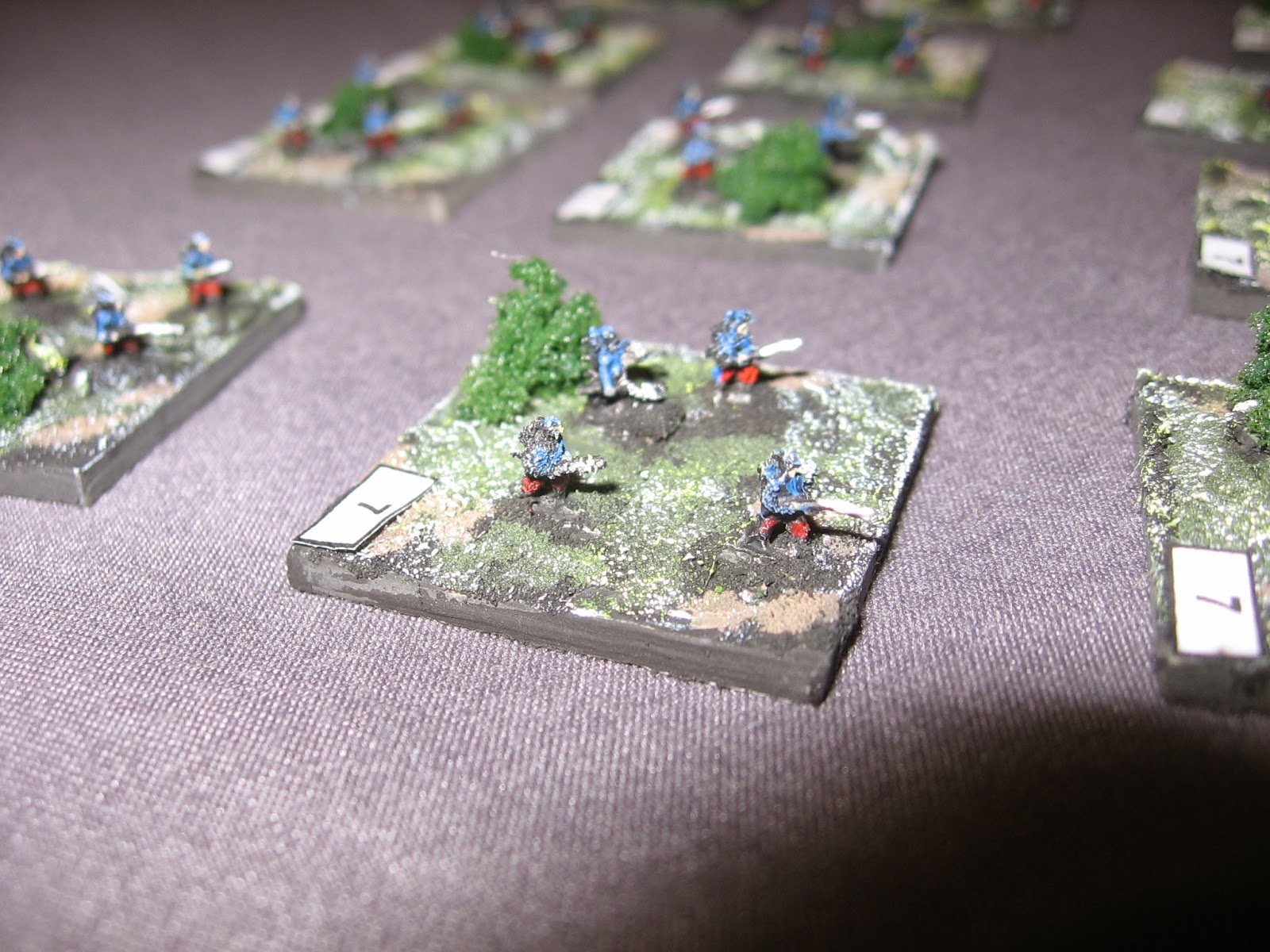 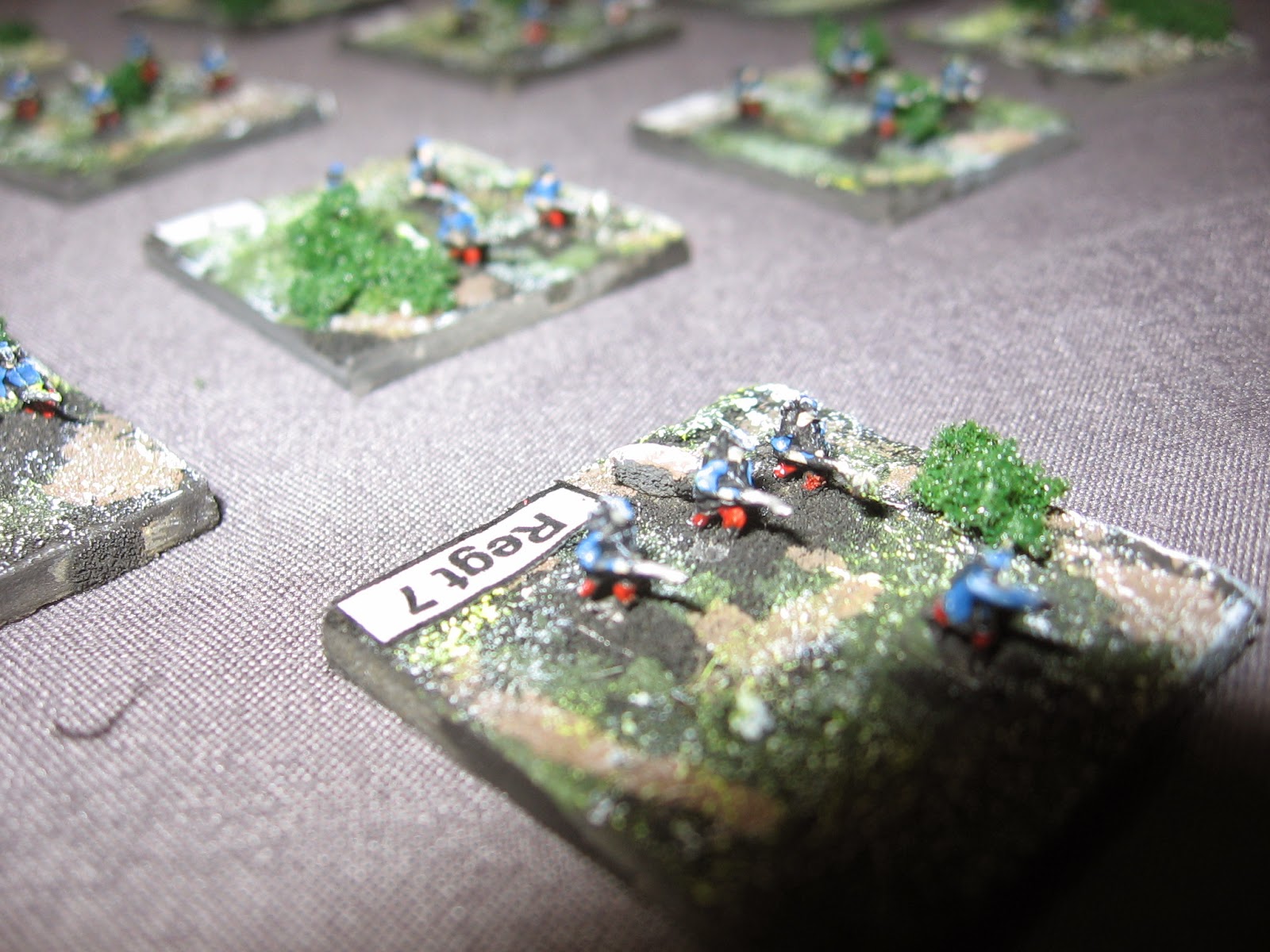 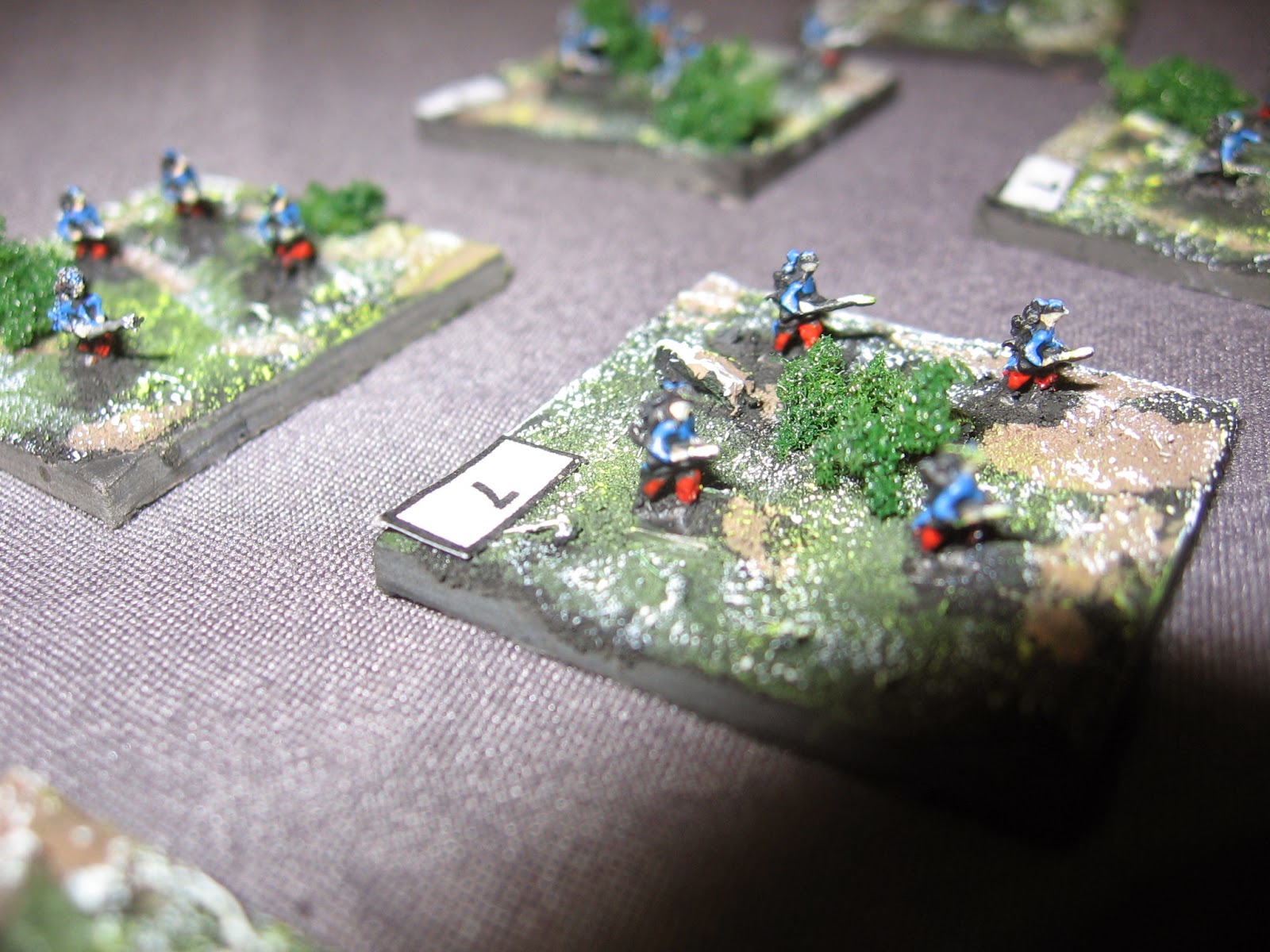 This is the third of four new regiments for the 6mm 1914 French army. This latest batch did include the additional MMG stands to complete the two earlier regiments. One more regiment to go, and then the equivalent for the German 1914 army.
at September 12, 2014 1 comment:

It were bl***y massacre it were

Time for another bash at our Warhammer 40K 4th edition revival (although I am feeling a little schizophrenic shifting between 6mm and 28m figures). Adrian and I got together for our second game (we decided we'd play a number of games in as close a succession as we could to re-familiarise ourselves with the rules  and game play generally). We took the same armies that we'd used in our previous game - for me the Lost and the Damned, and for Adrian his Necrons. The game was a 'Cleanse' mission, with forces setting up in opposite quarters of the table, and victory determined by possession of table quarters. 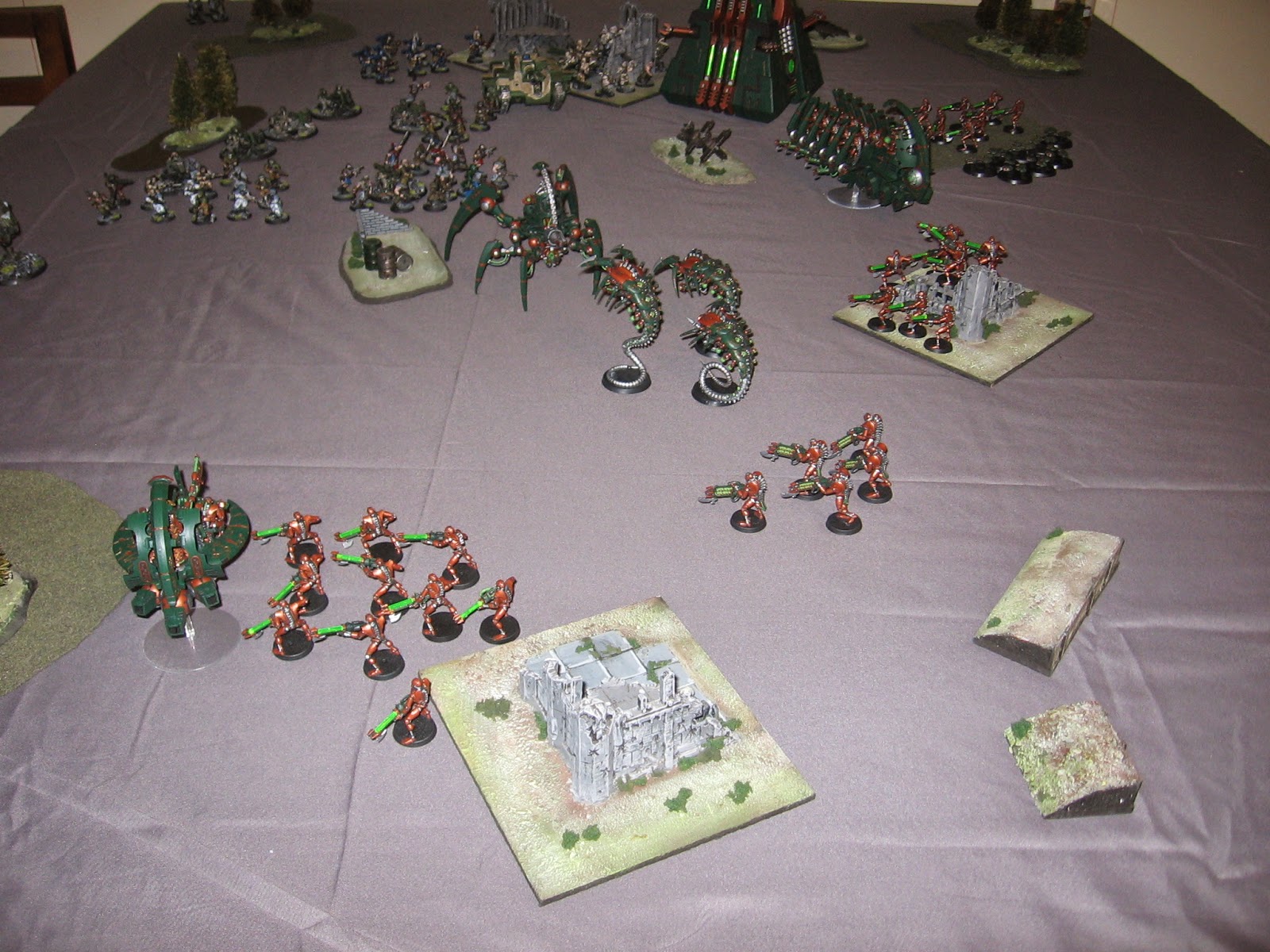 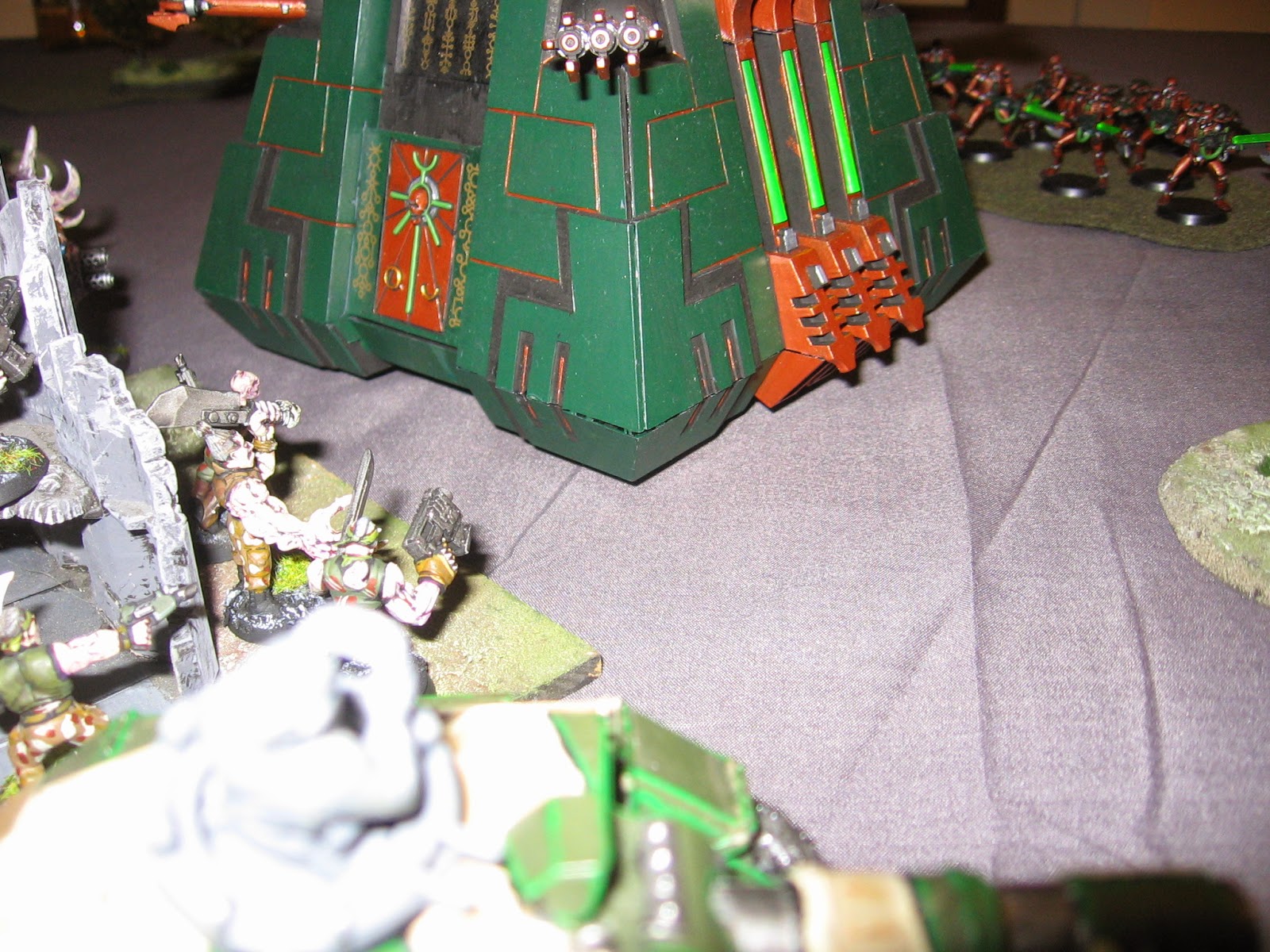 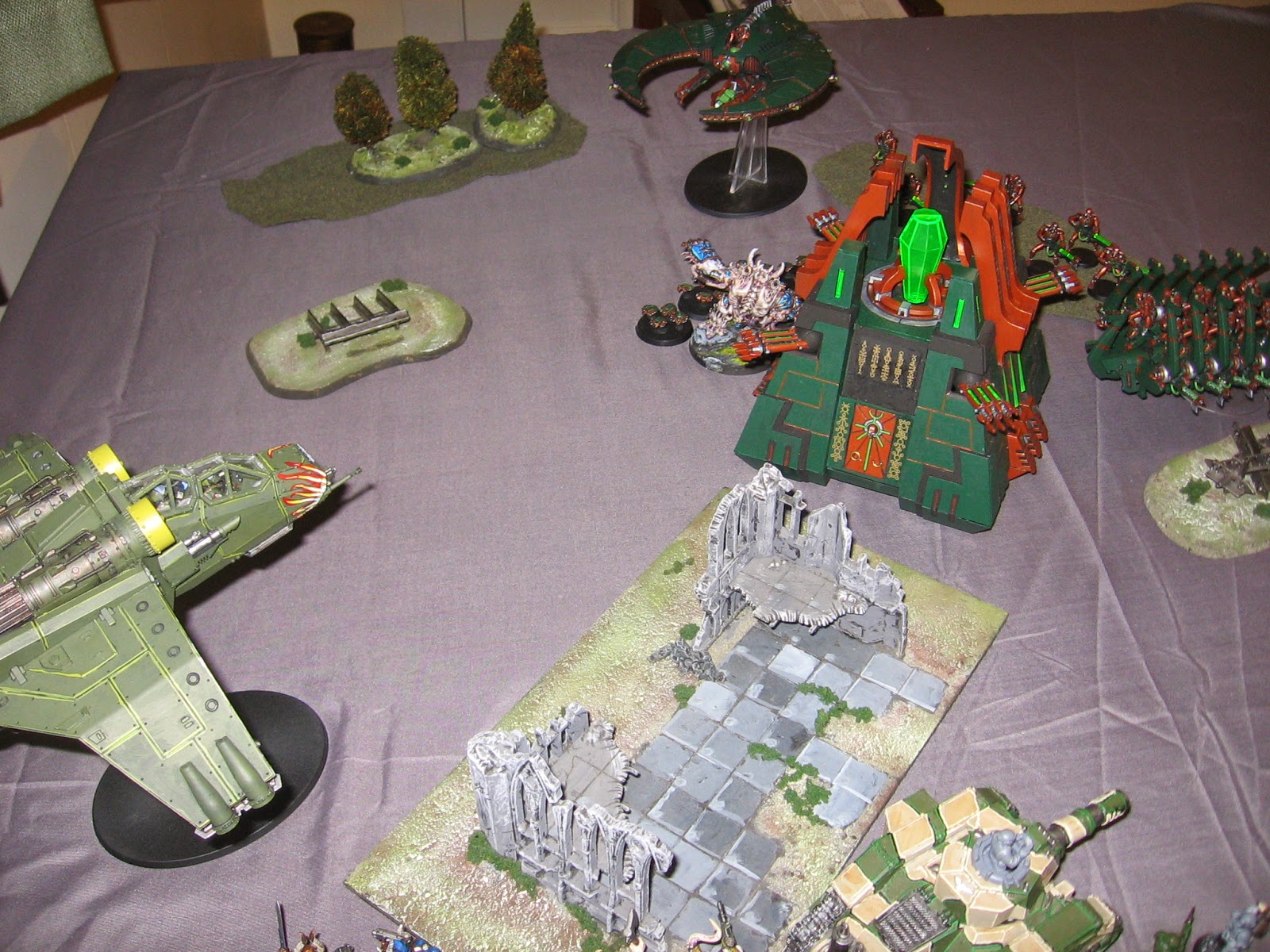 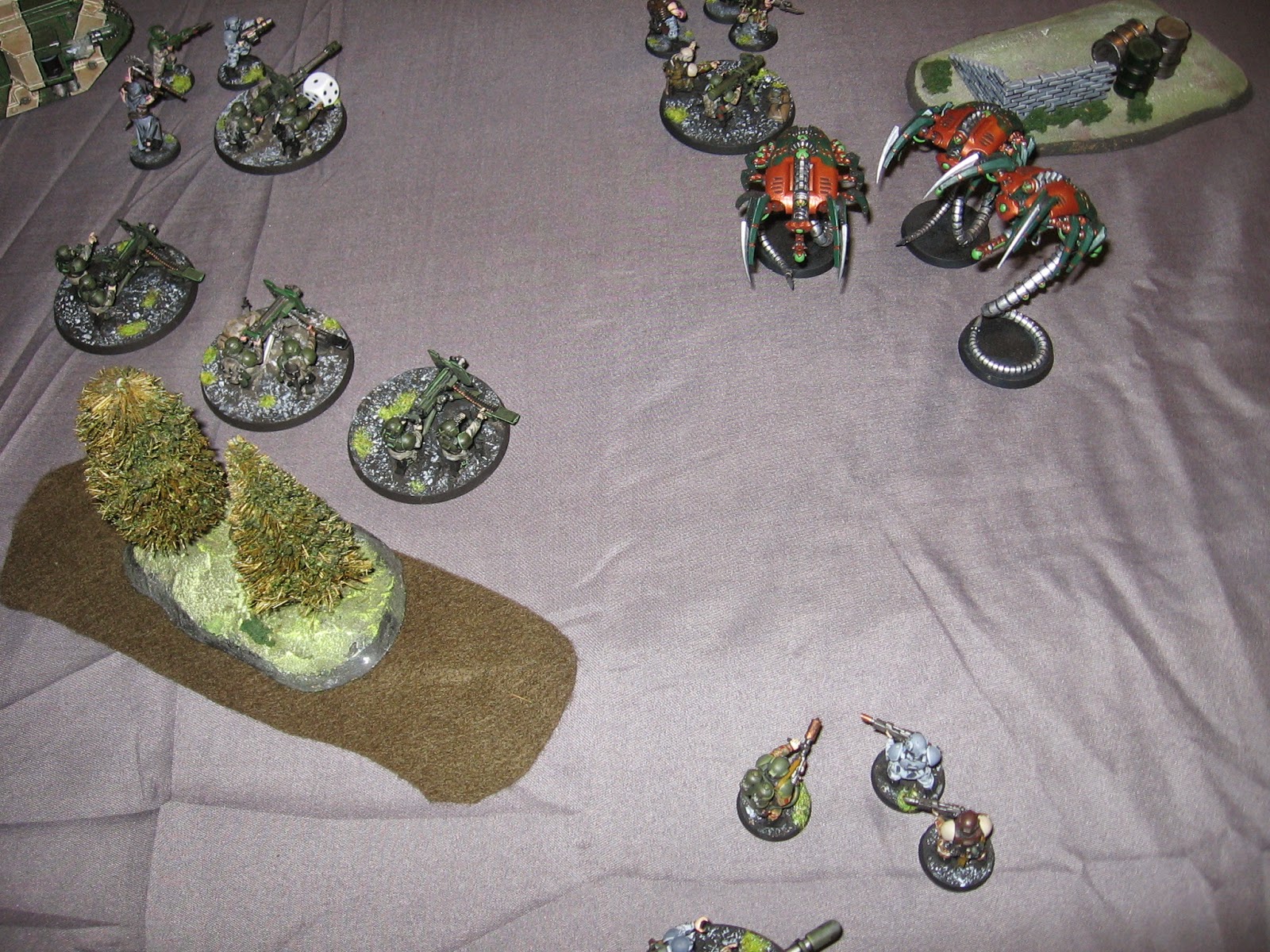 Interesting reflections, as the Lost and the Damned army had been comprehensively routed. I failed to use the not insignificant firepower of the traitor units themselves. I had taken a H/W option with each squad, and this shaped my playing mentality as I targeted the Necron H/Ws and vehicles with the H/W, meaning that the traitor firepower was never effectively used. It also meat that I played a very static game, sitting still to use the H/W firepower.

I had eliminated a lot of the support for the Necron warriors, but the warriors themselves were largely unscathed, and with those Gauss weapons were pretty capable of looking after themselves. I took those single H/W options because I thought they were 'characterful' in the context of an army of random traitors who had come together in rebellion.

However it doesn't seem to make a lot of playing sense. Next time I'll try a more orthodox OOB with H/Ws in separate squads. That's not quite per the 'Eye of Terror' codex OOB, but the army is meant to represent  traitorous desertion, and it is quiet possible that these traitors would take with them at least some of their training and thinking.

We have another game organised for  a fortnight's time. We'll see.
at September 07, 2014 4 comments: