Last night we played a trial game of Mantic's new science fiction game Warpath. We have played a few games of their new fantasy rules set 'Kings of War', and found that we really like them, so we were keen to try their science fiction equivalent.

The big appeal for us is the simplicity of the rules. We have tried the Games Workshop Fantasy and 40K rules (and have certainly played quite abit of 40K), and the thing we most struggle with is what for us is unnecessary complexity. Now don't get me wrong, this isn't an attack on GW rules. I know thousands play and enjoy them, and good on them. The issue for us is that we are peripatetic in our wargaming tastes, so we might play one rules system for half a dozen games, and then move on to something else that appeals to our interests. The rules book/army book structure of the GW rules systems means that to play the game you must be familiar with the rules book, your own army book, and other army books too, if the game is to play well. This works well if this is your game of choice and you play it regularly, but frankly we just can't remember enough of them from one series of games to the next to make playing the games enjoyable. We found that with Kings of War,  after three games, we were playing the games quickly and confidently, and they were good games. So because Warpath is based on similar principles to KoW, it was inevitable that we would try Warpath too.

The game played reasonably easily, although busy work lives for us all meant that we hadn't really read them thoroughly enough before we played. Consequently we made several mistakes in turn sequence. However despite this it was very easy to make our way around the rules. The fact that there are only two 'races' or army lists available at the moment meant that we used GW figures as 'proxies', so my GW orcs were Marauders and Adrian's Eldar were Forgefathers (odd, I know).

We felt that there was a potential balance issue with one of the Forgefathers fire based units in particular, but we also fell into the trap of trying to play the game as if it were 40K, and it's not. This meant that units lasted differently, with a Marauder unit disappearing after one turn of fire, having taken heavy casualties and then failing its nerve test, while other units lasted the whole game. We also noted that vehicles last differently on the table - personally I liked this aspect of the game, although we felt that there was plenty of potential for unlikely vehicle play with vehicles chasing each other to get flank and rear shots.

Finally as we dissected the game afterwards, we definitely felt that, because the game is unit based, it would play very well with Epic scale figures, not that that it helpful because we all like the Epic rules. But the basing system used in Epic certainly lends itself to the rules.

Anyway, there are some initial thoughts. here are a few photos of the game.. it looked pretty much like any 40K game because of the figures we used, so I haven't overdone it. 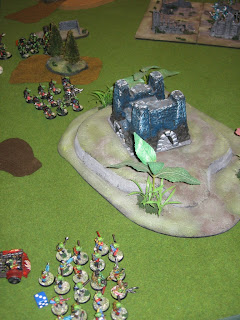 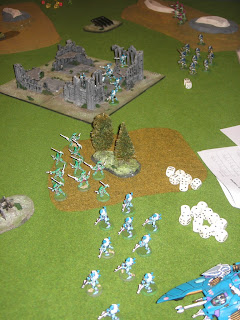 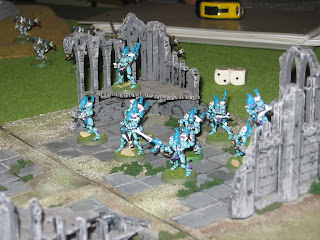 The victors always write the history, and never more so than the history of the First World War. The legacy of the history has perhaps been almost as traumatic as the legacy of the war itself with so much written to be little more than self-serving justification.
The ‘revisionist’ movement of historians perhaps began with the early writings of John Terraine and the late Paddy Griffiths, both of them more interested in looking at the primary sources than in repeating the ‘perceived wisdom’ that had preceded their own writings. And so it is with perhaps some of the most recent material that is now being published.
The most recent to hit my bookshelves is “The German Army at Ypres 1914” by Jack Sheldon (Pen and Sword 2010, ISBN 978 1 84884 1130). Sheldon’s most recent offering is perhaps the history that should have been written so many years ago, using many primary German sources for what may well be the first time. So much German archive material was lost in the allied bombing of 1944/45, but Sheldon has delved into the untouched Bavarian archives, and a great deal more, to piece together a work that is not only analytical and critical, but also,  by using a great deal of letter and diary material, offers a deeply personal and moving insight into the trials and agonies of the German soldier in those months of 1914.
Sheldon can hardly be tarred with the brush of German apologist, offering as he does a critical and at times justifiably scathing analysis of the performance of the German High Command, documenting failings at many levels. The one thing he is never critical of however is the willingness of young German men to go forward, to do their duty as they saw it. In this they have everything in common with the young men of every nation, and in seeing them in this light they are less demonized and more humanized than they have perhaps been presented in any preceding history.
Much of the revisionist writing over recent decades has focused on debunking many of the myths that have been perpetuated in those first five decades after the war. Sheldon admirably continues this tradition, and one of the more delightful pieces comes with his debunking of the ‘Myth of Langemark’ which held that German soldiers marched forward singing ‘Deutchsland Deutchsland” to the accompaniment of regimental bands. In a footnote to the peuniultimate chapter ‘Endgame at Langemark’   Sheldon wryly notes:

“So we are invited to believe that on a battlefield, under heavy fire and when they are desperately needed at the front, a band of men stopped for some time to listen to a folksong, some dance music and military marches before joining in for a jolly old sing song round a miraculously surviving piano in the mud of a blasted village. Hmm.” (Page 313)

I grinned as I read this. I am something of a revisionist of the history of the First World War myself, but I hasten to add never an apologist. As with his earlier book ‘The German Army on the Somme 1914-1916’, Sheldon has made an invaluable contribution to our understanding of the events of the battles and the men involved, and of the deep human tragedy that is warfare in general.
Thanks!!
I highly recommend this book to anyone with even a passing interest in the First World war.
at September 04, 2011 No comments: