Minor matter of some minor miners...

The latest stage in the plan to build a Warhammer Fantasy army.. the Dwarves: two units of miners... I plan to take two units to provide me with some tactical flexibility, even though I know that these aren't exactly the toughest boys in the game. As they say, it's not just about what you've got, but also about how you use it... well that's what I've always said, anyway!!
However, what's with the candles on the picks and helmets? I know this is fantasy, but - naked flames in the confines of underground mines? He! he!... flaming beards abound!!!! 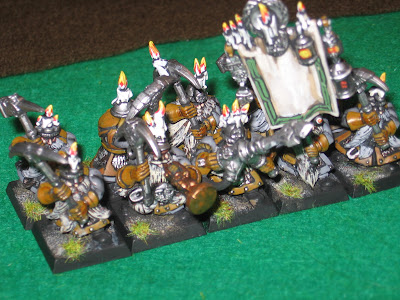 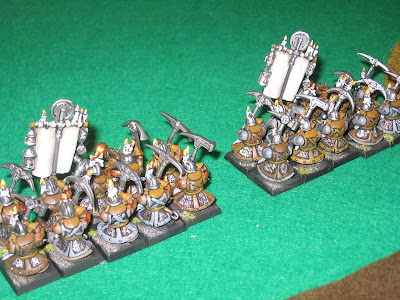 The boys are pretty keen to get into action.. as you can see here. So keen in fact that it was difficult to keep them in orderly ranks.. lots of rumbling in the ranks!!! 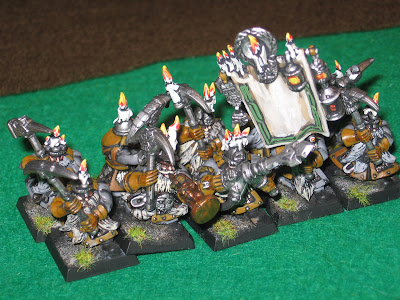 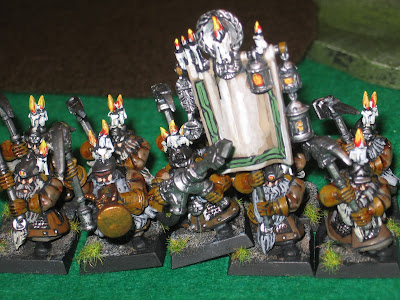 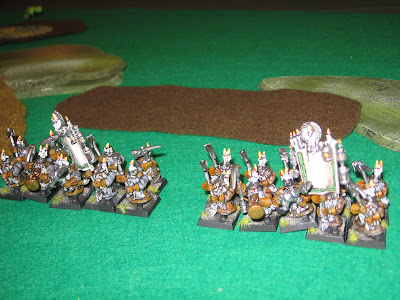 My great uncle Jack (37491 Sapper Jack Wesley, of the NZ Engineer Tunnelling company) died on 2nd October 1917. His service record gives no clues about how he died, what he was doing, or exactly where he died. It just says 'Killed in action in Field Belgium'. His body lies in the cemetery Faubourg d'Amiens at Arras. I guess he was luckier than some (if you could call it that); at least his body was identifiable and able to be buried in a 'known' grave.

But he remains a family mystery, other than the fact that he was my mother's uncle because, you see, my mother didn't talk about her family (neither did my father talk about his family really). All we have to go on is a slightly charred photo of Jack (and I have the feeling that there is a story there somewhere too, about how the photo came to be charred around the edges, as if rescued from a fire somewhere), and a photocopy of his service record that we requested and received from the NZ Defence Forces. The record tells us that he had been a bit of a lad in his relatively brief time in the army (with several visits to hospital for what might more delicately be described as 'social diseases' of the time).

So apart from these few scant details Jack's life remains something of an enigma that, while hardly keeping me awake at night, still puzzles me whenever I open my bedside draw and see his photo sitting there. The year before last I read 'Birdsong', a novel by Sebastian Faulkes. The book details the life of soldiers serving in the English tunnelling units. The imagery in the book is vivid; as I read I recall feeling the cloying sense of claustrophobia that must have been the daily reality for these men. Had this been the experience, the life, of Jack Wesley?

Several years ago Lorraine and I visited the tunnels (or Boves) beneath Arras. Had Jack walked that way 90 years before? We visited his grave at Faubourg d'Amiens, and were deeply saddened that we were probably the first family members to have visited his grave since his body was interred there. We will go back. Jack is our personal connection with the millions of lives lost in the Great War. We still puzzle over what his life was like, and how he was lost to his family. That is of course the story of an entire generation; that is why we see so many stone memorials in any town we visit in New Zealand, and would do in any other nation involved in the war.

I have read a great deal about Sir Douglas HHHaig, most of it not very complimentary (although I have yet to read Lloyd George's acerbic 'War Memoirs' that did so much to determine how generations of readers have since perceived Haig's performance in and contribution to the Great War). I have to admit to being firmly in the 'revisionist' camp when it comes to looking at Haig as commander of the BEF, having first had my eyes opened by reading the works of John Terraine. I have read a great deal since, all of which has made me even more determined to discount the 'lions lead by donkeys' views. Here is an excellent article by Dr Gary Sheffield on this issue.

So it was with interest that I bought a copy of 'The Good Soldier: The Biography of Douglas Haig', by Gary Mead. In my opinion, the book is the fairest biography yet. I can do little but quote some of the statements printed on the cover.

'The best and fairest biography of Haig that I have read', Allan Massie, Daily Telegraph.

'Very readable and valuable …. Mead's Haig is not a marble statue, nor a caricature butcher and bungler, but a man of very human strengths and weaknesses', Gary Sheffield, TLS.

I've quoted these not because I want to do a blog promo on the book (although I do), but because they state exactly how I felt after I'd read this book. Haig is portrayed as a man with strengths and weaknesses, or perhaps I should say 'as a man'. Not the most brilliant general that lived, and indeed a general who made mistakes (most prominent amongst these must be the decisions to continue with the Somme and Passchendaele battles well after he should have called time), he was a good administrator, a man open to new ideas and technologies, and a man who was determined to see the war through to a conclusion.

I would thoroughly recommend this book to anyone wanting a balanced view of Haig the man and the general.