Just prior to Christmas this year I picked up a copy of 'Paradise Lost' by Giles Milton. The book chronicles the destruction of Smyrna (modern day Izmir) on the coast of Turkey in 1922.

Alongside my interest in World War 1 runs a fascination with the periods in world history that both lead up to the conflict, and lead on from it. So I try to read widely about conflict ranging from the Franco Prussian War, to the Russian Civil War.

In this particular case the conflict at the heart of the book is that between Greece and Turkey, a conflict as old as civilization perhaps, a conflict that had already flared up earlier in the twentieth century with the Balkan Wars of 1912 and 1913.

Milton's account chronicles life in Smyrna prior to WW1, the tense times for inhabitants in the city during the war, and the events that lead up to the sacking and destruction of the city in 1922.

Milton manages to write a thoroughly engaging and readable piece of history using extensive archival material, and memoirs of many people who were a part of the society and were witness to the catastrophic events of the period. These memoirs provide frighteningly real descriptions of the ferocity of this racial conflict, despite the fact that the city of Smyrna itself had been 'that most cosmopolitan of cities' with all major racial groups (Turkish, Greek, Armenian, Jewish, European) apparently living and working together in harmony.

The Greek campaign in Anatolia in 1921/22 is detailed sufficiently for the reader to gain a clear understanding of the events that unfolded, but there is too little detail to understand more than the rudimentary military maneuverings of the conflict itself. The focus is more squarely on the fate of the city of Smyrna itself, and the enormous humanitarian crisis that took place as a consequence. Milton describes this as possibly the greatest humanitarian crisis of the 20th century, an interesting claim for a book written in 2009 with all the hindsight that history can provide of the tyrannies of Nazism, Stalinism, and the Balkans in the 1990s.

A simple Google Images search will yield plenty of material to give you an idea of the catastrophe that unfolded there in 1922.

Here is the Independent's review of the book, published by Hodder and Stoughton.
at January 09, 2010 No comments:

OK... DBA 15mm Spanish army, courtesy of Corvus Belli, done!!! I've struggled with my eyesight and painting over the last year, so most of 2009's effort has been 28mm GW figures (those Dwarfs), but I actually managed these 15mm figures pretty well (although as it's holiday time I've had the luxury of painting in bright daylight. I think that that has helped).

I layered the paint on these figures, and this is especially obvious on the shields. I'm not quite sure if the final result is the effect I wanted, but I'm not redoing them. And those shields are likely to be the death of me anyway, as I am having trouble keeping them on the figures, despite the use of good quality Superglue... we'll have to wait and see how they withstand game play. 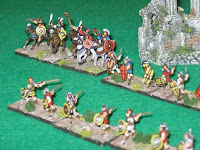 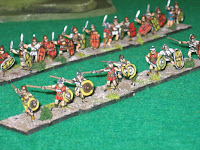 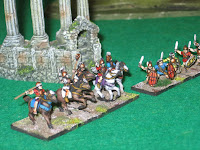 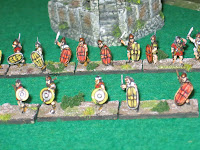 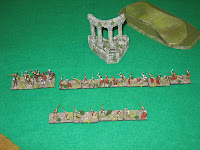 So .. cross that project off the list. Now on to those ANZAC heavy weapons from Hat.. they've been waiting for a while, then the VSF British HotT army.. ever the optimist, eh???
at January 03, 2010 10 comments: