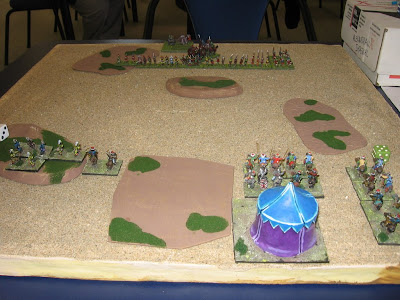 Wow!! well that was it.. my first tournament or competition in 27 years, DBA at the Timaru Armchair generals Convention (TAGCon) 2008.
A day of fantastic games with great people, each of 8 of us playing 7 games, with armies from Book 4. My own Ottomans fared pretty well i thought: 4 wins, 2 losses and a draw.. not bad for an army i'd used twice before (losing both games.
You see, I've never considered myself a Light Horse type of guy: give me some solid Romans, or Hoplites, any day. However I pretty soon became master of the 5 march moves opening gambit, positioning a column of light horse on my opponent's flank.
Anyway... here  is a taster, and a link to a pile of photos on the day.
Thanks to Dave Batchelor and his team for a tremendously well organised and jolly good fun day.
at August 24, 2008 No comments: