We have confirmed a date for Christchurch's first full HotT tournament (I think it's the first!!!): it is 30 November, as a part of the "Carnage" tournament.
This is a full on Fantasy Wargames day at the Woolston Club, with the HotT Tournament, and a WFB tournament.

Gather your Ghouls
Patch up your pirates
Zap your Zombies

and get ready for HotT Carnage...

I am looking at using the Berkeley HotT tournament rules (I hope the Berkeley guys take that as the compliment it's intended to be).
So watch out for details .. in th meantime.. back to the spiders..... which incidentally had their first outing today. Lost the first game.. wow!! warbands sure eat Hordes as my hordes found out, but won their second. The two heroes did the business while the Hordes held up the larger part of the opposing army, dying regularly, but coming back often.. now that was a good feeling.
So I think this horde army could work well if handled with care.
at September 06, 2008 1 comment:

There I was in a local bookstore, and there they were.. packets of small black plastic spiders, 12 to a packet for $2 ("Ming Shing Creepy Spiders") - love at first sight, really!!!. It's a mark of obsession I guess, but my first thought wasn't 'oo, creepy black Spiders', it was... 'Oo look, Hordes'.... I saw creepy hordes of spiders scuttling across a barren landscape, the bases with enough terrain on them to suggest unstoppable spiders climbing over everything, nothing standing in their way.
So, 24 Horde bases? Well, a lot of horde bases, but maybe a few other things as well. Down the aisle of the mall was a 'Nature's Discoveries' shop.. full of neat plastic animals and insects: arise two spider heroes, rather large creatures, guaranteed to creep even the hardiest player. One is a hairy looking Tarantula, the other a shiny redback, a Katipo spider, both nasty creatures for those of us with arachnophobia.
So far, the army has 12 Horde bases, and 2 Heroes.
More to come.. I'd first thought spiders could also be sneakers and lurkers, but on reflection maybe just lurkers? I was after a different HotT army to my other three, and lots of Hordes seemed to be very different in composition to the other three armies. I certainly expect this army to play differently to the others. We'll see. 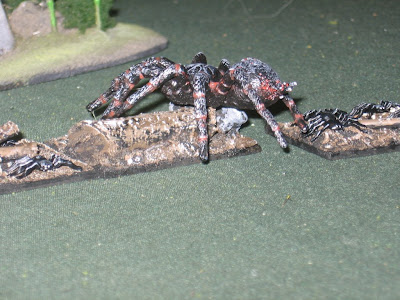 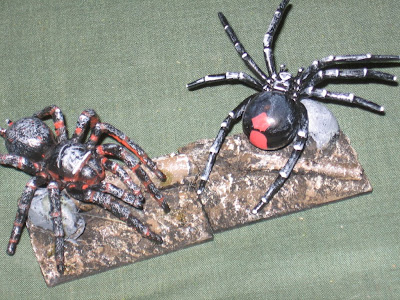 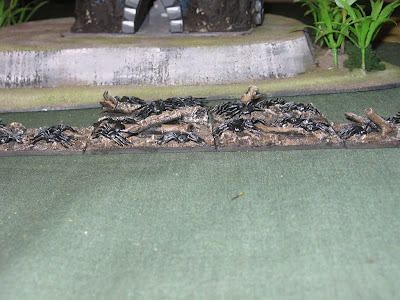 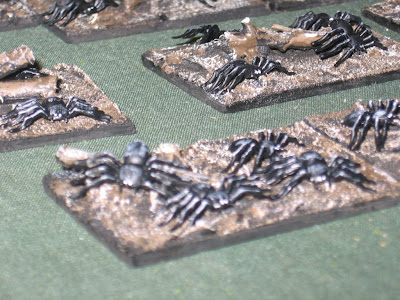 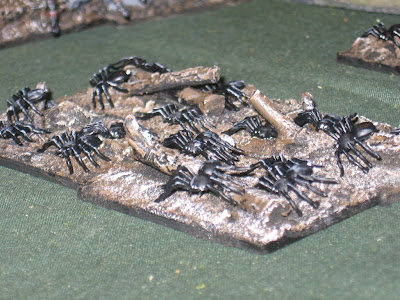 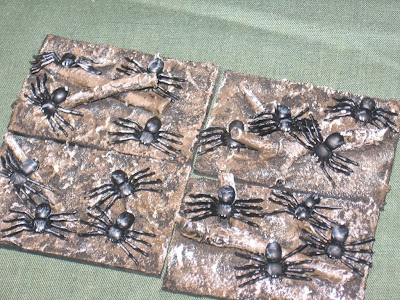 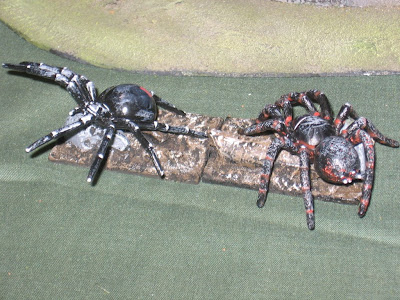 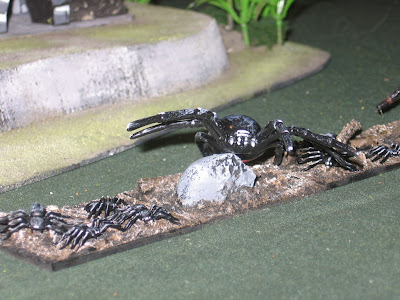