Well, after months of planning 'The Guns of August'  is over. Six guys, 24 Great War Spearhead divisions, over 3 days.... and that's the first battle of the Marne re-fought.

Play started last Friday, as we fought the preliminary meeting engagements of the battle. These actions then fed into the main event on day 2. The most important impacts were that the French were able to turn the German left, while the BEF successfully pushed back the German cavalry on the German right.

The impact: the French started in an advantageous position on the German left, while the BEF was able to deploy straight onto their table at the start of the main battle. Over the two days, the German Guards corps was lost (gulp, honestly, it wasn't me who commanded them....).

There were few chances for the Germans to break through the allied lines, the best chance seemed to lie in an attack by the Guard corps against that part of the allied position held by the French cavalry.  Unfortunately the amount of artillery allocated in support of the cavalry was so great that the Guard was seriously under strength by the time they reached the French lines. Early successes were not sustained and the Guard fell back in disorder: many of their colleagues lay where they had fallen. 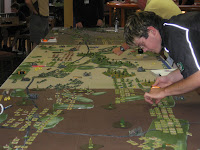 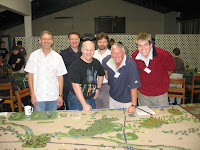 These photos show a view of the main table on days two and three, with the BEF nearest the camera. The players are, from left to right: Robin Sutton (that's me!!), Robert Dunlop (back row), Shawn Taylor, Stan Walker (back row), Jon Harding, and Nick Sutton.

We had a fantastic three days of great gaming and fantastic company.

Here's my chance to publicly thank the players (especially Robert who flew in from the UK, and Shawn who flew in from Canada), also the organisers of the New Zealand Natcon who put on the event (the Christchurch Cavaliers Club): thanks guys.

Thanks are also due to the product sponsors of the event:

These companies gave us fantastic support.... with fantastic products - thank you very much.